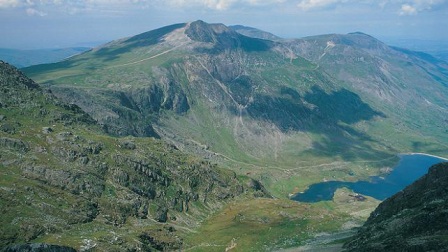 For a small country, Wales has some really big views. Mountains, hills and valleys define the landscape. Here are ten of the best places to stop and admire them.

Llyn Idwal and Tryfan Snowdonia
Cwm Idwal, a National Nature Reserve, is one of the best places in Wales to see landscapes and plant species which have barely changed since the Ice Age. On a calm day, Llyn Idwal is as smooth a mirror, with beautiful reflections of cliffs and sky. The unmistakeable shape of Tryfan makes a striking backdrop.

The Marquess of Anglesey’s Column
Gazing out over the Menia Strait and the Snowdonia peaks beyond is the bronze figure of Henry William Paget, first Marquess of Anglesey, who fought with Wellington at the Battle of Waterloo. You can climb his column via a narrow spiral staircase with 115 steps, leading to an open platform. Superb on a day that’s not too blowy.

Swallow Falls near Betws-y-Coed
This waterfall on the River Llugwy is one of the loveliest features of Wales’ most mountainous region. Since the Llugwy’s catchment area gets more rain than anywhere else in Britain, the falls usually have plenty of oomph. There are easy-to-reach viewpoints on each bank, very close to the rushing, foaming water.

Ffestiniog Railway from Porthmadog
For pure nostalgia, the sight of a steam locomotive chuffing through Snowdonia is pretty hard to beat. The Porthmadog Cob, the causeway over the mouth of the River Glaslyn, is just one of several vantage points you can enjoy in any season – even in the snow. Naturally, the views from inside the train are rather good, too.

Snowdonia from Mount Snowdon
Whether you do it by train or under your own steam, there’s much to be gained from climbing Wales’ highest mountain – not least, the chance to enjoy our most memorable 360-degree views. The ridges and lakes of Snowdonia National Park stretch out in every direction. If it’s clear, you can see all the way to Ireland.

Llynnau Cregennen, Snowdonia
Llynnau Cregennen is a photographer’s favourite. Under a brooding dawn sky, with autumn mist tumbling down from Cadair Idris, it looks quite spectacular. But it’s just as delightful on a spring afternoon. Hikers know it as a stop on the Mawddach Way – an enjoyable, circular 31-mile route from Barmouth.

Foel Fadian, Cambrian Mountains
Look north from the summit of Foel Fadian and the faraway peaks of Snowdonia dominate the horizon – dark in summer, snow-dusted in winter. Just below the walk to the top, near the road, is a stone toposcope dedicated to the Welsh journalist Wynford Vaughan-Thomas. He considered this view the best in Wales.

Pen y Fan from Llangorse Lake
Sheltered in the lee of the Black Mountains, Llangorse is a lake where history and myth run deep. Its reconstructed crannog, or man-made island stronghold, marks the site of a 10th century palace, close to the water’s edge. The lakeshore is a picturesque place to stop and admire the highest peaks in southern Britain.

Sugar Loaf from Blorenge
The hike up Blorenge from Abergavenny is steep, but worth it. The heather-strewn plateau at the top, a Site of Special Scientific Interest, offers splendid views across the Usk Valley to Sugar Loaf, the southern most peak in the Black Mountains, with the Monmouthshire and Brecon Canal snaking along below.

Carreg Cennen Castle from Trapp
Explore the lanes around the Carmarthenshire hamlet of Trapp, and gaps in the hedgerows reveal glimpses of the enigmatic ruins of Carreg Cennen, on the edge of the Black Mountain Range. Immortalised by Turner in a swirl of stormy watercolour that’s now in Tate Britain, it’s one of Wales’ most romantic views.