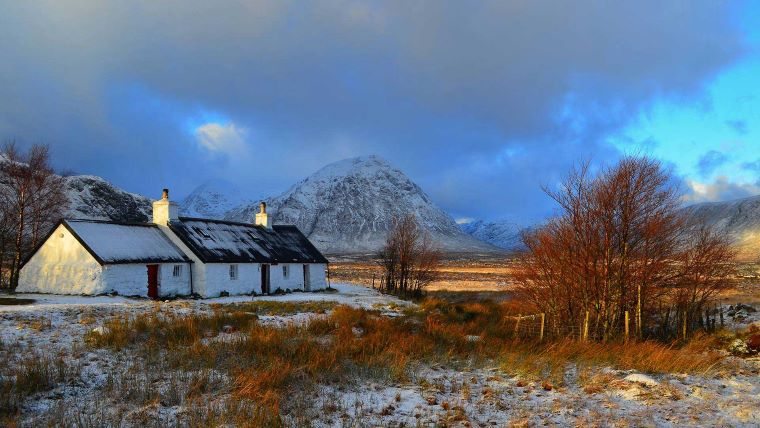 Moody, mist-shrouded mountains, snow-caked moorland, rushing burns and steely grey lochs: the Scottish Highlands are simply stunning in winter. They can also be magical, a Narnia-style wonderland enchanting to explore on foot, skis or snowshoes, and peppered with a clutch of new boltholes, gourmet hotels and log cabins, where you can defrost in front of a roaring fire with a warming dram.

Inn at John O’Groats, Caithness
Take a washed-up hotel on the far-flung north coast, strip it bare and add a rainbow-hued clapboard Nordic extension. What Natural Retreats has created with its multimillion-pound regeneration of this once-tacky tourist site and dilapidated, if iconic, hotel is more reinvention than revamp. The almost Disney-esque architectural creation now houses apartments with one, two or four bedrooms. Using local materials from Scottish larch to Caithness stone, the design features retro-style interiors with a Scandinavian vibe – and a playful element. Along with antler chandeliers and funky copper bathtubs, you’ll find light fixtures created out of lobster pots and rope. As storms lash the coastline, snuggle up and watch the waves churn.

Eagle Brae, near Glen Affric
Let’s be clear, if your wooden holiday home is made from flat planks not whole trunks, it’s a chalet, not a cabin. Eagle Brae, however, which opened at the end of the summer, is the real thing. The scattering of seven one- and two-bedroom log cabins on an 8,000-acre Highland estate have been hand-built with giant trunks of red cedar from British Columbia, using only chainsaws and chisels for that proper, rounded rusticity. Green wildflower roofs, a micro-hydro scheme and biomass wood-pellet burners for underfloor heating tick the sustainability box. Inside, the look is chunkily rustic: logburner, sturdy wooden beds, tartan throws and hand-carved panels of highland beasts and Celtic knotwork. It’s the real Davy Crockett deal.

Fonab Castle, Pitlochry
All turrets and sweeping views, this Scottish baronial retreat in warm sandstone was built for the Sandeman sherry and port dynasty in 1892. It was a Red Cross hospital during the first world war, and opened as a luxury hotel – think parquet floors, wood-panelling and the odd splash of tartan – this summer. There are 26 rooms, 13 in the original building (some with alcove turrets in which to curl up and gaze at the view) and 13 in a contemporary wing, with decking and direct access to Loch Faskally. Inspired by the colours of the Highlands, rooms feature Cole & Son wallpapers, White Company bedding and Nespresso machines. After a bracing walk, relax in the Malt Whisky Bar in front of a roaring fire.

The Duck’s Nest, Nethy Bridge, Cairngorms national park
First there was the Lazy Duck Hostel, a snug little barn with bunks sleeping eight, then came the Woodman’s Hut, a romantic eco-retreat for two, and now there’s the Duck’s Nest. Another hidey-hole on this six-acre family smallholding, this little wooden hut on the edge of a pond paddled by rare-breed ducks is a waterfowl-watcher’s dream. Snuggle under local Knockando Woolmill blankets on the terrace in front of the chimenea stove or take a dunk in the woodfired timber hot tub. The bush shower is also outside – as is the compost loo (for snowy nights, there is a potty). Inside, you’ll find a whisky-barrel lantern and a king-size box-bed with a skylight for stargazing. 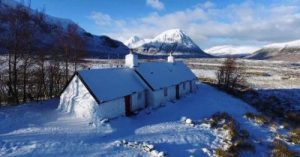 Mhor84 Motel, The Trossachs
The words “roadside motel” conjure a less than cosy image. However, the Lewis family (gourmet boutique hotel Monachyle Mhor at the end of the glen, MhorFish and MhorBread in nearby Callander) has turned the old Kinghouse Hotel on the A84 – hence the name – into a place where you’ll want to linger. The seven rooms have been given a lick of white paint, the bar and restaurant kitted out with a mix of old trestle tables and junk-shop finds. There’s vintage china, cowskin rugs, a pool table and comfy sofas for curling up in front of the fire.

Leachachan Barn, Loch Duich, Lochalsh
Once a byre for horses, this low-slung stone barn overlooking Loch Duich on the west coast has been sensitively converted into a striking, contemporary, open-plan holiday home by award-winning architects Rural Design. It’s a soaring vision of white with vaulted ceilings, antler chandelier, pale-oak parquet floors, apple-green sofas and state-of-the-art wood-burner. The ground-floor master bedroom is peppered with antiques; a second bedroom is up on a new mezzanine level. Picture windows frame views of the Five Sisters of Kintail, while Skye and the pretty village of Plockton, with its galleries, pubs and palm trees, is within hopping distance.

Flagstone Cottage, Castletown, Caithness
Bags of character in a tiny package, this single-storey, quarry-worker’s terraced cottage was renovated by The Prince’s Regeneration Trust and opened by Prince Charles himself in the summer. Once home to two families, today it sleeps just two in an original 4ft Scottish box bed with traditional kist, or chest, underneath. The colour scheme of dark grey and mustard adds to the cosiness as do the tongue and groove panels, Caithness stone floors, tasteful tartan throws, sheepskin rugs and toasty logburner.

Links House, Dornoch
After a windswept walk on the beach at Royal Dornoch, one of the prettiest spots on the north-east coast, sink into a bespoke tweed sofa by the roaring fire in the wood-panelled library of this elegant manse with a warming dram. Converted into a luxury hotel earlier this year, Links House has just eight sumptuous rooms, individually decorated with Italian-marble bathrooms, hand-picked antiques and named after famous Scottish salmon rivers: Brora, Beauly, Shin, Oykel, Helmsdale, Cassley, Conon and Carron. The hotel is scattered with quirky sporting memorabilia, the library is stocked with old books, and walls hung with oil paintings reflect the local landscape and Scottish field sports. After a gourmet dinner in front of another log fire in the dining room beneath a grand antler chandelier, step outside with a cigar from the humidor, gaze up at the starlit sky from the terrace – and warm yourself by the outdoor fireplace.

The Curved Stone House, Ullapool
A sleek, pale-wood sauna with a sea view is just one of the highlights of this sinewy new build hunkered into the hillside above Ullapool on the wild west coast. You can also soak up the picture-window panorama of the Summer Isles from the futuristic egg-shaped tub. Gavin and Rachel Anderson’s inspiration for their eco-friendly, turf-topped, stone and glass house, which sleeps four, came while living in east Africa, where the trend for luxury retreats designed to blend into the natural environment is well-established. They worked with a Hebridean architect and team of local craftsmen and artisans to bring their vision to life, adding underfloor heating for barefoot padding, soaring ceilings and a woodburning stove.

Vatersay Cottage, Fort Augustus
The Vivat Trust and Scottish Canals launched seven charmingly restored lock-keepers’ cottages along the Caledonian Canal this year. A feat of engineering genius, the canal links a series of lochs from the west coast to the east, slicing through the Highlands from Fort William to Inverness. Vatersay, which sleeps five, is one of a cluster of three cottages near Fort Augustus at the top of Loch Ness. The little whitewashed property has a red door and a picket fence. Inside, there’s a woodburning stove, pastel-painted tongue-and-groove panelling, cream wooden beds, a cheery colour scheme and a brightly patterned stag’s head on the wall.