THE 10 BEST SCOTTISH JOKES OF ALL TIME 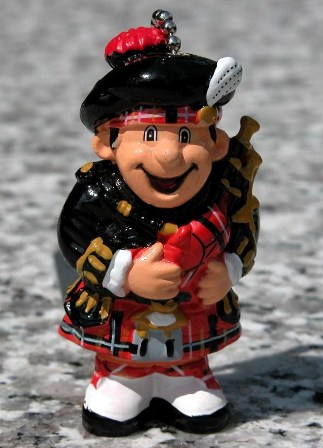 Tourist:  “I’m sorry, waiter, but I only have enough money for the bill. I have nothing left for a tip.”
Highland Waiter: “Let me add up that bill again sir.”

Sandy became depressed and decided to end it all by hanging himself. However, his friend Donald came along in the nick of time, cut the rope and saved his life. Sandy, true to form, sent Donald a bill for the cost of the rope.

Donald:  “Have you ever seen one of those new machines that can tell when a person is telling a lie?”
Sandy:  “Seen one? I married one!”

Tony Blair visits the hospital, Tony Blair, the British Prime Minister, is being shown around a hospital. Towards the end of the visit, he is shown into a ward with a number people with no obvious signs of injury or disease. He goes to greet the first patient and the chap replies: “Fair fa’ your honest sonsie face, Great chieftain e’ the puddin’ race! Aboon them a’ ye tak your place, Painch, tripe, or thairm; Weel are ye wordy o’ a grace as lang’s my arm.” Tony, being somewhat confused (easily done) goes to the next patient and greets him. The patient replies: “Some hae meat, and canna eat, and some wad eat that want it, but we hae meat and can eat, and sae the Lord be thankit.”The third starts rattling off as follows: “Wee sleekit, cow’rin, tim’rous beastie, O, what a panic’s in thy breastie! Thou need na start awa sae hasty, wi bickering brattle! I wad be laith to rin an chase thee, wi murdering pattle!” Tony turns to the doctor accompanying him and asks what sort of ward is this. A mental ward? “No,” replies the doctor, “It’s the Burns unit.”

Filming in Scotland can be a difficult task given the ever-changing patterns of weather – as the old saying goes – want to experience four seasons? Come to Scotland on a day trip! A film crew was filming in the highlands when an old Gaelic seer came hobbling by “Tomorrow rain” he informed them and hobbled on Sure enough it rained the very next day. Again he hobbled past. “Tomorrow sunshine” he let them know, and it was indeed a fine sunny day the next day. The director was mighty impressed and got the crew to hire him and every day the wise old sage predicted accurately what the weather would be. But after a couple of weeks the old man didn’t show up and eventually the director found him in a bothy. “Hey, we need your predictions, why aren’t you showing up.” “Radio broken.” the old man replied.

Big Shuggie is on holiday and is stuck at the airport, and proceeds to get very drunk. After about his tenth big swig at his bottle a little Japanese man accidentally bumps into him, causing the bottle to smash to the floor. Big Shuggie is furious, he grabs the wee fellah demanding recompense and drags him out of the building. Next thing he returns with bruises all over his face. Behind him is the Japanese man who is smiling. “It is just a small Japanese thing,” he explained to the crowd of waiting passengers, who were astonished, “We call it aikido.” But despite having been overwhelmed and tossed to the pavement, Big Shuggie’s ire builds up and once more he challenges the Japanese man to ‘go ootside’ They do and within a couple of minutes Shuggie is limping back into the building, with the smiling Japanese man behind him “It is just a small Japanese thing,” he explains once more to the impressed crowd, “We call it karate.” As the effects of his mauling at the hands of the wee man wears off, Big Shuggie once more bellows at the Japanese guy that he wants to take him outside and ‘batter him wan’ Sighing and shrugging his shoulders, the Japanese man accompanies Shuggie outside. A couple of minutes later the hushed crowd hear a thud, and Shuggie comes striding back into the airport building, beaming like a champion, “It wiz just a small Japanese thing,” he explains to them, “The bumper aff a Toyota!”

A teacher is asking the children in class about their ambitions in life and to tell the class in a rhyme. The class favourite puts up his hand, Miss, “My name is Dan, and when I’m a man, I would like to go to China and Japan”….”Very good Dan” comments the teacher. “Miss” cries out the class beauty, “My name is Mary Grady. When I become a lady, I would like to have a baby, maybe”….“Very good Mary..anyone else?” The wee Govan Terror at the back of the class stands up “Haw Miss, My name is also Dan, bugger China and Japan, If Mary Grady wants a baby……Dan’s yir bliddy man!!!”

Wee Shuggie is in a terrible state and goes to see a private therapist, too terrified to go to a doctor in case they declare him mad! “So how can I help?” asks the therapist “It’s like this, Ah’ve started getting these fears at night, and they are getting worse! I keep thinking somebody is under the bed, so I go down under it to look and no-one’s there, immediately, my brain tells me there’s somebody on top of it and this goes on all night – under – top – under – top. It’s driving me mental!” The therapist thinks for a bit and says, “I am positive I can cure you of this.” “Oh great!” says Wee Shuggie “Now, I want you to come and see me twice a week for the next six months for a two hour session each time.” says the therapist making some notes “And how much will that be?” asks wee Shuggie “£60 per session” the therapist informs him Shuggie leaves, troubled at the thought of all that money and goes for a consoling drink at his local. The therapist never sees wee Shuggie again, until one day months later he bumps into him in the street. He is surprised to see him look so well, not the sleep-deprived maniac he had last seen “Why did you never come back?” he asks Shug “At £60 a pop, twice a week for six months? You must be kidding! The barman at the local cured me for a tenner!” “How on earth did he do that?” “He told me to buy a saw and cut the legs off the bed!”

A Scotsman walked into a supermarket with his zipper down. A lady cashier walked up to him and said, “Your barracks door is open.” This is not a phrase we Scotsmen normally use so he went on his way looking a bit puzzled. When he was about done shopping, a man came up and said, “Your fly is open.” He zipped up and finished his shopping. He then intentionally got in the line to check out where the lady was who told him about his “barracks door.” He was planning to have a little fun with her. When he reached her counter he said, “When you saw my barracks door open did you see a Scottish soldier standing in there at attention?” The lady thought for a moment and said, “No, no. I didn’t. All I saw was a disabled veteran sitting on two duffle bags!!! .