The Beauty of Brittany 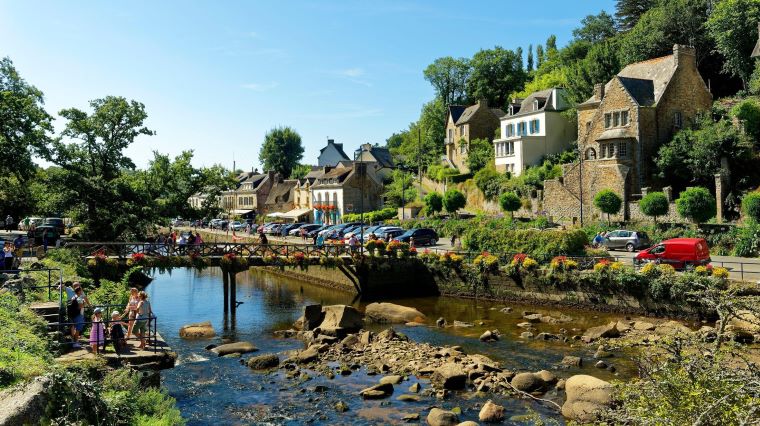 Brittany is one of France’s most distinctive regions, boasting its own language and a long history of traditions. It’s known for its Celtic heritage, some 3,000 megaliths from early human settlements, and the magical Brocéliande Forest of Arthurian legend. From medieval citadels to historic harbours, we chart Brittany’s most beautiful towns

Auray
Auray is best known for its cobbled streets, historical half-timbered houses and picturesque harbour, Saint-Goustan. The port served as a major trading site between the 17th and 19th centuries, even welcoming Benjamin Franklin, who arrived at Saint-Goustan in 1776 to solicit support during the American War of Independence. Nowadays it’s a yachting harbour with numerous restaurants and bars, an annual oyster festival, and regular book and craft fairs.

Carnac
Take a trip to Carnac if you’re interested in history; its megaliths date back to the same period as England’s Stonehenge. It’s thought that thousands of neolithic standing stones – also known as menhirs – were hewn from local rock and erected by the pre-Celtic people of Brittany between 3000 and 4000BCE – for reasons that remain a mystery. The town is divided into Carnac-Ville, with a historic 17th-century church and the artefact-laden Museum of Prehistory, and Carnac-Plages, an attractive seaside resort on Quiberon Bay, with large sandy beaches and a thalassotherapy centre.

Dinan
Dinan is one of Brittany’s best-preserved medieval-walled towns. It’s a designated Ville d’art et d’histoire (Town of Art and History), and it supports local artists and craftspeople at its weekly market, Place du Guesclin, named after a 14th-century knight. Walk along its 3km (2mi) long ramparts, climb the St Catherine Tower and brave the 158 steps of the Tour de l’Horloge (clock tower) in Vieux Dinan (old quarter), characterised by winding pedestrian streets and half-timbered houses.

Locronan
Locronan is home to the legend of Saint Ronan, after whom the town is named. Local tradition holds that he was a bishop from Ireland who came to find a hermitage (loc in Breton), and the St Ronan Church housing his relics remains a pilgrimage site today. You’ll come across well-preserved renaissance granite houses in this town, which has served as the location for several films, including A Very Long Engagement (2004) by French filmmaker Jean-Pierre Jeunet.

Paimpont
Stop by at Paimpont to discover the legendary forest of Brocéliande, which was supposedly home to King Arthur and the wizard Merlin. Many trails lead from the town into this ancient forest, and you can explore them on a guided tour or alone. Meanwhile, the town’s abbey, which traces back to 1199, sits on the sacred site of a seventh-century monastery on the shores of a small lake, Étang de Paimpont.

Ploumanac’h
Côte de Granit Rose (Pink Granite Coast) in northern Brittany, is a small village with a great beach. Pink granite rock formations form a surreal coastline, while the town’s active lighthouse stands prominently at the shoreline. Ploumanac’h features both a beach area (Ploumanac’h-Plage) and an inland village (Ploumanac’h-Bourg) – as is the case for most coastal towns in the region – between which lies a park with rock formations similar to those along the coast. 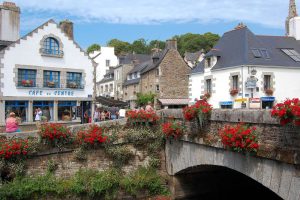 Pont-Aven
Pont-Aven, in the Finistère department in western Brittany, is an artistic haven known for the Pont-Aven School of painters, which ran from the 1850s until the 20th century. The school of painters was centred around artists Paul Gauguin and Émile Bernard, whose artworks depict village scenes – such as Gauguin’s Landscape at Pont-Aven. Elsewhere, in August, there’s a flower festival that celebrates Breton traditions.

Rochefort-en-Terre
Rochefort-en-Terre has won awards for being one of France’s most beautiful villages thanks to its half-timbered buildings and renaissance stone edifices. The village first garnered attention in 1907 when American painter Alfred Klots bought and renovated its medieval château. He encouraged the display of flowers in the town, which is a tradition that continues to this day.

Roscoff
Roscoff is recognized as one of the region’s “small towns of character”. It boasts a pleasant harbour and beaches that jut out into the Bay of Morlaix, while its town centre has maintained its architectural heritage of 16th- and 17th-century buildings. A short boat ride away is the small island of Île de Batz, which offers an idyllic getaway from the mainland.

Saint-Malo
Saint-Malo is one of the most popular destinations in Brittany. Its walled citadel, Intra Muros, is the main attraction; most of it was painstakingly restored after major destruction during World War II. The town is famous for being an important port during the 17th and 18th centuries, used by both trade ships and the notorious corsaires (privateers) employed as protection against the English. The city also enjoys a number of pleasant beaches and numerous seafood restaurants.

Rennes
Rennes is Brittany’s cultural and economic heart. Although much of it was destroyed by fire in 1720, its stately parliament building, town hall and numerous museums remain. Pass through the medieval city gate and marvel at wonky, half-timbered houses before wandering among roses at Thabor Gardens. With two universities and a medical school, Rennes thrums with students who enjoy coffee and Breton crêpes in cobbled-lane cafes, perfect for filling up before heading to the Saturday morning Place des Lices, one of France’s largest markets.

Brest
Discover one of France’s most picturesque natural harbours in Brest. Bisected by the Penfeld River and set on the coast, the port city pays homage to its naval heritage with a National Navy Museum and an innovative ocean discovery park, Océanopolis. Days in Brest are made for strolling along vibrant quays, shadowed by medieval fortifications, where workers hammer in the shipyards and seafood restaurants spill onto the pavements.

Vannes
Vannes, protected by ancient walls, is one of Brittany’s most-visited towns. The former trade port was built on a Roman site and today it boasts a maze-like network of narrow cobbled alleys that give way to traditional town squares. Leaning, cantilevered wooden buildings abound, complimented by the Italian renaissance-style Cathédrale Saint-Pierre, with its acclaimed 17th-century tapestries. Spend your days sampling local cider and shopping for cheese, visiting the art museum and soaking up Vannes’s old-world feel.

Quiberon
Quiberon is a narrow stretch of island-like land that juts 14km (9mi) into the sea. Come to explore its boardwalk boutiques and seafood eateries, where you can learn about the area’s famous canned sardines. Quiberon’s main attraction is its rugged coastline, most of which is a designated nature reserve. Long, windswept walks will take you past dunes and colourful heathland, sea caves and isolated coves where the current is too torrid for swimming.

Lorient
In summer, Lorient is a magnet for swanky international yachts that bob in the marina while their owners explore the town. Remnants of Lorient’s seafaring history can be found in an 18th-century watchtower, naval museum and a German submarine left from WWII when Allied bombs destroyed the town to block Nazi supplies. Visit during the famous Festival Interceltique de Lorient, which takes place every August, with performances held in the marina and bars across the town.