The Black Santa of Belfast 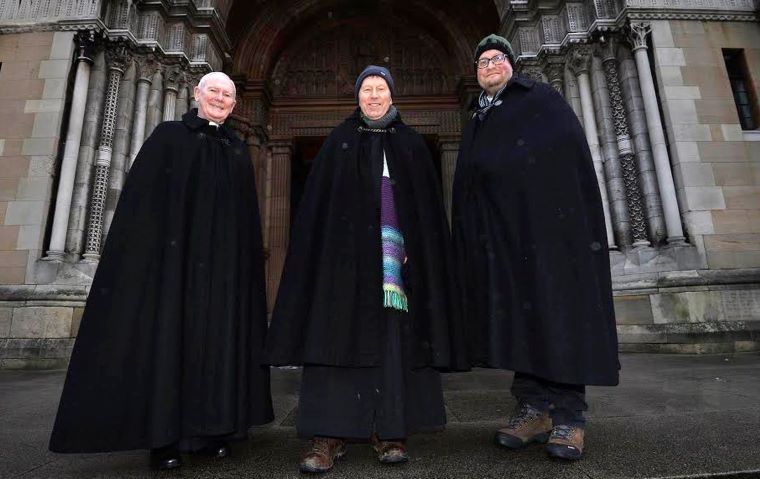 The clergyman unwinds a purple, green, grey and blue scarf — knitted for him by a 93-year-old resident of a Belfast nursing home — and wraps it three times around his neck. Inside the bronze West Door of Belfast’s cavernous, pillared St Anne’s Cathedral, he dons a long, black, hooded cloak, fastened at the neck by two brass clasps.

Dean John Mann is demonstrating how he’ll ward off rain, hail, sleet and snow while begging for charity on the Cathedral steps, from December 17 until nightfall on Christmas Eve.

“The cloak is for wearing at gravesides, so it’s fairly wind-proof,” the 63-year-old Dean explains. “I’ll wear multiple layers — the black cassock that’s used for all church services and extra layers of underwear, plus a black hat and gloves. Florence’s scarf, too – but not for sentimental reasons. It stops raindrops running down my back.”

Seven Christmas sit-outs as Belfast’s ‘Black Santa’ have taught the genial Londoner that he’ll need all the protection he can get maintaining a tradition started by Dean Samuel Crooks in 1976. More than 300 people were killed that year, the second most violent period of the Northern Ireland Troubles. Inflation stood at fifteen per cent.

“If ever there was a time not to appeal for money for renovations,” Dean Mann suggests, “that was it.”

But the unprecedented sight of a lone clergyman, defying winter’s ravages to collect for his beloved cathedral, stirred the consciences of Christmas shoppers and revelers. They responded magnificently, setting parcels and umbrellas aside, fumbling with numb, wet fingers to find money and drop it into a plastic bucket. Against all odds, the renovation costs were covered.

To acknowledge Belfast’s generosity and raise funds for local charities, Dean Crooks — in his distinctive black garb and woollen balaclava — repeated his sit-out annually until he retired in 1985. While violence convulsed the city, the solitary, hunched figure sat placidly at the Cathedral steps, pleading “Save the children, feed the hungry, heal the sick.” The public took the iconic cleric to their hearts, fondly dubbing him ‘Black Santa’.

4o+ years after the first vigil, peace has transformed the violence-scarred area around St Anne’s into Belfast’s vibrant, fashionable Cathedral Quarter. A heavy oak whiskey barrel from the world-famous Bushmills Distillery has replaced the plastic bucket. The Black Santa sit-out is as synonymous with a Belfast Christmas as the bratwurst, gluwein, lights and festive jumpers in the yuletide market at City Hall.

Belfast has contributed millions of pounds to the Black Santa Appeal. Eighty-five per cent goes back into the community, while the remainder supports Christian Aid. 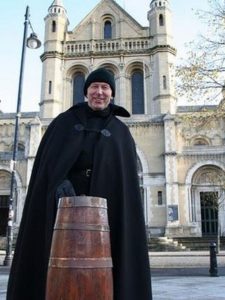 For initiatives like the L’Arche community’s Green Buds project, a grant of a few hundred pounds can cover half the annual budget. In lush, tranquil countryside, only twenty minutes beyond Belfast, the scheme brings together people with learning disabilities and those who support them, to produce vegetables and fruit.

The cawing of rooks, circling above the hillside allotments, is the only sound disturbing the silence on a recent sunny autumn morning. Four red hens, re-housed from a rescue centre, peck contentedly in their coop, tended lovingly by a young man with autism.

The manager, Indiana-born Scott Shively, strides between rows of kale, chard and wilting, end-of-season sunflowers, and points towards the misty horizon.

“When it’s clear, you can see Scotland. That’s Strangford Lough down there. The guys just love the peace and quiet and open space.”

Inside a cluttered wooden shed, where workers seek time alone, Scott offers me a coffee made possible by Black Santa funding. A row of waterproof jackets hanging on metal hooks are also thanks to Black Santa.

The Appeal accepts donations all year round but attaches great significance to the physical act of placing cash in the wooden barrel. Adults who visited Black Santa as youngsters return with their children, introducing them to the idea of charitable giving.

“They’ll set 2o pence aside from their weekly pocket money and just before Christmas they’ll bring it to Black Santa. Watching children emptying their piggy banks, encouraged by parents who’ve done likewise, is always touching. It signifies something deeper than the coins trickling through their fingers.”

The Dean relishes the opportunity that the sit-out provides for reflecting on “community, charity, Christmas and consumerism” and engaging with people he wouldn’t otherwise meet.

“People tell me, ‘I’m giving £50 because that’s what I usually spend on Christmas cards. I’m sending emails this year instead.’ My wife, Helen, and I send lots of cards, so gestures like that challenge me personally,” he concedes. “They make me think.

“Every year, the Appeal touches certain people in a particular way and they’ll drop thick envelopes containing hundreds of pounds into the barrel. Almost always, they’ll do it without a word. They just drop them in and walk off.”

School choirs and carol singers fill the air with festive music. Despite the chill, shoppers linger for a chat, raising personal or social issues. “Occasionally, somebody asks a heavy theological question. It’s handy to have a bishop nearby to deal with that,” he jokes. 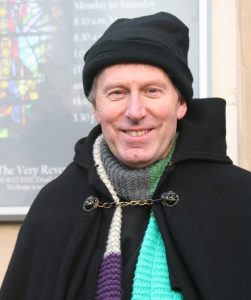 The eight-day sit-out is not for the faint-hearted. Dean Crooks staged a loan vigil but since Dean Jack Shearer’s tenure, other clerics have taken turns accompanying Black Santa.

Retired Canon Douglas Goddard admits that if he’d received the slightest encouragement in 2010 from the third Black Santa, Dean Houston McKelvey, he’d have abandoned the sit-out “in a flash”.

That December is the coldest on record for Northern Ireland, with an average temperature of -0.6 Celsius. Snow and ice disrupted transport and schools. Home-heating oil froze.

“Even at the best of times, a bitter wind blows through Donegall Street, wallops the Cathedral and ends up at your back. But 2010 will never be forgotten.

“The longest we could bear to stay outside was thirty minutes. We’d go inside to thaw, then come out again and find ourselves back at square one.”

Canon Goddard insists, however, that Belfast’s extraordinary generosity means the tradition is destined to flourish. He recalls being summoned to meet a frail, elderly woman at the West Door. After helping her down the steps into a waiting taxi, he discovered that an envelope she’d left contained £2,000. “That woman didn’t look like she could afford it. What generosity.”

Stories abound of incredible selflessness by people of all backgrounds and faiths. The ‘Pennies from Heaven’ project at Fleming Fulton School has raised thousands of pounds by collecting coins in Coca-Cola bottles. Its pupils, who cope with physical disability, travel by minibus to deliver their contributions each December.

The late Dean Shearer related how a man once left a plastic bag silently beside him. It contained £30,000 in bank notes and a message stating it was a dying man’s instruction that Black Santa should receive it. The Dean maintained, however, that his greatest ever donation was a £5 note handed over by an unemployed man and his sons.

Séamas Ó Donnghaile, the head-teacher at a small, Irish-language primary school in nationalist north Belfast, asserts that the Appeal is proof that “people with very little always have enough to share.”

His 85-pupil Bunscoil Mhic Reachtain is situated in a busy side street in Northern Ireland’s third poorest neighbourhood, close to a maze of motorways and overpasses. It occupies what was originally a ‘ragged, industrial school’, built in 1908 so that “necessitous children would be gratuitously fed”.

Watched by a dozen helmeted youngsters who’re practicing their hurling skills, Séamas borrows a hurl and slams a sliotar against the playground’s red-brick wall.

“Revival of Irish language and culture is my heart, breath and thinking,” he declares, “but it’s second always to community revival.

“I want to instill Black Santa’s example in the mindsets of the children we are preparing to be tomorrow’s leaders. What he does reminds us to look beyond the ends of our noses. It’s about reaching out to people less fortunate than ourselves.” 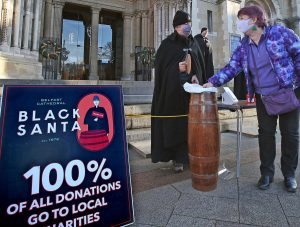 Before the school closes for Christmas, the children will brave the cold and “skip” the 500 meters to St Anne’s, laden with money they’ve collected. Last year, they brought their tin-whistles and played traditional Irish tunes inside the Cathedral. Dean Mann, an accomplished violinist, joined in.

“Just because the Cathedral isn’t a Catholic church, doesn’t mean we can’t support and be proud of the great work it’s doing,” Séamas remarks. “The children love the notion of helping others. They’re confident they’re doing something good.”

Back on the allotments, as a fellow gardener drops off a bale of straw for the hens, Scott looks forward to ‘Good Samaritan Sunday’ in February when the emphasis switches from givers to receivers.

Representatives of 200 organizations who’ve applied successfully for help will file into the Cathedral — under carved stonework depicting the triumph of peace and righteousness — and receive Black Santa cheques for up to £1,000.

“Despite the post-Christmas gloom, it’s always amazing,” Scott smiles. “You get a great sense of how the community supports the Appeal. It’s a reminder that we’re not alone — and that’s a great feeling.”

This year, over 40 years will have passed since “an extraordinary man with a particular set of circumstances” urged the people of Belfast to “save the children, feed the hungry, heal the sick.” Since then, Belfast has been unstinting in its support for Black Santa.

“This Appeal is from the community, for the community,” Dean Mann explains. “It’s about a city that’s been painted in a negative light for too long. Despite the bad times they endured, people worked hard to maintain the community spirit that Belfast’s so good at. Black Santa feeds into that.”