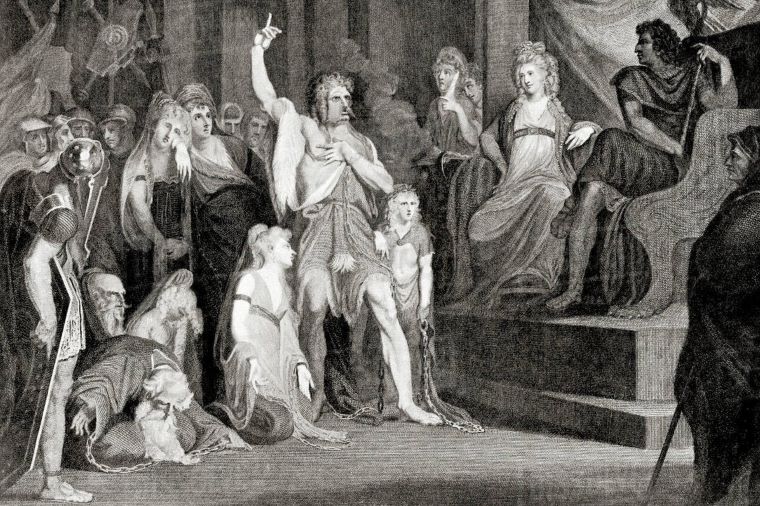 Caractacus was a Celtic king and tribal leader of the ancient Britons during the Iron Age and the ruler of the Catuvellaunui, a powerful British tribe. He was the son of a Celtic king named Cunobeline and ruled Briton from 43-50 AD. Caractacus is associated with the expansion of his tribe’s territory with his apparent success being a catalyst for the Roman invasion of Britain. When the Romans launched their invasion in the summer of 43 AD they attempted to absorb it into the Roman empire. While other tribes in Britain, such as the Dobunni, submitted to the Romans, Caractacus fought fiercely for the independence of his people.

When the Emperor Claudius launched an invasion of Britain, it was a massive undertaking and intervention which would ultimately lead to more than 350 years of Roman control. Four legions supported by auxiliary troops made up an invasion force of more than 40,000 men. Despite what must have seemed like overwhelming Roman strength, there was strong native resistance. The land that is now Britain wasn’t fully conquered until nearly 40 years after the initial invasion and even then, Rome never fully succeeded in conquering and subduing all of the peoples. There was always a need for a significant military presence to control the threat from unconquered tribes and the vast majority of the populace would remain relatively untouched by Roman civilization.  However, Caractacus and his people were not so fortunate.

Despite a valiant attempt at opposing the Romans, Caractacus was defeated by the Romans at the Battle of Medway. Despite being pursued by the empire, he managed to slip away and hold out for seven years in the Welsh mountains where he carried on a type of guerrilla warfare against them. Caractacus was finally defeated at The Battle of Caer Caradoc in Wales to Roman governor, Ostorious Scapula in 51 AD. As he was not killed in battle, he fled northward and took refuge with a tribe known as the Brigantes.  Unknown to Caracatcus, their Queen Cartimandua was allied with the Romans and willingly handed him over to them in chains as a war prize (the Brigantes later revolted against Cartimandua). For the Britons, the defeat and capture of Caractacus marked the end of a century of leadership under the Catevellaunan nobles. With the capture of Caractacus, much of southern Britain from the Humber to the Severn was pacified and garrisoned throughout the 50s. 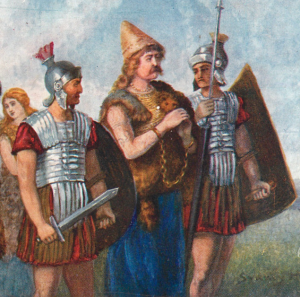 The Annals, by Roman historian Tacticus lays out what happened next. He writes that a parade was organized and the Briton warrior, his wife and children were displayed in the center of Rome to be put to death. “There was curiosity to see the man who for so many years had spurned our power” writes Tacticus. Caractacus had become something of a famous name in Rome and word quickly spread that their troubles in what is now Britain were over, which was not to be the case. At the last minute, the Emperor Claudius decided to allow Caractacus to make a plea for his life. The Roman historian Cassius Dio records that when brought before the senate he was told to give one reason why he shouldn’t be executed. Caractacus responded:

“Had my moderation in prosperity been equal to my noble birth and fortune, I should have entered this city as your friend rather than as your captive; and you would not have disdained to receive, under a treaty of peace, a king descended from illustrious ancestors and ruling many nations. My present lot is as glorious to you as it is degrading to myself. I had men and horses, arms and wealth. What wonder if I parted with them reluctantly? If you Romans choose to lord it over the world, does it follow that the world is to accept slavery? Were I to have been at once delivered up as a prisoner, neither my fall nor your triumph would have become famous. My punishment would be followed by oblivion, whereas, if you save my life, I shall be an everlasting memorial of your clemency.”

It is not known whether the speech was as eloquent as Tacticus portrays it in his writing. Another question that arises from the confrontation is what language Caractacus gave his speech in and whether he knew how to speak Latin. Regardless, the senate was so moved by his passionate words that Emperor Claudius spared him his life, and Caractacus spent the remainder of his time in Rome, presumably as a free man.

There is no account of what happened to him afterwards and no record of him ever returning to his homeland. According to Cassius Dio in Roman History, after his pardon he remarked how such a beautiful city should be in control of his poor land.

“Caractacus, a barbarian chieftain who was captured and brought to Rome and later pardoned by Claudius, wandered about the city after his liberation; and after beholding its splendor and its magnitude he exclaimed: ‘And can you, then, who have got such possessions and so many of them, covet our poor tents?

Classical writers like Cassius Dio and Tacitus have left us with a lasting impression of Caractacus. He was described as brave, obsessively opposed to Rome and boldly articulate in the face of his own death. Caractacus is seen by many as a folk hero and his enduring legacy is that he was one of the most celebrated freedom fighters of his age.