The Footsteps of Owain Glyndwr 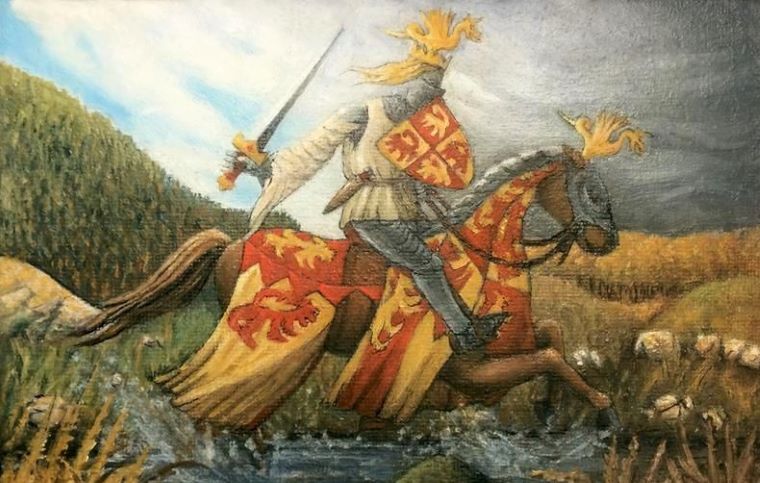 More than six centuries ago, the last native Welshman to claim the title Prince of Wales declared war on England. On 16 September 1400 – a date now commemorated as Owain Glyndwr Day – that near-mythical hero launched a bloody rebellion against the occupying forces of Henry IV. His insurrection came to naught, but his deeds are honoured in monuments, statues, even a university. And a long-distance footpath.

The 135-mile Glyndwr’s Way traces a meandering loop through lovely tracts of mid-Wales, from Knighton to Welshpool. You might assume that walkers follow in his footsteps. I did. And with 2015 marking the 600th anniversary of his death, it seemed an auspicious time to boot up and look for relics of Glyndwr’s legacy on the national trail that bears his name.

Since the trail meets the Offa’s Dyke Path at both ends, it’s possible (and spectacular) to walk a full circuit over a couple of weeks. But it’s also straightforward to do as I did – pack a two-day micro-adventure into a long-ish weekend, using the handy halfway town of Machynlleth as a launch pad to traverse 30-odd miles of the most romantically remote stretches.

The moorland above the tiny hamlet of Dylife (pronounced “Duh-lee-va”), where I’d slept at the lonely Star Inn, is as romantic and remote as you could wish. The morning air was crisp, the sun hazy as I climbed to the trail above, pausing to admire a red kite – the first of a dozen spotted that day – circling above, and drink in the melodious twitter of skylarks amid nearby tussocks. As I joined the waymarked path running along the ridge, a glance around confirmed my suspicions: I wouldn’t be meeting another person anytime soon. 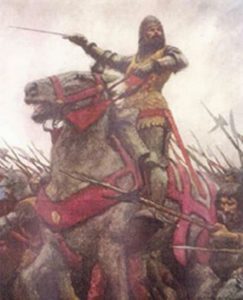 Alive, that is. Reminders of the long-dead appeared after mere steps, at Penycrocben – the “hill of the gallows”. Here, centuries ago, a murderous blacksmith was condemned to forge his own gibbet cage; in 1938 his skull, still locked in that iron cage, was pulled from one of the disused mineshafts that pock the hillside. Here too, my OS map informed me, lies a Roman fortlet. Further south loomed the five peaks of Pumlumon, where Glyndwr won his first great victory at Mynydd Hyddgen in 1401. To reach that battlefield would entail a long detour off the trail, though, so westward I continued.

This high section is one of the most exposed, revealing vistas back to hills topped with wind-farms, left across the precipitous, pine-blanketed slopes of the Clywedog Gorge and ahead to the raw bulk of the area’s tallest peak, Foel Fadian. Passing a solitary cascade and tumbledown pit buildings, I crossed boggy, heather-purpled moor to the lake of Glaslyn, its mirror sheen wrinkled by paddling wildfowl. Just beyond, the world fell away, the path ducking between a vertiginous escarpment and the scree-clad slopes of Foel Fadian, where an emerald patchwork of fields unfurled.

In the space of a few miles that first day the scenery transformed from desolate moor to bucolic meadows. I ambled along paths carving flower-lined holloways and forestry plantations shaded by neat ranks of firs. I enjoyed an impromptu lesson in sheep husbandry from an elderly chap on a quad-bike; “I’m off to check on the ewes who’re carrying twins,” he told me. “But how’d you know?” “Oh, we had them all scanned in January.” So much for supernatural farmers’ instinct. I met no other walkers. Indeed, I’d encountered far more birds than people – kites, larks, a buzzard flapping off on languid wings – which, to my mind, makes for a perfect day.

Machynlleth is a winsome, artsy town with possibly the strongest Glyndwr connection on the trail. In 1404 the Welsh leader convened his first parliament here. Though the current “parliament” building dates from slightly later, it does house a lively exhibition telling his tale. In footling homage I picked up a bottle of Cwrw Glyndwr beer from the adjacent Siop Alys with which to toast his health over dinner.

Next morning the trail led me east across the southern slopes of the Dyfi Valley. The northern skyline is dominated by mountains including Cadair Idris, marking the southern extent of Snowdonia. But the path, though described as “undulating” (there are some breathtaking ascents), is less wild and remote than the previous leg, rarely out of sight of villages. It’s not, though, short of panoramic views – of round-shouldered hillsides splotched with patches of bracken, like a whale’s head encrusted  with barnacles, and finally across the lush vale around Llanbrynmair, from where a bus returns to Machynlleth.

I’d caught only scant glimpses of Glyndwr. Tangible links to his life are sparse on the trail; instead, echoes and whispers speak of his legacy. Perhaps that’s appropriate: though tradition suggests he died in 1415, in truth nobody knows where, when or how he met his end after the rebellion fizzled out. Some say he waits with his army in a cave, Arthur-like, to liberate Wales. Another legend has it that he possessed a magical stone, spat out by a raven, which gave him invisibility. And in the wilder reaches of this land he loved and fought for, it’s not hard to imagine Owain lurking yet, unseen but watching.