The Ghosts of Grosse Île 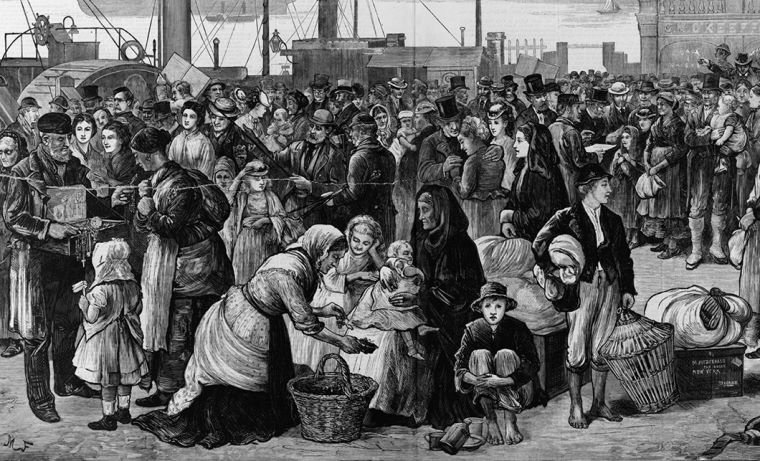 Grosse Île, in the Gulf of Saint Lawrence in Quebec, Canada, acted as a quarantine station for Irish people fleeing the Great Hunger between 1845 and 1849. It is believed that over 3,000 Irish people died on the island and over 5,000 are buried in the cemetery there.

When the authorities in Quebec heard news of ships arriving with sick passengers, they quickly set up Grosse Île as a port of entry and quarantine station at which all ships were required to dock before moving on to the mainland. The island had dealt with epidemics before. In 1830, about 30,000 immigrants arrived in Quebec, and two-thirds were Irish. These huge waves of immigration were concurrent with cholera epidemics in Great Britain and Europe. Areas in the west of Ireland – mostly Mayo, Donegal and Galway – were also experiencing potato crop failure. In fact, the crop failed to various degrees all over the country throughout the 1830s, though no one is sure exactly when the blight that caused the successive crop failures of 1845-49 arrived in Ireland.

In 1847, 100,000 Irish people traveled to Grosse Île to escape starvation, unaware of the hardships they would encounter upon arrival.
The first “Famine ship” arrived on May 17, 1847, the ice still an inch thick on the river. Of that ship’s 241 passengers, 84 were stricken with fever and 9 had died on board. With the hospital only equipped for 150 cases of fever, the situation quickly spun out of control. More and more ships arrived at Grosse Île each day, sometimes lining up for miles down the St. Lawrence River throughout the summer. On these coffin ships – named for their crowded and deadly conditions – the number of passengers stricken by fever increased exponentially.

The Virginius, from Liverpool on May 28, had 476 passengers on board but, by the time she reached Grosse Île, “…106 were ill of fever, including nine of the crew, and the large number of 158 had died on the passage, including the first and second officers and seven of the crew, and the master and the steward dying, the few that were able to come on deck were ghastly yellow looking specters, unshaven and hollow cheeked, and without exception, the worst looking passengers I have ever seen…” wrote Dr. Douglas, Medical Superintendent at Grosse Île, in the 1847 Immigration Report.

The island was ill equipped to say the least. Hastily built, the quarantine hospitals lacked proper sanitation, supplies and space to accommodate all the sick patients. Many of the doctors dispatched to Grosse Île had never even seen the effects of cholera let alone treated it, and all were overworked. Being taken to a quarantine hospital was soon viewed as more of a death sentence than an opportunity to get better. 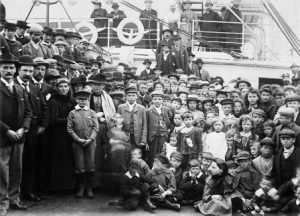 Between 1832 and 1937, Grosse Île’s term of operation, the official register lists 7,480 burials on the island. In 1847 alone, 5,424 burials took place, the majority were Irish immigrants. In that same year, over 5,000 Irish people on ships bound for Canada are listed as having been buried at sea. Today the island is a National Historic Site that serves as a Famine memorial. It was dedicated in 1996 after a four-year-long campaign to protect the mass gravesite. The Grosse Île Celtic Cross, erected by the Ancient Order of Hibernians in 1909, bears an inscription in Irish commemorating the victims of the epidemic and condemning colonial rule. In English, it reads: “Children of the Gael died in their thousands on this island having fled from the laws of foreign tyrants and an artificial famine in the years 1847-48. God’s blessing on them. Let this monument be a token and honor from the Gaels of America. God Save Ireland.” Visitors to the island may also see the lazaretto, the only remaining quarantine hospital from 1847.

Those who survived the trip and could not be accommodated in the Grosse Île hospitals were transferred to Windmill Point, another quarantine area where almost 6,000 Irish people died from typhus. The sick were crammed into poorly built quarantine houses called “fever sheds” where the Grey Nuns of Montreal acted as nurses. Many Grey Nuns also contracted illness themselves.

Meanwhile, the city of Montreal was in a panic over the epidemic. According to John Loye, his grandmother Margaret Dowling witnessed “a young Irish girl, stricken by the disease…dressed in a nightgown and holding a tin cup in her hand.” The girl had wandered into the city of Montreal and was apprehended by a policeman to keep citizens away from her for fear of contamination. “A military cordon had to be established around the area of the sheds to contain the infected immigrants,” Loye said.

When workers began construction of the Victoria Bridge in the area in 1859, they uncovered the remains of immigrants who had died of “ship fever” at Windmill Point. Wishing to commemorate the victims, the workers erected a large boulder from the bed of the St. Lawrence River as a natural tribute to the 6,000 Irish people who died in 1847. Officially the “Irish Commemorative Stone,” most Irish and locals know it simply as “Black Rock.”

Though the death tolls were high at Grosse Île and Windmill Point, large numbers of Irish were able to get through the port, arriving in Toronto during 1847 and 1848. Between May and October of 1847, more than 38,000 Irish people arrived at the Toronto waterfront. The city’s population was only 20,000.

Some of the city’s officials and religious leaders were sympathetic to the Irish people, setting up “emigrant sheds” and offering medical care. Typhus and cholera, however, remained a danger as many invalid Irish had been allowed to leave Grosse Île and enter Toronto due to lack of resources. These “healthy” Irish could barely walk when they arrived, and those who could often developed the fever only weeks later. An entry from Robert Whyte’s 1847 Famine Ship Diary describes starving, homeless Irish families succumbing to the harsh Canadian winter. Just as before, more and more fever sheds were built and ineffectively run, infecting doctors and nurses in the process. By the end of 1847, 1,100 immigrants had died. 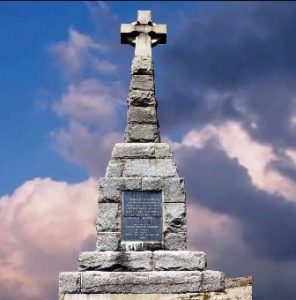 Toronto’s Ireland Park now serves as a memorial site for the Famine Irish. The park features Rowan Gillespie’s “The Arrival” sculptures, a response to his “Departure” figures that stand on the Liffey quayside in Dublin and depict Irish men, women and children waiting to leave Ireland on ships. The Ireland Park figures are just west of Reese’s Wharf where the immigrants landed and south of where the fever sheds were built.

The park also includes a limestone memorial engraved with the names of those Irish immigrants who died in Toronto in 1847. Of the 1,100 victims, 675 names have been recovered so far.

While the number of deaths at sea and burials at Grosse Île are vast, and the young ages of many of the victims are heartbreaking, the presence of marriage and baptism records make tangible the sense of hope that immigrants felt upon their arrival in North America.
Ellen Keane was the first person to die in quarantine on Grosse Île in the summer of 1847. She was four years and three months old. She was brought ashore on May 15 from the ship The Syria and died the same day. Within the week 16 others followed Ellen in death: Nancy Riley, 24, Thomas Coner, 40, Edward Ryley, 30, Ellen Murtilly, 50, Ellen Murtilly, 46, John Colville, 84, James Managin, 55, Patrick Fagan, 13, Patrick Jordan, 8, Mary Mark, 2, Eliza Whalen, 3: Ann Hooper, 10, Thers. Hooper, 5, Thomas Bennet, 4, John Whalen, 4, and Brid. Monaghan, 3.