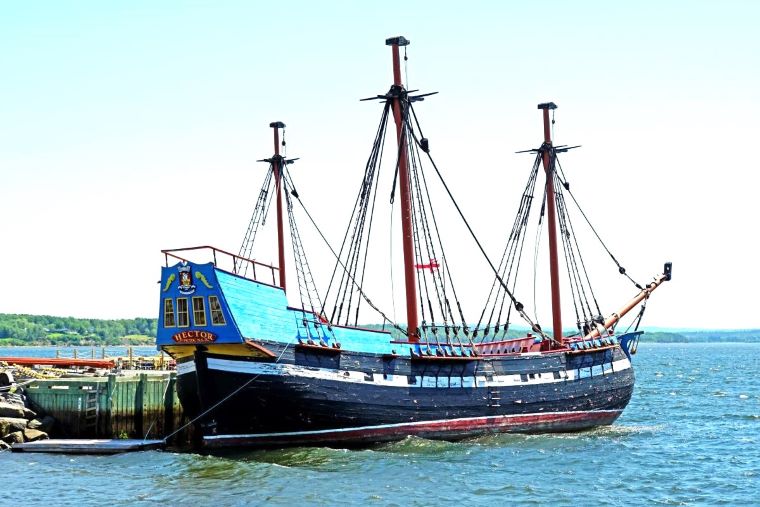 Down on the shores of Pictou Harbour in Nova Scotia ship builders have painstakingly reconstructed the 18th century ship Hector. In 1773 the old Dutch ship landed there with over 170 Scottish Highlanders on board. Today, it is estimated that there are more than 140 000 descendants of the “Hector People” living in Canada and the United States. Anyone who can claim an ancestor who arrived on the Hector is endowed with the same honour as the United Empire Loyalists who immigrated to Canada during the following decade.

Although they were not the first Scots to arrive in North America they were the vanguard of a massive wave of Scottish immigrants to arrive in what is now Canada. In the century following the landing of the Hector more than 120 ships brought nearly 20 000 people from Scotland to the port of Pictou. By 1879 more than ninety-three percent of the region’s rural property owners had Scottish names.

Ironically, very few of the Hector people stayed on the Pictou Plantation. They had been cruelly deceived by the shipping company that brought them out to Nova Scotia. The land was not ready for settlement as promised and supplies for the coming winter were meager. Most of them moved on to settled parts of the province leaving an intrepid handful of their countrymen to fend for themselves in an uncultivated wilderness.

The oldest existing document relating to those firstcomers is a ragged sheet of foolscap that has been carefully preserved by the Public Archives of Nova Scotia at Halifax. It is the list of the names of the people who boarded the ship at Loch Broom and Greenock in the summer of 1773. Many Canadians and American look to this document as the most important source of their family’s roots in the New World.

At first glance the columns of names make little sense. The cramped, careful handwriting is that of an old man writing from memory, seemingly without consideration for any logical classification of the names. The list was compiled by one of the ship’s passengers, William MacKay, many years after the landing of the Hector. He wrote from firsthand knowledge of the families and individuals who survived the cruel voyage and he developed his list according to familial groupings.

How does the family historian know which names belong to their family? A genealogist has to be part historian, part sociologist, and part detective to be able to search out the past from those apparently random columns in Squire MacKay’s list. 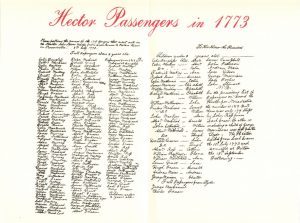 In 1973 the tattered old passenger list had new life breathed into it. It was the 200th anniversary of the Hector’s landing and an appropriate souvenir was needed to commemorate the event. A photocopy of the MacKay document was turned over to Peter Little, a Montreal graphic artist. It was his task to render an exact reproduction of the original list. The process proved to be long and exacting, but the results were surprising.

Mr. Little, a native of Scotland, spent several weeks studying the faded document before attempting to restore the tight script. He practiced MacKay’s handwriting for many hours before putting his pen to the photocopy. At first the procedure was slow. With the aid of a magnifying glass Little carefully traced over the words with pen and India ink. As his task progressed he picked up the flow of MacKay’s hand and was able to complete the job within three weeks. It was during this period that several clues to the riddle were revealed.

Some of the precious names had been all but obliterated through years of handling and carelessness, but Mr. Little was able to follow the natural flow of MacKay’s writing and reconstruct the faded letters with no difficulty. In one case, nothing more than a few twisted lines were all that remained of a long-forgotten name. Someone once saw the name Janate in those scratches but Little discovered that he could not write “Janate” because MacKay’s handwriting did not fit the loop and stroke fragments that were still visible. Instinctively he wrote “Donald” to bring the loops and strokes together perfectly. A small piece of the puzzle had fallen into place.

There are other clues to help unlock the secrets of the list. Firstly, the names are presented in four main categories: 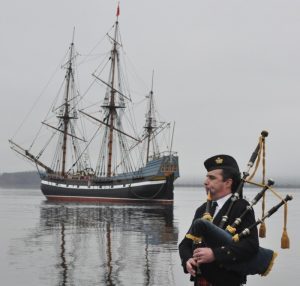 PUTTING THE PIECES TOGETHER

On July 23, 1973, thousands of Scottish-Canadians and Scottish-Americans gathered at Pictou to celebrate their common ancestry. Anchored in the harbour was the schooner Bluenose II standing in for the Hector. The guests of honour included Justice William O. Douglas of the United States Supreme Court who was present to pay homage to his ancestor Colin Douglas. Throughout the day hundreds of copies of the refurbished passenger list were distributed by high school students. William MacKay’s document had been transformed into an elegant souvenir of the event. For the first time the actual list of Hector passengers was available to the general public and family historians. Genealogists would have no problem finding familiar names in the crisp, new reproduction.

To put the pieces of the puzzle together one has to start with the names of the children under 2-year-old. Each child carries the name of their father. There are 27 infants listed and next to them there are 22 fathers listed. The fathers’ names also appear in the first column Full passengers above 8 years old. Married women were listed by their maiden name and were listed below their husband’s name. Helen Fraser was the wife of Colin MacKay; Jane Forbes was the wife of George Morrison; and so on.

The father of one infant “John” was William Mathewson. In the column Full passengers above 8 years old William Mathewson appears again with the name Elspa MacKenzie, his wife, directly below. Finally, in the column Passengers from 2 to 8 years old is the name Ann Mathewson. The members of this family are the parents William and Elspa and their children John and Ann. With patience and persistence one can find dozens of families using this technique.

The riddle of the list may never be fully solved. It is known that there were 189 people on board the Hector when it sailed from the Clyde, but it is not known for certain how the passengers were related to one another or which ones did not survive the horrendous nine-week voyage. Smallpox and dysentery took their toll on the infants and children on board. In all, eighteen died at sea. By the time the rotting hulk landed, people were picking at the planks to find worms to eat. To find one’s ancestors in the list of passengers, the family historian must put all their skills to the test.