The History of Irish Dance 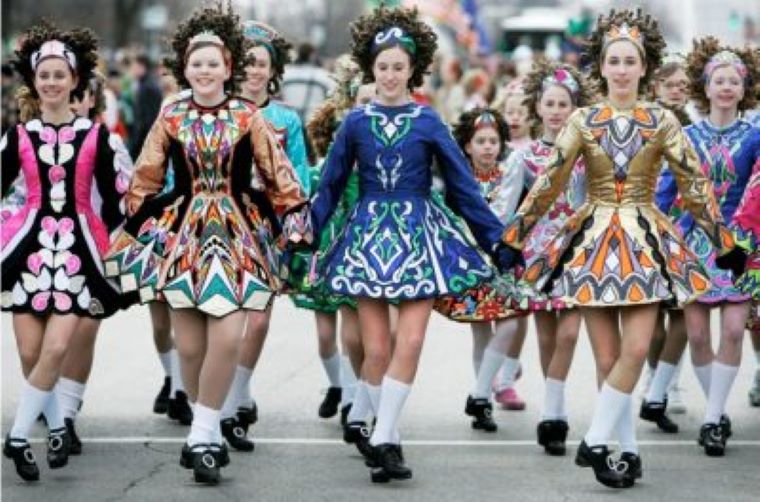 When the Celts arrived in Ireland over two thousand years ago, they brought with them their own unique style of folk dancing.

The early history of Irish dance reveals a constant shifting of population through migration and invasions. Each of these peoples brought their preferred types of dance and music. There are only vague references to the early history of Irish dancing, but there is evidence that among its first practitioners were the Druids, who danced in religious rituals honouring the oak tree and the sun. Traces of their circular dances survive in the ring dances of today. When the Celts arrived in Ireland from central Europe over two thousand years ago, they brought with them their own folk dances. Around 400 AD, after the conversion to Christianity, the new priests used the pagan style of ornamentation in illuminating their manuscripts, while the peasants retained the same qualities in their music and dancing.

The Anglo-Norman conquest in the twelfth century brought Norman customs and culture to Ireland. The Carol was a popular Norman dance in which the leader sang and was surrounded by a circle of dancers who replied with the same song. This Norman dance was performed in conquered Irish towns.

Three principal Irish dances are mentioned often in sixteenth century writing: the Irish Hey, the Rinnce Fada (long dance) and the Trenchmore. One of the first references to dance is in a letter written by Sir Henry Sydney to Queen Elizabeth I in 1569. “They are very beautiful, magnificently dressed and first class dancers,” Sydney wrote of the girls he saw dancing enthusiastic Irish jigs in Galway. 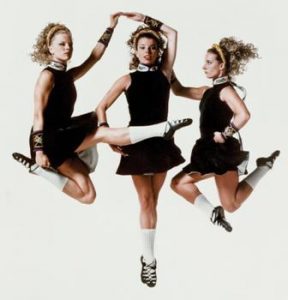 Sydney went on to describe the dance formation, observing the dancers in two straight lines which suggests they were performing an early version of the long dance.

During the mid sixteenth century, dances were performed in the great halls of the newly built castles. Some of the dances were adapted by the sixteenth century English invaders and brought to the court of Queen Elizabeth. One of these dances was the Trenchmore, which was an adaptation of an old Irish peasant dance. From this period onward another style of dance called the Hey was popular where female dancers wound in around their partners, in a fore-runner of the present day reel.

When royalty arrived in Ireland, they were greeted at the shore by young women performing native dances. When King James landed at Kinsale, County Cork, in 1780, he was welcomed by dancers. Three people stood abreast, each holding ends of a white handkerchief. They advanced to slow music and were followed by dancing couples, each couple holding a handkerchief between them. The tempo of the music increased and the dancers performed a variety of lively figures.

Irish dancing was accompanied by music played on the bagpipes and the harp. In the houses of the Anglo-Irish aristocracy, the master often joined with servants in some of the dances. Dancing was also performed during wakes. The mourners followed each other in a ring around the coffin to bagpipe music.

During the eighteenth century, the dancing master appeared in Ireland. He was a wandering dancing teacher who travelled from village to village in a district, teaching dance to peasants. Dancing masters were flamboyant characters who wore bright clothes and carried staffs. Their young pupils did not know the difference between their left and right feet. To overcome this problem, the dancing master would tie straw or hay to his pupils’ left or right feet and instruct them to “lift hay foot” or “lift straw foot”.

Group dances were developed by the masters to hold the interest of their less gifted pupils and to give them the chance to enjoy dancing. The standard of these dances was very high. Solo dancers were held in high esteem and often doors were taken off hinges and placed on the ground for the soloists to dance on.

Each dancing master had his own district and never encroached on another master’s territory. It was not unknown for a dancing master to be kidnapped by the residents of a neighbouring parish. When dancing masters met at fairs, they challenged each other to a public dancing contest that only ended when one of them dropped with fatigue.

Several versions of the same dance were to be found in different parts of Ireland. In this way a rich heritage of Irish dances was assembled and modified over the centuries. Today, jigs, reels, hornpipes, sets, half sets, polkas and step dances are all performed. Solo dancing or step dancing first appeared at the end of the eighteenth century.

The costumes worn by Irish dancers today commemorate the clothing of the past. Each school of dancing has its own distinct dancing costume. Dresses are based on the Irish peasant dress worn two hundred years ago. Most of the dresses are adorned with hand-embroidered Celtic designs, copies of the Tara brooch are often worn on the shoulder. 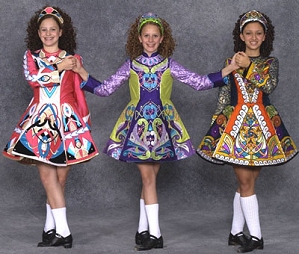 The brooch holds a cape which falls over the back. The clothes worn by men are less embellished but steeped in history- they wear a plain kilt and jacket, with a folded cloak draped from the shoulder. Male and female dancers today wear hornpipe shoes, and for reels and jigs, soft shoes similar to ballet pumps are worn.

Today there are many organizations promoting Irish dance. The Feis has been an important part of rural cultural life. Children, teenagers and adults compete in separate competitions for Feis titles and prizes. There are group and solo competitions where dancers are graded by age from six to seventeen and then into the senior categories.

There are dancing championships in all four provinces, and winners of these provincial competitions qualify for the All Ireland Championships. The World Championships are held in Dublin at Easter where dancers from England, Ireland, USA, Canada, Australia and New Zealand compete for the World title.

The Irish word céili originally referred to a gathering of neighbours in a house to have an enjoyable time, dancing, playing music and storytelling. Today it refers to an informal evening of dancing. Céilis are held in large towns and country districts where young and old enjoy together group dances. The céili can be traced back to pre-famine times, when dancing at the cross-roads was a popular rural pastime. These dances were usually held on Sunday evenings in summer when young people would gather at the cross-roads. The music was often performed by a fiddler seated on a three legged stool with his upturned hat beside him for a collection. The fiddler began with a reel such as the lively “Silver Tip”, but he had to play it several times before the dancers joined in. The young men were reluctant to begin the dance but after some encouragement from the fiddler, the sets of eight filled up the dancing area.

The world-wide success of Riverdance and more recently Lord of the Dance has placed Irish dance on the international stage. Dancing schools in Ireland today are filled with young pupils keen to imitate and learn the dancing styles which brought Jean Butler and Michael Flatley international acclaim.

Today there are many opportunities to watch and enjoy Irish dancing. It is still a regular part of social functions. Dancing sessions at céilis are usually preceded by a teaching period where novices are shown the initial steps. During the summer months, céilis are held in many Irish towns. Visitors are always welcome to join in and with on the spot, informal instruction, anyone can quickly master the first steps and soon share the Irish enthusiasm for Irish dance.