The History of Scottish Cuisine 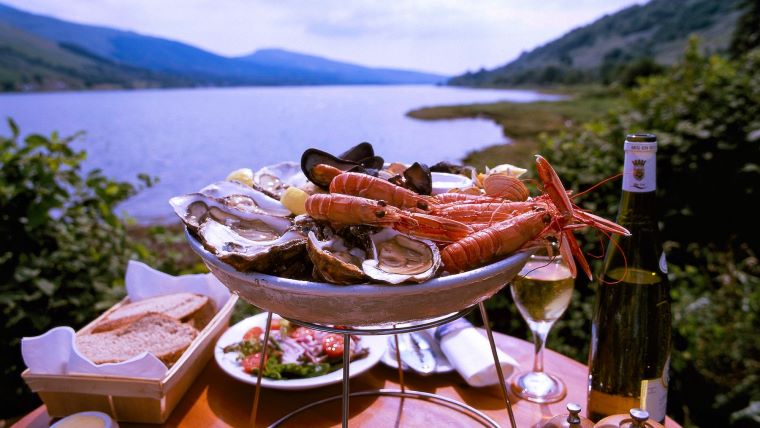 Thanks to its varied geography and hundreds of miles of coastline, Scotland produces some of the finest venison, beef, lamb, salmon, langoustine and other sea-foods available. During its long history, Scotland’s food has been influenced by internal factors such as policies on land ownership or famine and by external influences such as close contact with other cultures. There is good historical evidence for the eating habits of Scotland’s people, rich and poor, and thanks to excavations carried out by archaeologists from throughout the world, we even have a clear picture of the food choices of the people who inhabited the land several thousand years ago.

As the ice age receded, the first hunter-gatherers came to Scotland. They hunted deer from the land and seals from the sea. They also used various indigenous plants to supplement their diets. Around 2000 years after the first inhabitants of Scotland arrived, farming was established and the people began to raise sheep and cattle and to grow wheat and barley. Archaeological evidence from neolithic middens (rubbish heaps) shows that the people also ate fruits and nuts and along the coast line there are shell middens which provide proof that they also enjoyed scallops and other shellfish.

At the time of the Picts, the upper classes enjoyed hunting during the day and feasting by night. This typically consisted of an array of meats including wild boar and venison. Vegetables eaten around this time include kale, cabbage, beans, turnips, carrots and plants such as wild garlic were frequently used to add flavor. Although relatively little is known for certain about the Picts, it is considered likely that the poorer people ate meat from domesticated animals such as cows and used milk in their diets. During the late ninth century, the Kingdom of Scotland was formed as the Pictland merged with the Gaelic kingdom of Dal Riata. Recent incursions by Scandinavians had seen the establishment of Viking settlements and it is believed that the Norsemen introduced the Aberdeen Angus variety of cattle with them. The Vikings also introduced the idea of smoking food and this is still commonly done in Scotland where one of the most popular traditional foods is Arbroath Smokies (smoked haddock). 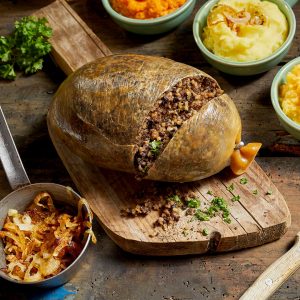 Ordinary folk in medieval Scotland did not enjoy a great deal of variety in their diets. Common foods included oat breads, porridge, stews and thick soups called pottage. Those who lived close to the sea also had fish in their diets. Honey was used to sweeten food and some people kept cows for milk and chickens for eggs. Vegetables such as kale, beans, peas and onions were commonly used. Nuts, fruit and berries gathered from the woods supplemented the diet of poor people but a poor harvest or bad winter often meant starvation. By contrast, wealthy Scots enjoyed a rich and varied diet. The landowning classes were able to enjoy the game which they hunted on their estates and only the wealthy were allowed to enjoy the fish caught in their rivers. A medieval banquet might include wild boar, venison, rabbit, grouse and other game birds, fish and foods which are no longer eaten today such as peacock and swan. They also enjoyed an array of fruits which were often made into fritters. At this time, pepper and spices which had first been brought to the country by returning Crusaders were available to the wealthy and salt was seen as a status symbol as it was so expensive to buy. Throughout the medieval period, trade between Scotland and other European countries, particularly France flourished and this had an influence on the types of food eaten. Records of a banquet held at the court of King James IV show the extent of feasting with dozens of deer, boar, piglets and other delicacies on the menu alongside Florentine pie which was made from oysters, rabbit and other meats encased in pastry. It was during the late medieval period that records of Scotland’s national dish,haggis are found for the first time. It is thought to have originated out of necessity as people were mobile and needed to carry food with them. Just as people carried oatmeal with them to make porridge or oatcakes they began to carry a small amount of offal with them in a bag made out of a sheep’s stomach. It is possible that this practice originated in Scandinavia and was brought to Scotland by the Vikings.

The Advent of the Potato

The potato first arrived in Scotland in the late sixteenth century and quickly became a staple in the diet of its people. The reliance on the potato as a source of food amongst the lower classes of Scotland ultimately led to tragedy. The Highland Potato Famine in the 1840s was caused by a Europe-wide potato blight. As a result of starvation, many died while 1.7 millions Scots were compelled to leave their homeland to seek a better life in the USA, Canada or Australia. Some landowners forced their tenants onto ships and transported them to Canada where they had to start over. By 1857, the famine was over and crops of potatoes became abundant again. They have formed an important part of the Scottish diet ever since and can be found in traditional dishes such as haggis, neeps and tatties, steak pie and mash, mince and tatties, potato scones and Cullen Skink (a smoked haddock soup). The consequences of the potato famine highlight the effect that food can have on a country’s history. Although there were other socio-economic factors involved in the depletion of the Scottish population during the 18th and 19th centuries, the potato famine played a large part.

Thanks to the Scottish pioneers of the deep-fried Mars Bar, there is a perception that all that is eaten in Scotland is fried food. Whilst it is true that Scotland has numerous fish and chip shops, many of which were started by Italian families who came to the country during the 20th century, modern Scottish cuisine has much more to offer. There are many fine restaurants which make use of local produce to create Michelin worthy dishes. International cuisines, particularly Chinese and Indian are also extremely popular in Scotland. Many traditional foods are still enjoyed by Scots. On 25th January each year, Scotland commemorates its greatest poet, Robert Burns in a celebration where haggis is served. Other occasions when traditional foods such as haggis, venison pie or stovies are made by many households are for St Andrew’s Day (30th November) and for New Year. Scots have long had a sweet tooth and traditional desserts include burnt cream, clootie dumpling, marmalade pudding and raspberry cranachan, which is made using cream, honey, oatmeal and fresh raspberries.