The History of the Saltire 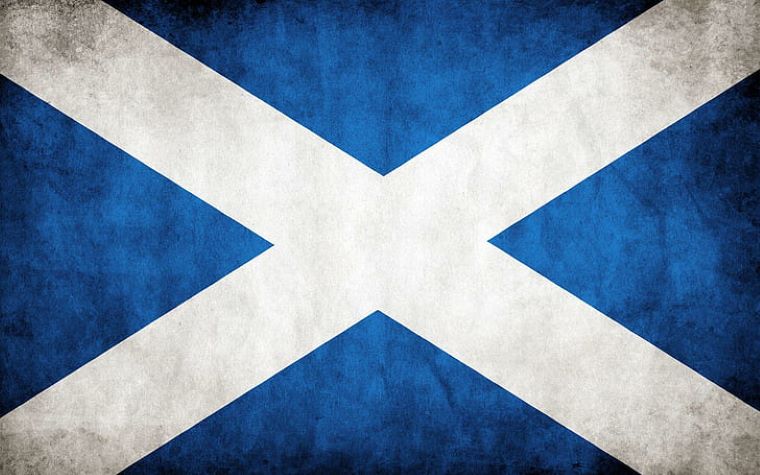 Tradition has it that Scotland’s flag originated in a battle fought in East Lothian in the Dark Ages.

In the year 832AD, an army of Picts under Angus mac Fergus, High King of Alba, and aided by a contingent of Scots led by Eochaidh, King of Dalriada, had been on a punitive raid into Northumbrian territory and were being pursued by a large force of Angles and Saxons under one Athelstan. The Scots/Picts were caught by their pursuers near the present day village of Athelstaneford in East Lothian.

Fearing the outcome, King Angus led prayers for deliverance, and was rewarded by the dramatic appearance above the fighting of a white saltire, the diagonal cross on which St Andrew had been martyred, against a blue sky. The king vowed that if, with the saint’s help, he gained the victory, then Andrew would thereafter be the patron saint of Scotland. The Scots/Picts did win, and in due course the St Andrew’s Cross would become the flag of Scotland.

St Andrew was probably the patron of Scotland by the year 1000. In 1286, the Seal of the Guardians of Scotland already bears, on the obverse, a representation of St Andrew on his X-shaped cross, with the Latin inscription “ANDREA SCOTIS DUX ESTO COMPATRIOTIS” (St Andrew be leader of the compatriot Scots). In 1390, St Andrew was used as a national symbol on a coin of the realm, the five-shilling piece minted in the reign of Robert III.

In 1385, as the Scots made preparations to invade England, the Scots Parliament decreed that “every man shall have a sign before and behind, namely a white St Andrew’s Cross, and if his coat is white he shall bear the same white cross on a piece of black cloth”. Note that blue as a background had not yet been developed. The crosses of St Andrew and St George are so strikingly dissimilar as to be easily recognisable in the heat of battle, and their importance in medieval warfare is therefore understandable.

There are other references in the 14th century to saltires with fields which were not blue. The Douglas Standard, said to have been carried at the Battle of Otterburn in 1388, included a saltire on a sage green background.

About 1460, a white saltire on a blue background appears as part of a more complex design on the “Blue Blanket” standard, said to have been given to the incorporated trades of Edinburgh by James III. 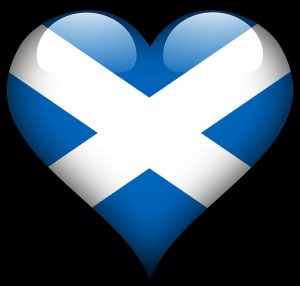 By the start of the 16th century, the plain white saltire on a blue field had become established. For instance, in 1511, the Great Michael, the largest warship of its day, was built for King James IV and carried the head.

In 1606 James VI and I established the first Union Flag combining the flags of St Andrew and St George. The St Andrew’s Cross was allowed to continue as Scotland’s national flag, and the Union Flag was restricted to royal ships by Charles I in 1634.

Numerous 17th century examples are found of ships flying the saltire: it became a true national flag at sea. When in 1672 the Public Register of Arms was set up, the St Andrew’s Cross was recorded as the badge of Scotland, and many seaport arms show ships flying it.
The St Andrew’s Cross was also commonly the basis of the colours of Scottish Regiments in the Civil Wars, and later of those of the Covenanters.

In 1672, by Act of Parliament, the legal jurisdiction over the display of flags in Scotland came within the sole discretion of a Scottish authority – the Lord Lyon King of Arms. He remains to this day supreme in heraldic matters throughout Scotland.

One of the consequences of 1707 was the introduction of the Union Flag as the flag of Great Britain. Queen Anne duly saw fit to make the Scottish flag the ground of the new one, placing thereon that of St George, and this continued to be the Union Flag until 1801 when the so-called cross of St Patrick (really the red saltire of the Fitzgerald arms) was added.

After the Act of Union, the use of the St Andrew’s Cross declined. A yellow or gold saltire on a blue field was used, however, during the Jacobite risings of 1715 and 1745.

In the latter half of the 20th century, there was a major resurgence in the use of the St Andrew’s Cross, and it has regained its status as the legally established national flag of Scotland. It is used by all Scottish teams in international competitions. It is now widely flown on the flagstaffs of public buildings, sometimes alone and sometimes side by side with the Union Flag. The saltire is also used by many bodies, both private and public, as a logo, a purpose for which it is well suited.