The Islands of Lough Erne 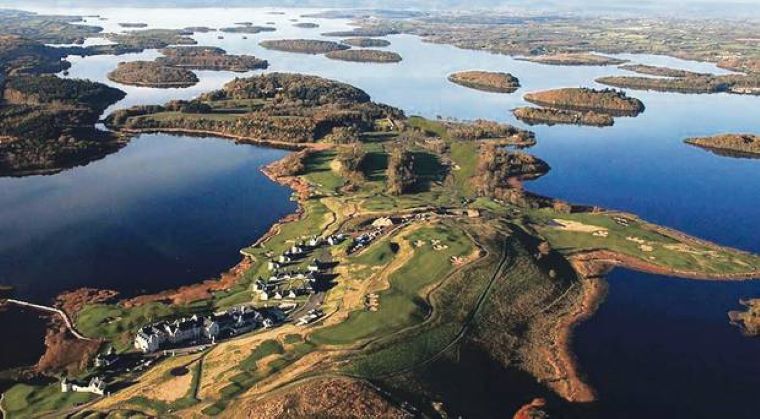 For thousands of years the Erne was a major waterway, providing a route from the Atlantic Ocean to inland Ireland, a border between the ancient Kingdoms of Connaught and Ulster, and a gateway to the pilgrimage site of Lough Derg.

Its waters brought the first Neolithic people to settle on its banks, carried Christian missionaries to its shores to preach Gospels, and later Viking invaders to raid and plunder.

A series of lake systems studded with islands, the Erne was named for the Ernai, an ancient tribe who were defeated in battle and submerged by its waters. Rising in County Longford, it flows through Counties Cavan and Fermanagh before meeting the Atlantic in County Donegal.

Along its course are over a hundred islands, each with a story to tell. 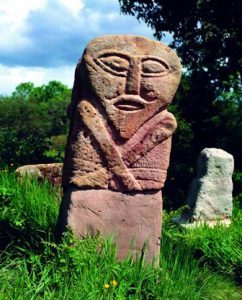 Four miles long and a mile wide, Boa Island (named after the Celtic war goddess, Badhbha) is connected to the town of Fermanagh by two causeways. The earthworks of ancient raths – circular farmsteads built by the earliest inhabitants of the island – rise in its fields.

On the island’s southern shore is an incomplete stone circle, ritually significant during the Bronze Age. Here also is Caldragh, an unconsecrated graveyard, home to two mysterious and enigmatic figures – the Boa Island Statue and the Lustymore figure.

The Statue depicts two figures, back to back, and many claim to have experienced an eerie, tingling sensation from touching them. A source of mystery to scholars and historians, it is unclear what the figures are meant to represent. Some suggest that they portray the ancient gods of Boa Island, male and female, carved to ensure the fertility of crops, animals and people, and guarantee the success of the tribe in battle. Others muse that the figures were carved in the early Christian period to represent holy men or local saints.

The Lustymore figure was moved to Caldragh from a nearby island in the early twentieth century and now sits alongside the Boa Island statue. Originally two-sided, one side has long since been defaced. Its remaining face depicts a crouching figure which appears to be holding something and its stance suggests it could well be an early Sheela na Gig – a pre-Christian fertility figure. Perhaps it was carved to represent Badbha herself.

Another Sheela-na-gig is to be found a few miles south of Boa, on White Island. The carving stands alongside seven other statues, part of one of the first Christian Churches built here. Who created them, and why, is not known.

A figure holding two griffins is said to represent the dual nature of Christ, while a partner stone depicting a man armed with a sword and shield is thought to portray Christ the warrior. One of the curious stones depicts a man holding a book, perhaps signifying an evangelist who spread the Gospel. And another figure is seen holding a bag at his waist, possibly representing the biblical David, the underdog who against all odds defeated a giant with the five stones he carried in a pouch. 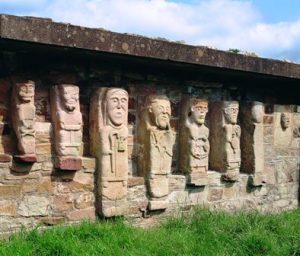 One of the most intriguing figures carries a bell and crozier, suggesting an abbot or bishop. However, this figure wears a hood and appears female. Perhaps it portrays one of the local saints, Febor, who established a religious community in Fermanagh. It might also be Fanchea, a chieftain’s daughter who was one of the first Christian converts.

The final figure is incomplete and shows only the faint outline of a face which failed to emerge from the stone, it’s creation possibly interrupted by a Viking raid, one of many which took place on Lough Erne in the first millennium.

Of all the islands in Lough Erne, Devenish is the most significant. Here the remains of one of the earliest Christian communities in Ireland stand in emerald meadows that slope down into the opal waters of the Erne.

Legend tells that St Molaise came here in the sixth century to spread the word of Christianity. This angered the druids, who urged King Conall Derg to banish Molaise and his monks. The King gathered his warriors and they rode out on horseback to confront Molaise. As the war band approached him, Molaise raised his arms and the King and his warriors were rooted to the spot, unable to advance or retreat.

“What is it you want?” asked the king.

“The right to remain here and worship.” Molaise replied.

The king agreed to the Saints demand, he and his warriors were released, and Molaise and his monks remained on the island. Under Molaise’s guidance the island community flourished, providing a refuge for the sick and the weak, a place of learning where sacred manuscripts were transcribed, and a site of worship where Christians gathered to praise God.

Molaise was renowned for his wisdom and often negotiated treaties between the warring tribes of the Erne, with Devenish becoming known as the Isle of the Assemblies. After his death, Devenish continued to thrive and was described by the poet Cuimin in 650 as ‘a place of hospitality for everyone in Ireland’. 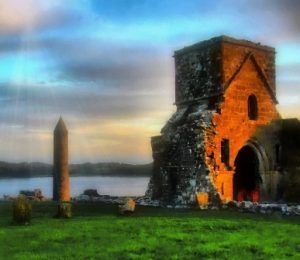 The Annals of Ulster record that in 836 “all the churches of Loch Erne, together with Clones and Devenish, were destroyed by the gentiles.”

The ruins that remain on the Island are thought to date from the medieval period and after. These include St Molaise’s House, a small oratory which would have been the first Christian Church on the island, and Tempeall Mor (‘Great Church’). Within its ruined walls is St Molaise’s coffin, a stone box thought to have been the final resting place of Devenish’s founder, and said to grant wishes to those able to turn around in it. Also there is the mausoleum of the Maguires, one of Fermanagh’s pre-eminent tribes.

The Round Tower of Devenish, standing over eighty feet high, is one of the finest in Ireland. Built as a bell tower to call the faithful to prayer, it also served as a lookout in times of war and a place of safety for the monks and their treasures. Made of local sandstone, four windows look out from the top of the tower, with faces – possibly representing biblical figures or early saints – carved above each one.

Further up the hill, in the graveyard of St Mary’s Priory, stands a High Cross. Carved along its sides are scenes from the Crucifixion, vines, grapes and intricate rope work. It may have been intended as a spiritual defence against invaders, or to draw the attention of pilgrims en route to Lough Derg.

A Latin inscription on a wall of the Priory tells us that “Matthew O’Doogan made this for Bartholomew O’Flanagan, Prior of Devenish, 1449.” Its ruined grandeur still has the power to invoke awe centuries later. Romanesque archways, the spiral staircase leading up to the choir whose walls once resounded to Matins, Evensong and Benediction, the rectangular courtyard where the community of monks went about their daily lives – all conspire to prompt the visitor to reflect on its former glory and the men and women who worked and worshipped here in times gone by.