The Pipes of Christmas 2022 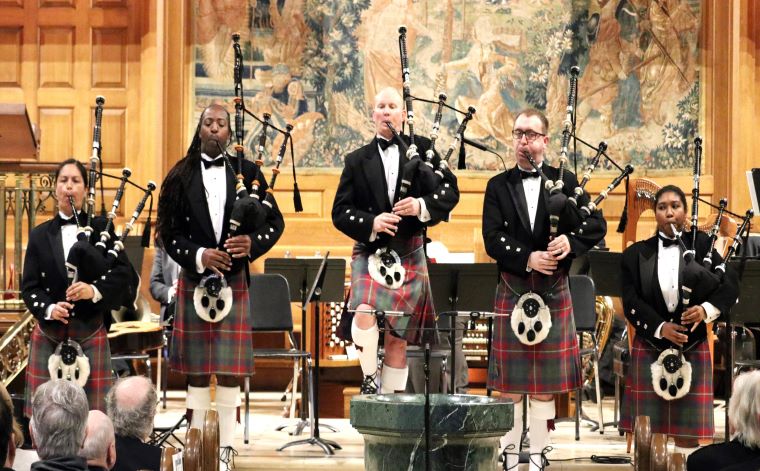 After two challenging years, New York City’s best and brightest Celtic Christmas celebration returns to the spotlight this Holiday Season. Recently we reconnected with the event’s founder Bob Currie about the 2022 event.

How does it feel to have the event return to a live setting?
It feels wonderful to be back at full speed! When the pandemic hit, we had no idea how long it would last. We sadly witnessed the cancellation of virtually all beloved Diaspora events around the world. Unacceptable. We also knew that the performing arts were being hit terribly hard and as a member of that community, we wanted to find a way to help out. After so many successful years of live performances, the notion of letting the pandemic beat us just wasn’t in our DNA. We also knew that we did not want to simply cancel the concert, so we set out to sustain momentum through a virtual concert filmed mostly in Scotland. After sorting out our 2020 virtual production, we carefully and responsibly returned to a live show last year. First, we closely followed the actions of the League of Broadway producers and how they managed the crisis. I was very impressed. So we reduced the number of performances and reduced the seating capacity at each venue to allow for social distancing. We also employed a system of “Covid Concierges” who checked each audience member for vaccination cards and ensured that everyone was masked. Finally, our company was masked during the performance whenever possible. It was all very challenging, but we pulled it off. Perhaps most important, our loyal audience members – who DID come – were grateful to see us back.

What was the online experience like for you?
With the global pandemic literally shutting down theaters and performing spaces, we could have easily just cancelled, and everyone would have been fine, except us. We decided to go virtual. Honestly, it would have been terribly easy to simply re-stream the previous year’s concert, or edit a compilation from past performances, but it just didn’t sit right with me. Nor would it help the artists who were so financially strapped. So, after many phone calls and emails, we hired some of our favorite and finest musicians, singers, and videographers to shoot a series of music videos in stunning Scottish locations, all in 5K resolution. It was essentially a Scottish Christmas travelogue. Our fine friends at VisitScotland provided additional HD B-roll to enhance the productions. Simply lovely. We filmed at incredible destinations, including Glasgow, the Isle of South Uist, Dornoch and the Isle of Skye. We employed multiple production teams that not only captured great performances, but also magnificent drone work to capture the scenery. For me personally, my major challenge was conveying the look and feel I desired. As an experienced filmmaker during my professional career, I was always accustomed to being “on location” to work with the production team to capture my vision. This time around, I had to carefully convey in advance what I was looking for in each video. These teams did not disappoint. The videos are beautiful and right on the mark. The program was very well received and was even a finalist in the 2021 MG Alba Trad Awards for production excellence. 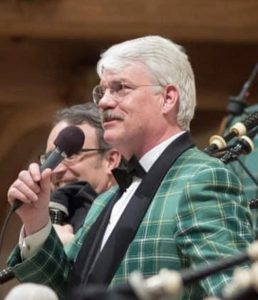 You’ve enjoyed strong public support for this year’s gathering – how did that all come together?
After something of a hiatus from creating full-scale live productions, we were chomping at the bit to get back into high gear. Pre-production work for 2022 started in January. My first order of business was to re-secure the booking of Irish soprano Sharon Lyons. Prior to the pandemic, I had “discovered” her incredible EP, “Simply Christmas” – I was hooked. We instantly contacted her to join us. The problem being that the pandemic had made her appearances impossible over these last two years. I was not about to let that happen again. So, with Sharon on board, we set out to chart the musical selections with music director Steve Gibb. I began to experience the emotional “rush” of producing a full-out live production again. By August, we started receiving ticket inquiries. The Christmas magic was back. I also helped assemble a crack media marketing team from Canada that brought renewed energy, brilliant ideas and outstanding creativity to the show. Between Facebook, Twitter and Instagram, our social media following is at an all-time high. We also established and are still running a GoFundMe campaign to help make up for the financial losses we experienced under Covid. The response has been humbling. Proceeds from the concert not only cover production expenses, but fund all our scholarships, special events and sponsorships for the coming year. As a purely non-profit, volunteer-driven organization, these funds are critical to our mission of preserving and promoting Celtic heritage and culture. Ticket sales have outpaced previous years at this time, and we will likely be declaring some Sold Out notices soon.

What can audiences expect at this year’s shows?
Super excited to be back. In addition to Ms. Lyons’ debut, we will be bringing back many of our regular favorites. This is not merely a “company,” its a family gathering of sorts for both performers and audiences alike. We have some wonderful new material planned and will be dedicating the concert to the memory of HM Queen Elizabeth II. We will also be premiering the third in a series of Royal-inspired works commissioned especially for the concert. We’re delighted to be welcoming back our Narrator, the Rev. Dr. Susan Currie and our Readers, Andrew Weir and James Robinson. Both gentlemen performed together in the 1995 film, “Braveheart,” as young Hamish Campbell and young William Wallace respectively. Weir has transitioned from acting into a successful career in the scotch whisky trade and a leading interpreter of Robert Burns. Robinson has continued in film and television having appeared in “Outlander” and stars in the newly released film, “Saving Christmas Spirit.”

Why is it an important event for the Celtic Community?
Well to start with, this concert brings together some of the finest Scottish and Irish performers. The program offers such a wide assortment of traditional instruments and readings that those in the know will appreciate and enjoy but we also get to introduce a new audience who may never have experienced this music before. Additionally, we will be performing in Scots Gaelic and Irish. It is not often these languages are heard in such a setting, rather they sometimes are sadly delegated to language-specific events before a limited audience. The concert’s impact goes way beyond the “live” experience by bringing educational and cultural heritage scholarships to deserving students, sponsoring major Celtic events like “Tartan Day on Ellis Island,” the Royal National Mod and the US National Celtic Harp Championship. Our organization maintains a year-long schedule of events and programming. Honestly, our impact goes way beyond the Celtic community alone. Our audiences come from all walks of life and backgrounds. In a world where the secular has taken over the sacred, the Pipes of Christmas is about just that – Christmas. Sure, we love Santa and Frosty and Rudolph, but you can find that just about anywhere these days. We choose to focus on the spiritual emotions of the holiday. Given that this is our 24th year, our audiences seem to be glad we remain focused and watchful.

What has the response been like so far?
Most encouraging! Ticket sales are booming, and our other fundraising programs are flourishing. At the end of the day, it tells us we are offering an event that is valued and cherished across the Celtic community. Its quite humbling to know what a holiday tradition we’ve created. This promises to be our best production yet! 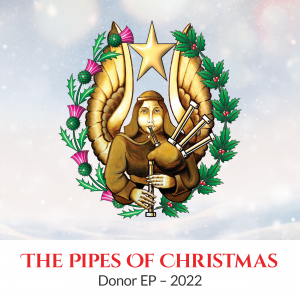 What inspired the new EP, and how did you choose the material?
We maintain a vast library of live recordings and this collection keeps growing with every subsequent year. Having produced two highly successful compilation CDs (“The Best of the Pipes of Christmas” Vols 1 and 2,) we wanted to become more familiar with the digital download experience. We chose a seven-track selection of some of our more recent performances, including several from our 2020 virtual production and remixed and remastered a very nice collection of tunes. We decided to make this EP available exclusively to our GoFundMe donors as a premium for gifts of $100 or more. The response has been great, and we have created a unique way of recognizing our supporters. Great success!

What are your plans for the event in 2023 and beyond?
Just wait! We will be marking a quarter century of performances next year and we plan to pull out all the stops. Just now, we’re staying focused on this December.

The Pipes of Christmas tickets are available via www.pipesofchristmas.com