The Pipes of Christmas 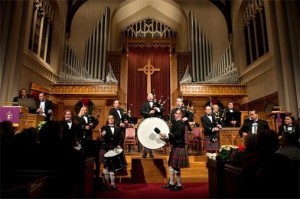 From the bold sounds of the bagpipes and the harmonious blending of brass, strings and percussion, to the poetic and lyrical words that complement them, the Pipes of Christmas has become an annual holiday tradition in New York and New Jersey. Bob Currie, President of Clan Currie and co-producer of the annual event, fills us in on this weekend’s seasonal festival of sound.

When did the Pipes of Christmas event begin?
The first Pipes of Christmas concert was held in 1999. We had no idea how it would be received. With an advance sale of only 200 tickets we were preparing ourselves to be very much “in the red.” To our great surprise, an additional 500 people –yes 500 – showed up at the door. We’ve never looked back.

What is the event’s core mandate?
To entertain and inspire, to showcase brilliant musicians, present inspiring poetry from the British Isles and to celebrate the coming of Christ during Advent.

How has it grown over the years?
We’ve grown in many ways. First off, we enlarged our company and extended our performance runs. We used the proceeds from ticket sales and our very generous sponsors to fund an outstanding scholarship program for young people. We actively seek out and share long forgotten Christmas carols and poems. We’ve made a commitment to perform portions of the program in Scots Gaelic. We took the concert to New York City from our home base in New Jersey seven years ago to see if we had what it takes to be a viable cultural event in the Big Apple. We now sell out our concerts in both states. Most recently, we began to commission new music from Scottish composers. This has been a richly rewarding experience.

Who attends the Pipes of Christmas?
Like other Clan events, the concert is open to the general public. People from all races and religions come to the Pipes each year. We’ve had Scottish diplomats, film and television stars, fashion designers and ex-pats alike come to see us.

What can they expect to experience this year?
For 2012, I’m thrilled that we will be hosting the NYC debut of Gaelic Mod champion singer, Paul McCallum from South Uist. I had the great pleasure of hearing Paul sing at our Clan ceilidh in the Uists last August and signed him on the spot. We have also commissioned two new works by Scottish composers which will have their World Premiere at the 2012 concerts. “Balmoral Snow,” by Steve Gibb (originally from Inverness) marks the Diamond Jubilee of HM Queen Elizabeth II. “Sea of Tranquility,” by James Ross (from Wick, Scotland) is a lovely tribute to astronaut Neil Armstrong. I’m told some of Armstrong’s family members will be in attendance to hear the new tribute.

Why is it an important event for the Celtic community there?
It’s important for so many reasons. It brings the Celtic community together at one of the most wonderful and soul-stirring times of the year. It showcases incredible talent. It’s an opportunity to hear the language of our ancestors. It celebrates the best of human nature.

Why is it an important event for the non-Celtic community there?
For all the reasons stated above. Being Scottish, or Irish, or Celtic is so much more than “Braveheart” or a sentimental scene painted on a shortbread tin. Who knows what a little dose of “Celtic twilight” might do? Foster a new generation of pipers, drummers, fiddlers or harpers? Encourage travel or financial investment to the lands of our ancestors. Inspire a student to choose a university in Edinburgh, or Glasgow, or Dublin. The possibilities are endless. The challenge – and the opportunity – is not to be an exclusive event. There are a host of Scottish societies and events in Manhattan and the cost of entry (economically or socially) is just too restrictive.

What are the plans for the event in the years ahead?
First off, to sustain our current offerings. One of my personal wishes for the Clan is that we engage in an archaeological project at the Medieval Bard’s home at Stilligarry on the island of South Uist. Historians believe we can learn a lot about Gaelic life of the time. We also want to continue to build partnerships with colleges and universities to help support young people in their studies. We also have an interest and an affinity for documentary short films. Our first effort, “The Crafter’s Song” was narrated by Cliff Robertson and was an award winner. We have several new projects in the pipeline which we are anxious to move ahead with.

What does the Clan have planned for 2013 and in the years to come?
Next year will be a busy one for Clan Currie. We open the year with our Burns Night on January 26 and then begin work on NY Tartan Week. Clan Currie created and produces Tartan Day on Ellis Island which last year had the distinction of being the “largest Tartan Day event in the world” with over 72 thousand in attendance. Clan Currie is a member of the newly-formed Tartan Week Alliance which has as its goal to bring better coordination across the anchor events of NY Tartan Week and to aid organizations which may want to come to New York with an exhibition, concert or other program. During the summer months we will be active at Highland Games in the US, Canada and Scotland. (Hey Australian Currie’s – we need you!) We will host our annual MacMhuirich Symposium in Halifax, Nova Scotia with the expert guidance of Professor Michael Newton. During the fall we will participate at the US National Scottish Harp Championship at the Ligonier Highland Games in Pennsylvania for which we are proud to be the Title Sponsor. We also created and host the Harp Glen at the Seaside Highland Games in Ventura, CA. Then we’re back to Christmas again.