The Roots of Scottish Dress 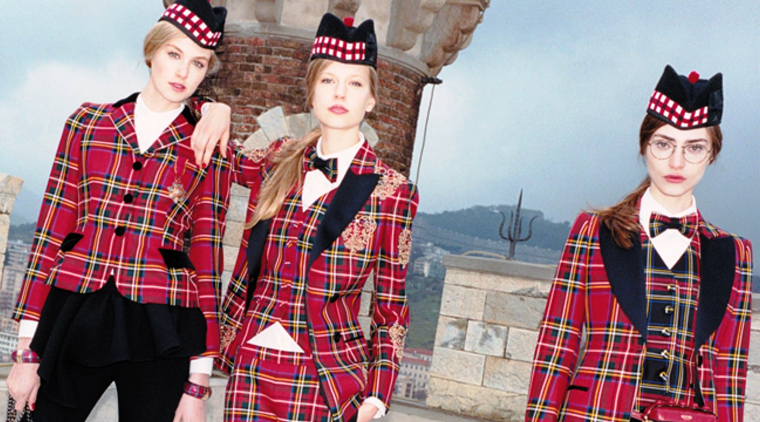 Individual tartans are identified with different Scottish clans, and we when we hear the word “tartan,” the first image that comes to mind is the famed Scottish kilt. Perhaps it is because the kilt is so unique among modern men’s clothing that it has been the object of such fascination, while traditional Scottish women’s clothing is often marginalized as a footnote. However, the annals of time revels paintings, drawing, and written observations of traditional Scottish women’s apparel from roughly the 18th through the early 20th centuries.

Unlike Scottish men, dress of Scottish women was not much different than the costumes of women in neighboring England and Ireland, as well as on the European continent. But, they did have some distinctive pieces of clothing.  So what would the kilt’s equivalent be for women?

One traditional item worn by many Highland women is the arisaid, or earasaid. In his book, A Description of the Western Islands of Scotland, 1703, author Martin Martin described the dress he observed in the western Scottish islands: 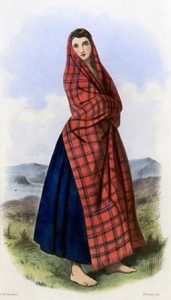 “The ancient dress wore by the women… is called arisad, is a white plaid, having a few small stripes of black, blue and red; it reached from the neck to the heels, and was tied before on the breast with a buckle of silver or brass, according to the quality of the person.  I have seen some of the former of an hundred marks value; it was broad as any ordinary pewter plate, the whole curiously engraven with various animals etc.

There was a lesser buckle which was wore in the middle of the larger, and above two ounces weight; it had in the centre a large piece of crystal, or some finer stone, and this was set all around with several finer stones of a lesser size. The plaid being pleated all round, was tied with a belt below the breast; the belt was of leather, and several pieces of silver intermixed with the leather like a chain. The lower end of the belt has a piece of plate about eight inches long, and three in breadth, curiously engraven; the end of which was adorned with fine stones, or pieces of red coral. They wore sleeves of scarlet cloth, closed at the end as men’s vests, with gold lace round them, having plate buttons with fine stones. The head dress was a fine kerchief of linen strait (tight) about the head, hanging down the back taper-wise; a large lock of hair hangs down their cheeks above their breast, the lower end tied with a knot of ribbands.”

Tartan was not always the pattern worn on the arisaid. Often the cloth was plain or striped, and it seems to have varied by region and by clan. The kertch (in Gaelic – breid caol) was a head dress worn by married women in some regions, while unmarried women often wore a snood, which was a ribbon wrapped about the head which allowed the hair to flow more freely. Regarding tartan patterns on women’s dress,  another observer, William Sachceverell, wrote in 1668:

“The usual habit of both sexes is the pladd;  the women’s much finer, the colours more lively, and the square much larger than the men’s, and put me in the mind of the ancient Picts.  This serves them for a veil and covers both head and body.”

In 1754 Edward Burt wrote about the ladies he observed in Inverness:

“The plaid is the undress of the ladies at Inverness and to a genteel woman who adjusts it with a good air, is a becoming veil.  But as I am pretty sure you never saw one of them in England, I shall employ a few words to describe it to you.  It is made of silk or fine worsted, chequered with various lively colours, two breadths wide, and three yards in length;  it is brought over the head, and may hide or discover the face according to the wearer’s fancy or occasion:  it reaches to the waist behind; one corner as low as the ancle on one side; and the other part in folds hangs down from the opposite arm.”

“The ordinary girls wear nothing upon their heads until they are married or get a child, except sometimes a fillet of red or blue coarse cloth, of which they are very proud;  but often their hair hangs down over the forehead, like that of a wild colt.” 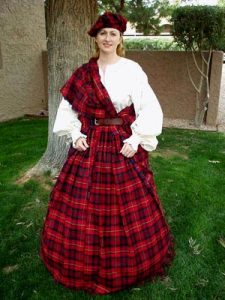 Head coverings, shoulder wrappings, and dresses worn by Scottish women varied by period and by region.  Tartan was certainly known as a Scottish trait, but it seems to have grown in popularity in the 17th and 18th centuries during periods of rising interest in national pride of heritage. Surprisingly, the history of the kilt only dates back only to the late 16th century. Tartan, however, was being produced by Celts centuries before that. There is evidence of cloth in a pattern similar to tartan being produced by Celts as far back as the Halstatt Culture in Central Europe as early as the 8th to 6th centuries BC. Yet the tartans of Scotland that we all know and love is not known to have been produced in Scotland until approximately the same era that kilts are thought to have originated.

Early forms of Scottish tartan could be as simple as stripes or a checkered pattern.  Association of tartan with clans grew as Scotland faced rising oppression at the hands of the British monarchy. In 1746 King George II imposed the “dress act” in a move to suppress all forms of Highland dress, which had begun to be associated with the Jacobite movement.  This coincided with the rise and growing importance of Scottish clans.

Once the Jacobite rebellion was no longer a threat, Highland dress began to be romanticized and the ban was repealed in 1782. Indeed, the Romantic Era had begun, which spawned art, literature, and poetry throughout the West.  In Scotland this movement was represented by the likes of Robert Burns and Sir Walter Scott. So, if adversity, oppression, and the need to form solidarity and unified national front brought Highland dress to represent Scottish identity, then the Romantic Era solidified it. From that point on, the tartan, for both men and women, was here to stay.

It seems that from that period forward, the kilt was raised to precedence as the symbol to represent Scottish culture. But where does that leave Scottish women?  It was not until the 19th century that women began nudging their way forward to claim their place in representing their country through dress.  Their ticket to ride?  Scottish Dance.

The sword dance is known to have been practiced in many parts of Europe dating to prehistoric times. It was originally associated with warriors, and therefore primarily associated with men. There is a record of this type of dance in Scotland written in 1440 about an event that occurred in 1285. Mentioned in the account are pipe players and sword dancers. 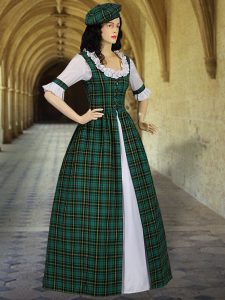 Later, in 1573, a band of Scottish warriors are reported to perform a sword dance before the Swedish king.  So, while this type of dance may have been performed by many different groups, the evidence shows that the Scots have a long tradition of their own unique brand. The tradition survived into modern times and continues to be practiced at Highland games worldwide.

While men proudly danced about their swords, women were traditionally resigned to “social dancing” until one bold young woman stepped forward to compete against the men.  Her name was Lorna Mitchell, and she danced at a time when women’s rights movements were picking up traction in Great Britain and the United States.  Since there was no rule explicitly prohibiting women from taking part, she could not be denied entry. From that moment on, women have been competing in ever greater numbers in the Highland Dance portion of the Highland Games wherever they are held.

The Highland Dance proved to be a leveler between the sexes in not only athletic capabilities and dancing talent.  It was also an arena that allowed women to assert their right to wear distinctive Scottish dress. Early 19th century women’s dance attire consisted of quite long tartan skirts.  As hemlines in general shortened, so did the hemlines in Highland Dance costumes.

By the early to mid-20th centuries, a debate began to rage about whether or not women should be allowed to dance in the kilt and jacket.  Indeed, the man’s Highland attire was now being worn by some female dancers.

However, a more feminine outfit that emphasizes Scottish identity without denying women their own sphere separate from men was designed.

Hence the “kilted skirt,” which is tartan skirt very similar in length and style to the traditional man’s kilt, began to gain popularity not only among female Highland dancers, but among all women of Scottish descent.

We would be remiss to end this column without mentioning the shoes which are identified traditionally with Scottish Highland Dance: ghillies.

Ghillies are a type shoe used on Irish and Scottish dance.  They are made of supple, soft leather, so that they mold to the curvature of the foot. They are quite similar to ballet slippers, with the main difference being in the style of appearance and mode of lacing.

Ghillies look quite reminiscent of early medieval leather shoes, and they are worn by women in both Scottish and Irish dance, as well as by men in Highland dancing.