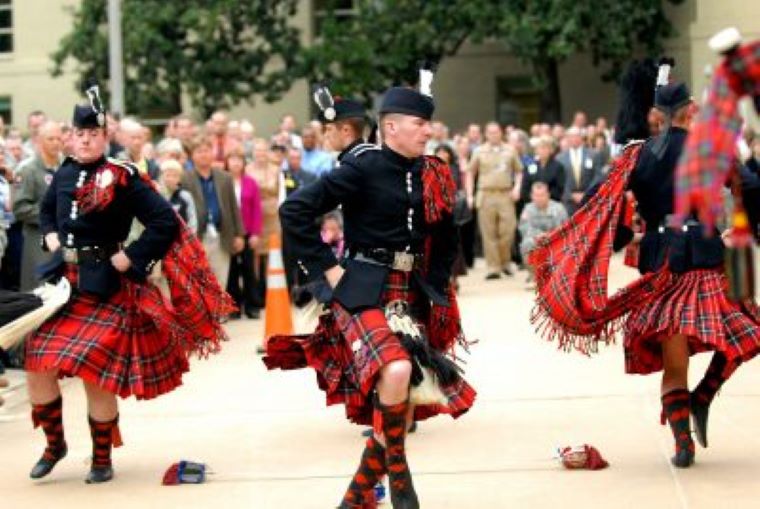 Scottish kilts are known as “The National Dress of Scotland” and are a highly recognized form of dress throughout the world. Kilts have deep cultural and historical roots in the country of Scotland and are a sacred symbol of patriotism and honor for a true Scotsman. The word “kilt” is a derivation of the ancient Norse word, kjilt, which means pleated, and refers to clothing that is tucked up and around the body.

Scottish kilts originate back to the 16th century, when they were traditionally worn as full length garments by Gaelic-speaking male Highlanders of northern Scotland. They were referred to as a léine, Gaelic for “shirt” and typically, the garments were draped over the shoulder or pulled over the head as cloaks. The wearing of Scottish kilts was common during the 1720s, when the British military used them as their formal uniforms. The knee-length kilt, similar to the modern kilt of today, did not develop until the late 17th or early 18th century.

Early Scottish kilts were made using self-colored garments, which were white or dull brown, green or black as opposed to the multicolored plaids or tartan designs recognized today. As dyeing and weaving techniques improved during the late 1800s, tartan patterns were developed, and these plaid designs became native to Scotland using tartan cloth.

The “great kilt” and belted plaid evolved from the tartan wrap, when woolen wraps and plaids began to emerge as a highly esirable form of fashion and a sign of cultural affluence. In time, the garments were worn gathered at the waist in what became the belted plaid. It was called in Gaelic feileadh-mór, meaning “great wrap” or breacan-an-feileadh, meaning “tartan wrap.” The belted plaid became a popular dress among Highland men during the 17th century and as late as 1822, when they were worn largely for ceremonial purposes as opposed to being a part of everyday dress. The female version was referred to as the arisaid, which was worn down to the ankles and generally made from white tartan cloth with a wide-spaced pattern. 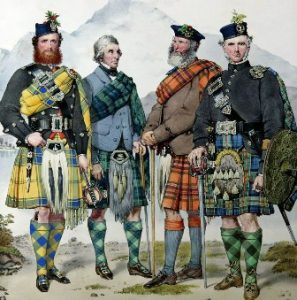 During the mid to late 17th century, the “small kilt,” phillabeg or feileadh-beag, in Gaelic, or “little wrap” developed. The pleated “small kilt” or “walking kilt” is basically the bottom half of the great kilt from the 16th century Scottish Highlands, which was belted plaid using untailored cloth. The garment was loosely gathered into folds and belted at the waist, falling to just above the knee, with a few inches of cloth overlapping the top of the belt. Typically, a separate length of cloth was worn over the shoulders for protection and warmth.

The phillabeg was prevalent during the first half of the 17th century throughout central Scotland and the Highlands. However, in an effort to repress Highland culture, King George II imposed the Dress Act of 1746, which made it illegal for the Highland regiments to wear garments resembling any form of Highland dress, as well as the tartan kilt. King George II’s opponents were threatening to replace him using Jacobite armies. In a panic, he intended to use the act’s provisions to ban the kilt from Highland armies so that he could easily determine those who were supporting the Jacobite position and eliminate them.

However, the phillabeg kilt continued to be worn as a fashionable garment by the Scottish romantics and became a form of protest against the oppression from the English government. The ban was lifted in 1782, at which time the kilt became an enduring symbol of Scottish identity throughout Scotland and the traditional kilt gave way to the creation of kilt garments using tartan patterns, which represented particular clans, families, regions or countries. Generally, when a buyer ordered a kilt, they requested a specific tartan, of which today, there are more than 3,500. When making a kilt, the tartan’s pattern must remain unbroken throughout the garment, therefore, it takes approximately 20 to 25 hours since nearly all the work is still done by hand.

Beginning in the 1790s, the phillabeg style of kilt was replaced by the tailored kilt, becoming the modern Scottish kilt of today. The difference between the phillabeg and the tailored kilt is that the pleats of the kilt are sewn down, as opposed to being gathered, folded and belted. Initially the tailored kilt was worn by the military during the 1790s when they were box-pleated, but there was no tapering. Civilian tailored kilts were made sometime after, although they weren’t pleated until approximately 1820, when they were pleated to the bottom hem line. The Gordon Highlanders became the first military regiment to begin using the knife pleat (1853), and by the 1900s, it was accepted in civilian kilt designs. As fashions transformed, designs of the tailored kilt progressed to linings, waistbands, buckles and straps. Generally, modern-day Scottish kilts have 29 pleats and are made using approximately 8 yards of tartan fabric.

During the 19th century, Scottish kilts were a form of ceremonial dress and worn only for special occasions and primarily to formal events, such as weddings, sporting events, Highland games and holiday celebrations. However, through a global cultural process of recognizing Scottish identity in America, reinventing traditions and building the Scottish-American Heritage, the Scottish kilt is increasingly being recognized as an acceptable form of dress at informal parties, as casual wear or everyday attire and returning to its cultural roots. The Scottish kilt has become a required uniform for Scotland’s Tartan Army soccer team and encouraged for the team’s fans.