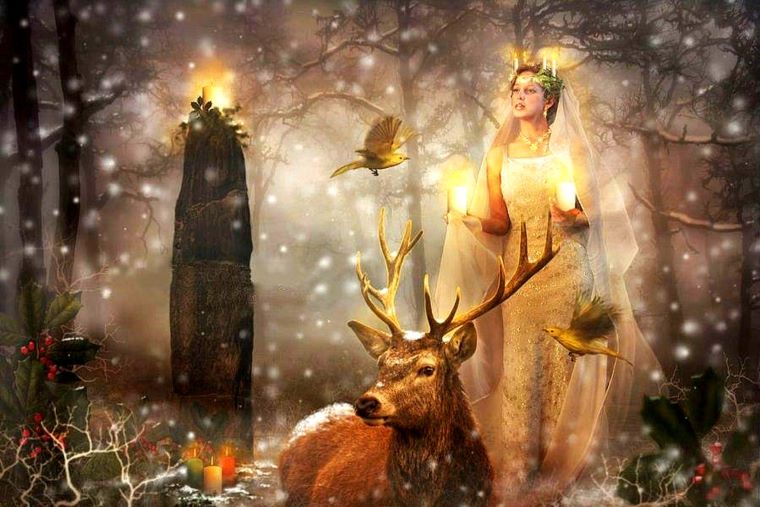 In December, at the very darkest time of the year, we head towards the Winter Solstice, when the new light is born out of the womb of winter. ‘Solstice’ means ‘standstill,’ and refers to the three days around December 21st when the sun appears to ‘stand still,’ or rise and set in the same place. During these long, cold nights, Earth’s very breath seems to falter in the face of the overpowering dark. Then, imperceptibly at first, the sun begins its long journey towards the south, and all of creation begins to exhale.

Rituals for welcoming back the Sun date from the dawn of civilization, as communities came together to celebrate life with feasting, music, dance, drama and above all, light and fire.  Whereas today we tend to think of Christmas as a single day or weekend event, most cultures suspended normal work routines and celebrated for at least twelve days. In ancient Rome, the Winter Solstice was welcomed with a joyous and unruly feast known as the Saturnalia. By the second century AD, they also celebrated the ‘Birthday of the Unconquered Sun’ on December 25th., a custom that originated in Syria. Further north, Scandinavians celebrated ‘Yule,’ a name which could mean ‘wheel,’ or which possibly gives us the root word for ‘jolly.’

The exact nature of early Celtic celebrations are not known because in the fourth century A.D., the Church of Rome overlaid the old festival of the birth of the Sun with the birth of the Son. The actual birthday of Christ had never been certain, so after much debate, the ancient midwinter feast was chosen because people were used to celebrating the birth of a Sun-god/hero at this time of year.  Even then, the Church fathers had to continually remind believers that they were supposed to be worshiping the birth of Christ, not the Sun.  For although this holiday now had a new name, many of the same customs were carried on as they had been for thousands of years, and for the same reason: to banish the dark and welcome back the light. 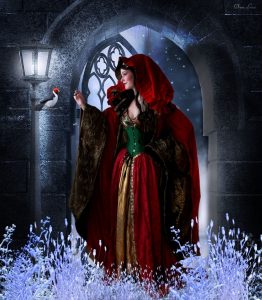 The Origins of Christmas

In the 8th century, the traditional twelve-day pagan festival was declared a sacred season by the Church, and it became the Twelve Days of Christmas, with peaks at December 25th, January 1st, and January 6th. During this time, the Church prohibited all work or public business, except for the labor of cooks, bakers, or any others who contributed to the delights of the holiday. Twelve days of feasting, merrymaking, sporting contests, singing, dancing, and all sorts of joyous anarchy and ‘misrule’ got underway on the magical threshold between the Old Year and the New.  Some of the fun and games probably once belonged to Samhain, the original time for the Celtic New Year, but was transferred to the Christian festival in later times.

Released from work, all sorts of little bands toured the community offering entertainment in exchange for food and drink. Carol-singers and waits sang traditional carols unaccompanied or with harps, fiddles and pipes. Mummers and guisers came out in full force, dressed in colorful costumes, which might include animal skins, masks and bells, and brightened the winter season by performing plays around the community. Often the central theme of these plays was the death and subsequent resurrection of one of the characters, echoing the drama of the old year as it prepared to give way to the new.

In Ireland, the holidays lasted from Nollag Mór (Big Christmas) on December 25th to Nollag Beag (Little Christmas), on January 6th. It was the most important festival of the year, a time to contemplate the special mystery of both human and divine love. People were more than usually devout and generous to others. It was commonly held that the gates of heaven were open at this time and that anybody who died during the Twelve Days went straight to paradise.

Preparations for the season began many weeks in advance, when country people flocked to the Margadh Mór, or Big Market, to ‘bring home the Christmas.’  They took butter, eggs, hens, geese, turkeys and vegetables to sell, and returned home laden with meat, tea, tobacco, whiskey, wine and beer, dried fruit, spice, sugar for the Christmas puddings, toys and sweets for the children, new clothes and household gear.  Everybody gave gifts, a custom that had its roots in ancient law. Shopkeepers gave Christmas boxes of fruitcakes and drinks to their customers, sized according to the amount of business they did there during the year. Farming families gave bacon, hens, eggs, and potatoes to friends and relatives in towns, while they in return received town supplies and coins for their children. Prosperous farmers gave generously to their workers and poorer neighbors: fresh-killed meat for their Christmas dinner and sometimes a Christmas log to burn.

But the greatest gift was to have the whole family beneath one roof again. Sons and daughters who worked in distant towns left work early on Christmas Eve to be back in their old homes before nightfall. Those who lived across the sea made sure they were there in spirit: Many a poor family eagerly awaited the ‘American letter,’ not least because of the substantial sum of money almost certain to be wrapped up in it. And in return, the woman of the house made sure she sent greetings cards containing all the year’s news to “the people away,” providing possibly their only link to home.