Though the Heavens Fall 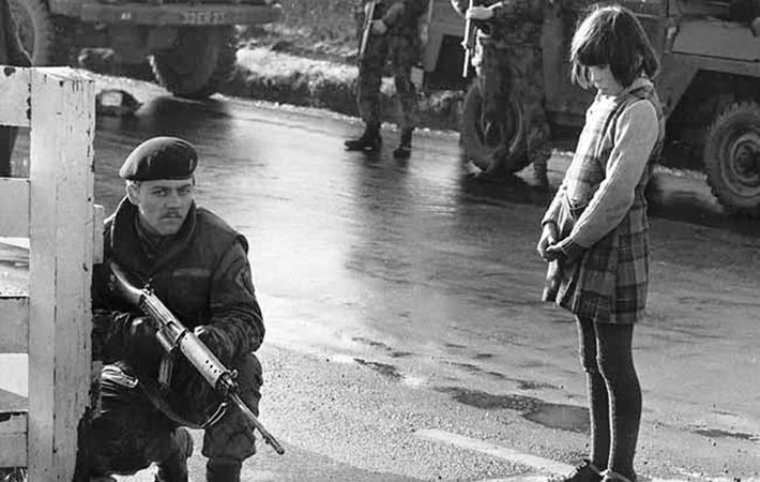 Nova Scotia litigation lawyer turned award-winning-author Anne Emery is no stranger to the world of suspense; over the last decade she has enjoyed great popular and critical acclaim for her Celtic-inspired Collins-Burke Mystery series.

Since her last release, 2016’s Lament for Bonnie, the sedulous scribe has been racking-up the frequent flyer miles.

“I have been travelling a lot. I’ve gone to Ireland and other parts of Europe, and it is likely that some of those experiences will turn up in future books.”

The ongoing adventures of Monty Collins and Father Brennan Burke continue this October with the publication of Emery’s tenth narrative, Though the Heavens Fall, which follows her two sleuths to Northern Ireland. 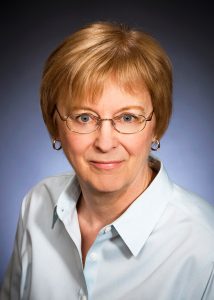 “The book’s plot ranges from the bombings of Dublin and Monaghan in 1974 – for which no arrests have ever been made, despite ‘what everybody knows’ – to the peace process in the mid-1990s. My protagonists are in Belfast and, despite the IRA cease-fire, there is still more than enough trouble to go around.

“It is made worse by a serious breakdown in communication,” she continues. “Brennan knows nothing about the secrets in a file on Monty’s desk, and Monty has no idea what lies behind a late-night warning from the IRA. The two old friends are on a collision course, and will learn more than they ever wanted to know about what passes for justice in mid-1990s Belfast.”

Inspiration for the book came to her suddenly – in the form of a stone-covered sign.

“I was standing before the Bridewell Garda Station in Dublin, gazing at the words inscribed on the pediment – Fiat Justitia Ruat Caelum – ‘Let justice be done though the heavens fall.’ And I thought to myself, ‘There’s my next book’.  I knew there would be no shortage of material for a story about so-called justice in Belfast during The Troubles. As a lawyer, I am fascinated with justice and the systems that uphold or deny it.

“Another of my core interests is philosophy, and my characters agonize over what actions are justified or not justified in war. Coming from an Irish-Canadian background, I am bedevilled by these moral questions in the context of The Troubles, that is, the war, in Northern Ireland.”

Emery explains that the project took much time and research.

“I did a lot of reading about the law and procedure in Northern Ireland, and about the ‘Diplock’ courts. Amazingly, there are still non-jury Diplock trials taking place today, and there was one on when I was in Belfast last year. I met with a solicitor who has plenty of experience in the Belfast courts – he’s had death threats, and his office was twice damaged by bombs. I spoke with former prisoners and with a few people in bars whose anonymous stories have found their way into the book.”

As with many of her past projects, the biggest challenge was navigating among various political ideologies. 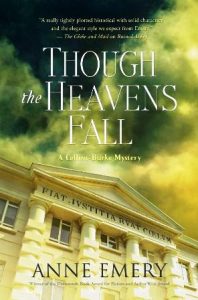 “My characters have a certain perspective, no question, but I try to acknowledge the other points of view as well. It was funny – a few years ago, after Ruined Abbey (2015), I met a friend whose family comes from the Loyalist Portadown area of Ulster; not surprisingly, there were things he didn’t agree with in the novel. Then I got a letter from a pro-Republican Irishman in Saint John, New Brunswick, who said he liked the book, but that I had been ‘too kind to the Brits.’ So I must have done something right!”

With that in mind, Emery believes the new novel signals growth for both her as a writer, and for her leading men.

“It was amazing to watch my characters come to life during this perilous time in their history.”

Though the Heavens Fall is scheduled to hit bookshelves on October 16, but has already received some advanced notice.

“Friends who have read it were spooked! There were like ‘How could you let this happen?!’ My answer was, ‘This is what happened to people over and over during The Troubles.’”

True to form, she is already hard at work on new two projects; the next adventure in the Collins-Burke series, as well as a historical fiction novel set in Ireland in the 14th Century.