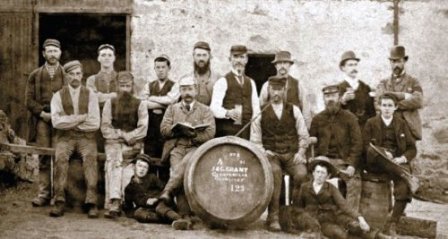 The history of Scotch whisky’s growth is peppered with many moments of crime, smuggling and profiteering, but ultimately its past is one of grandeur. Scotch whisky is now one of the largest spirits categories in the world, filled to the brim with both international brands and smaller, independent and innovative distillers. While the sector has experienced a boom in recent years, fuelled by a resurging cocktail culture and emerging middle markets, its history – and future – hasn’t been plain sailing. As with many spirits industries, Scotch whisky has ridden the tide of economic and political turbulence, from US Prohibition to civil wars and painfully implemented duty rates. But its trials and tribulations make its heritage one hell of a story.

1494 – Distillation comes to Scotland
In the late 15th century, taxation records indicate that early distillation methods came to Scotland, creating Uisge Beatha. One entry in the Exchequer Rolls of Scotland states: “Eight bolls of malt to Friar John Cor wherewith to make aqua vitae’ (water of life).” Such spirits were so high in strength they were often harmful, but techniques were refined by monks who had knowledge of perfumery in the early to mid-16th century. They were driven from their sanctuaries due to Henry VIII’s order for such religious establishments to be disbanded.

1707 – Act of Union
In the late 17th century, Scottish Parliament introduced taxes on malt, which were subsequently increased following the The Act of Union with England in 1707, driving production underground. Illicit production moved to the hills were clandestine stills were hidden. Distillers would signal to each other from the hills when the taxman was approaching, while nearly half of all whisky produced in Scotland was duty-free.

1823 – Excise Act
Smuggling and illegal distilling was standard practice for almost 150 years when the Act of Union was passed, but another law succeeded in clamping such illicit activity to near-extinction. The Excise Act, signed into law in 1823, meant that whisky distilling was once again made legal without duty payments, but in return for a £10 license fee and a set payment per gallon of proof spirit.

1831 – Continuous distillation invented
In 1831 Aeneas Coffey designed the column still, altering distillation methods for good. The still allowed for the creation of grain whisky, since its production takes place continuously, creating a lighter style of whisky. This seemingly more accessible style of whisky opened the category up to a broader market.

1880s – Phylloxera epidemic
In the late 1870s right through into the 1880s, the vine-loving phylloxera bug devastated France’s vineyards, drawing the country’s wine, brandy and Cognac production to a halt. But one industry’s loss was another’s gain, and alternative liqours such as Irish and Scotch whisky were given the chance to flourish. Imbibers, seeking alternative refreshment, opened their eyes to the wonderful world of whisky, generating the start of a boom time for the category.

1909 – Johnnie Walker’s striding man
The rebranding of Walker’s Kilmarnock Whiskies to Johnnie Walker in 1909 was the start of an upward swing for the Scotch whisky brand, and ultimately the industry as a whole. Riding the wave of success afforded by Cognac and brandy’s decline, Johnnie Walker quickly became an iconic brand for the category with its Striding Man motif taking centre stage on all bottles and communication. Now the largest-selling Scotch whisky by a mile, the brand has undeniably created something of a halo effect for the rest of the category, particularly in emerging markets.

1919 – Prohibition
As a nationwide ban on alcohol consumption and production was enforced across the states, thanks to a loophole in American legislation, some Scotch whisky was permitted through for medicinal purposes. This, coupled with an explosion in demand from Canada and islands nearby enough to smuggle across to American shores, saw Scotch whisky volumes simply soar. By the end of Prohibition, when much of America’s distilling industry had been decimated, Scotch producers took the opportunity to satiate imbibers’ thirst, cementing the category’s future in the country.

1963 – Glenfiddich launches
While The Glenlivet might argue that it is the “single malt that started it all”, there’s no doubt that Glenfiddich, owned by William Grant & Sons, was the first to shine a light on single malt Scotch internationally. Its first “straight malt,” launched in 1963, the brand encouraged whisky fans to swap their blended whisky for the delights of single malt. The brand has since grown to become the largest-selling single malt in the world, shifting around one million cases annually, although Chivas Brothers’ The Glenlivet has recently caught up (there are just thousands separating the brands).

1990s – The internet and cocktails
Up until the late 1990s, Scotch whisky’s potential had been held back by a lack of freely-available information and a reputation of being a “grandad’s drink”. As with other subjects, the swift growth of the internet made information regarding Scotch whisky production and brands easily accessible, allowing consumers to discover more about the spirit than ever before. Coupled with the “Mad Men effect”in the late noughties – the resurgence of a thriving cocktail culture that leaned heavily on nostalgia of Prohibition-era USA – Scotch whisky volumes have simply exploded, resulting in heavy investment in increasing production capacity across the board.

2012 – China implements austerity measures
For years China has, and still is, tipped as the next great frontier as a frankly giant middle class emerges. Scotch distillers with their eyes on the East ramped up distillation capacity with fervour, until a decree by the Chinese government to outlaw extravagant spending among officials scuppered their growth plans. Shipments of Scotch whisky to the region have plummeted, while Diageo, which was well underway with its planned £1 billion spend on increasing capacity across its distilleries, bottling halls and warehouses, hit the pause button on development just last year. Chinese growth will recover, as will Scotch whisky, but recovery will take some time.