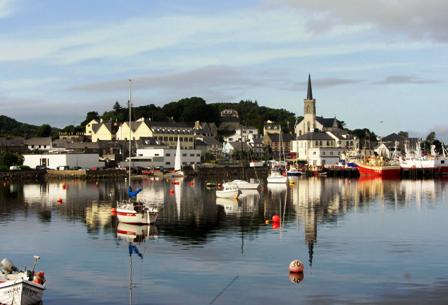 County Donegal is located in the north east of Ireland. So far north, that Donegal is home to Malin Head, the most northern tip of the Irish mainland. Its Gaelic name ‘Dún na nGall’ translates as “fort of the foreigners”, suggesting much of Donegal’s unique spirit. The county’s motto, ”Up here it’s different”, captures its distinctiveness, and distance from cosmopolitan Dublin. Donegal’s isolation from the rest of Ireland has left it with a mystery and wildness unlike anywhere else. This wildness has shaped its history. Donegal’s rocky and erratic landscape helped it to resist British invasion longer than other parts of Ireland. Blanketed in bog and heather, travelling through Donegal feels like a trip to the real Ireland. A four-hour drive from the capital, Donegal easily repays the journey. With castles, cottages and 300 miles of coastline, it is a special place its visitors truly never forget.

Slieve League Cliffs
Typical of the drama of the Donegal landscape, Slieve League are the highest sea-cliffs in Europe, 600m – nearly 2,000 feet! – above the sea. That makes the Slieve League cliffs higher even than their famous neighbours the Cliffs of Moher, and equally as worth a visit. Looking down from Slieve League, keep an eye out for two interesting rocks known as the ‘school desk and chair’. Slieve League is most spectacular in evening,  when the seas reflect the last of the daylight.

The Poisoned Glen
Visitors to the Poisoned Glen often wonder at how inappropriate the poetic name seems for such a beautiful place. Legend decrees that the hollow of the glen got its name when the one-eyed king of Balor was killed by his grandson Lughaidh and poison from his eye flowed into the glen. More likely, is a simple translation error. Only one letter separates Heaven – ‘Neamh’ and Poison – ‘Neimhe’ in Gaelic, the original Irish language. And looking at the landscape, ‘Heavenly Glen’ certainly seems more suited.

Glenveagh Castle
Glenveagh stands in contrast to the rugged Donegal landscape that surrounds it. The Castle and its grounds are a carefully cultivated tribute to the design of Balmoral Castle, the British Royal Family’s holiday retreat in Scotland. Its recent history has been equally star-studded. Glenveagh Castle has also hosted Hollywood royalty – Marilyn Monroe, Charlie Chaplin, Greta Garbo and Clark Gable, all stayed here. The interior of the Castle is memorably marked by the eccentricity of its owner, Henry McIlhenny. Almost every room contains a trace of his passion for hunting, with paintings, antlers, and taxidermied deer.

Glenveagh National Park
Glenveagh is the the second largest national park in Ireland. In the grounds you can see the descendants that evaded McIlhenny’s grasp – the Park is home to the largest herd of red deer in Ireland. The once extinct golden eagle was also reintroduced into Glenveagh in 2000. The serene Glenveagh National Park has a darker history than you might guess. It was originally the estate of infamous landlord, John Adair. The Park’s breathtaking views were not without cost. Adair passed into notoriety for the “Derryveagh Evictions”, when he cast 244 tenants out of their homes to clear the land to enhance his view of the surrounding lands. Many of the evicted tenants spent their lives in the local workhouse in Letterkenny.

St Patrick’s Cross, Cardonagh
Ireland’s patron saint Patrick is closely associated with Donegal. The county’s Gaelic name ‘Tir Connaill’ means land of Connall clan, the first family Patrick converted to Christianity.  Donegal’s heraldic crest shows the sign of the cross that appeared on the Connall chieftain’s shield when Patrick blessed them following their conversion. This 7th-century cross located in the grounds of a church founded by St. Patrick in Carndonagh is the chief remaining monument to him.  Known as Carndonagh High Cross or the Cross of Saint Patrick, the monument is also one of the most important early-Christian relics in Britain and Ireland. St. Patrick’s Cross features the Tree of Life, one of Ireland’s most meaningful symbols, representing the link between heaven and earth.

Rossnowlagh beach
Rossnowlagh or ‘The Heavenly Cove’ is one of Europe’s top Blue Flag surfing beaches. The force of the Atlantic ocean and the unique funnel shape of Donegal Bay combine to create towering waves, especially in winter, when waves stretching up to 7 metres, or 20 feet high, have been recorded.

Fintown Railway
Donegal’s only functioning railway comes highly recommended by Brian Friel, one of Ireland’s most-celebrated playwrights. Friel attests: “What is on offer is a unique journey along the shores of a lake as grand as any in Switzerland or Minnesota”. A three mile return trip on the Fintown Railway takes you through mountains and along the shores of Loch Finn, offering a unique perspective on Donegal’s spectacular landscape.

Glenevin Waterfall
Located between Straid and Crossconnel, 2 kilometres from the village of Clonmany, Glenevin Waterfall is over 40ft tall. Glenevin’s wedge-shaped fresh mountain water falls onto a black rock called Pohl–an-eas. The name translating as ‘ferment pool’ is taken from the foam that can be seen on the surface of the pool’s waters.

New Mills, Letterkenny
visit to Letterkenny’s New Mills is a reminder of Donegal’s industries of the past. Corn and Flax milling were introduced by planters from Britain and became vital to the local economy. Visitors to New Mills today can see one of the largest water wheels in Ireland in action, driving the corn mill’s still functioning machinery. These water-driven wills were used in the making of fine Irish linen, still famous around the world today.