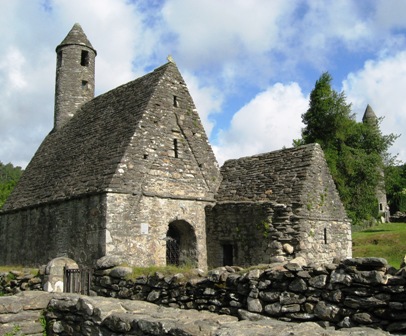 With connections to ancient Ireland, Catholic shrines and difficult hill climbs, Ireland has a lot to offer those seeking a pilgrimage or even those just looking for some thinking time.

Glendalough
The beautiful Glendalough was the site of the renowned early medieval monastic settlement founded by St. Kevin located in a stunning valley in the Wicklow mountains. St. Kevin’s Trail follows in the saint’s steps through the peaceful countryside and explores the monastery where he spent most of his life in prayer taking in the Wicklow Gap and the Glendasan River along the route.

Croagh Patrick
One of Ireland and Mayo’s most famous landmarks, Croagh Patrick (sometimes referred to as the holiest mountain in Ireland) is located just outside of the beautiful and vibrant town of Westport and known as the place where St. Patrick is said to have spent 40 days and 40 nights praying and fasting during his missionary work in Ireland. Pilgrims climb the 2,500 ft mountain to the church at its peak every day of the year but thousands of visitors can be expected on the last Sunday of July each year, or “The Reek” as it’s locally known, to celebrate mass, beginning their pilgrimage at St. Patrick’s statue at the mountain’s base.

Knock
Another county Mayo favorite, Knock is internationally renowned as a place of prayer and pilgrimage. In 1875, fifteen Irish people claimed that the image of Our Lady, St. Joseph, St. John the Evangelist, an altar, cross and a lamb appeared to them in the small village. Since the apparition, several apparent cures, and the visits of Pope John Paul II and Mother Teresa, Knock has been transformed into a compound of prayer spanning across one hundred acres and containing five churches.

Lough Derg
An island retreat located on Station Island in Lough Derg, County Donegal, this pilgrimage site is home to St. Patrick’s Purgatory, the site where God is said to have shown St. Patrick a cave that was the entrance to purgatory. One- or three-day retreats run on the island during the summer months.

Gleann Cholm Cille Valley
Situated in the heart of the Donegal gaeltacht. Gleann Cholm Cille is home to one of the finest collections of pillar stones in Ireland. The pillars are dotted along 14 stations, some of which are located on private land and can only be visited when given permission during summer months. The main pilgrimage takes place each year on July 9, the feast-day of Colm Cille.

Pilgrim’s Path, Clonmacnoise, Co. Offaly
Running through Offaly from Ballycumber to the ancient monastery of Clonmacnoise, the Pilgrim’s Path runs along an esker and has now been developed as a cycle route offering a view over the surrounding countryside. Clonmacnoise is also a place of pilgrimage in itself – the 6th century monastery founded by St. Ciaran on the banks of the River Shannon and the home of a major center of religion, learning, craftsmanship, and trade in the 9th century when Ireland was known as “The Island of Saints and Scholars.”

Our Lady’s Island
Dedicated to the Virgin Mary, Our Lady’s Island stands on the northern shore of Lady’s Island Lake in Co. Wexford. Travelers from far and wide come to the small site each summer to worship Our Lady and to visit the shrine in her honor at the entrance to the island which is connected to the mainland by a causeway.

St. Brigid’s Way
Pilgrims pay homage to the patron saint of county Kildare, St. Brigid, at the Hill of Faughart in County Louth. Traveling to the nearby Kilcurry church you can see a relic of the saint (believed to be part of her skull!) before heading to the mound on top of Faughart hill where Edward Bruce, brother of Robert Bruce of Scotland, is buried. The site contain the ruins of an ancient high cross and monastic settlement and St. Brigid’s Stone, a penitential station,beside a holy well.

Croghan Hill
An extinct volcano located in County Offaly, Croghan Hill is believed to be one of the first areas in Ireland to be christianized. On its southeast side is a 5th century graveyard associated with Bishop Mac Caille, believed to be the son of St. Patrick’s sister St Darerca. St. Patrick is also said to have climbed the hill. As legend tells it, his horse jumped halfway down, hit a rock and a well sprung from the ground he hit. The well is situated within 500 meters of the hill and each St. Patrick’s Day locals visit the site to drink from the well and to pray.

Caher Island
Yet another pilgrimage site in county Mayo, Caher is a small island off Mayo’s coast that is home to a 6th and 7th century early Christian monastic settlement St. Patrick is believed to have visited after his time spent fasting on Croagh Patrick. Two weeks after Reek Sunday, pilgrims travel to complete a circuit of the island in prayer.