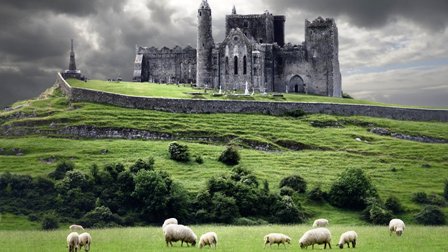 Ireland’s reputation precedes itself, so first-time visitors might think they know what to expect: fields of clover, gabby locals, etc. But there’s so much more to Ireland than its stereotypical charms. Skip the bus tours stopping at leprechaun-filled souvenir shops and find better things to do with your lips than kiss the been-around-the-block Blarney Stone. Instead, check out these unmissable Ireland experiences for first-timers.

1. Literary Dublin
Not only can the Irish talk up a storm, they’re also wizards with the written word, claiming four winners of the Nobel Prize for Literature. Browse books, letters and manuscripts and listen to evocative audio recordings in the Georgian mansion housing the Dublin Writers Museum. Then stroll through Trinity College’s beautiful Old Library, home to the Book of Kells, dating from around 800 AD. For the ultimate literary experience, visit Dublin on June 16th, when Victorian-garbed masses take to streets for Bloomsday, celebrating James Joyce’s masterpiece, Ulysses.

2. Killarney National Park
Fanning out from the vibrant town of Killarney in County Kerry, Killarney National Park is a wonderland of mountains, lakes and woodlands. Wildlife in the park’s sprawling 10,236 hectares includes Ireland’s only remaining wild herd of native red deer (living here continuously for 12,000 years), as well as fish, rare insects and birds like the white-tailed sea eagle. Beyond the park boundary, don’t miss the glorious Gap of Dunloe, a majestic mountain pass most entertainingly explored by jaunting car (pony-and-trap) helmed by a charismatic jarvey (driver).

3. Galway City
Situated on a wide, arcing bay on Ireland’s west coast, Galway is an excellent base for trips to the windswept Aran Islands and the remote, rugged Connemara region. But no one would blame you for not leaving this cobblestoned college town at all. What Galway lacks in sightseeing it more than makes up for in atmosphere (eg, pubs). Soak up the timeless charm of The Crane and Taaffes, catch up-and-coming bands at Roisin Dubh or hang out with hip Galwegians at The Blue Note.

4. The Rock of Cashel
Don’t let the unassuming name fool you: the Rock of Cashel is no mere rock. Standing proudly on a green hill rising from County Tipperary’s plains, it’s a historic treasure trove of ancient religious structures including a 12th-century Romanesque chapel and a 13th-century Gothic cathedral. But its history dates back much further – for more than 1000 years it was a symbol of power and the seat of kings and churchmen who ruled over the region.

5. Trad
Traditional Irish music, aka ‘trad’, is the heart of Ireland’s pub scene (and Guinness is the soul, but more on that later). The small village of Doolin in County Clare is famed as the centre of Irish music, but lively, informal sessions of upbeat jigs and heart-breaking ballads played with bodhráns (hand-held drums), fiddles, tin whistles, accordions and more strike up in pubs throughout the country.

6. Brú Na Bóinne
Predating Stonehenge and the Egyptian pyramids, Brú Na Bóinne in County Meath is a mind-boggling testament to the achievements of prehistoric humans. This extraordinary necropolis includes the passage tomb Newgrange, designed during the Stone Age in c 3200 BC with a chamber that floods with sunlight on the winter solstice. Solstice tickets are drawn by lottery but you can catch a re-creation throughout the year.

7. Giant’s Causeway
Between Belfast and the walled city of Derry/Londonderry in County Antrim, Northern Ireland, the Giant’s Causeway is a UNESCO-listed geological wonder. Formed some 60 million years ago by cooling lava, its 40,000 hexagonal basalt columns jut into the sea. Legend has it they were built by giant Finn McCool to fight his rival Benandonner in Scotland.

8. The Dingle Peninsula
County Kerry’s Dingle Peninsula is awash with postcard-worthy vistas of sandy surf beaches and Caribbean-blue stretches of ocean. Its ‘capital’, the charming fishing village of Dingle, is a tangle of higgledy-piggledy streets teeming with art and craft shops, old-fashioned pubs and sublime seafood restaurants serving the day’s catch.

9. Cliffs of Moher
Along Ireland’s new 2500km-long coastal drive (aptly named the Wild Atlantic Way), the entirely vertical Cliffs of Moher in County Clare rise to a dramatic height of 203m (666ft). On a clear day the views are tremendous, with the Aran Islands etched on the waters of Galway Bay. From the edge you can feel the cool Atlantic spray on your cheeks and hear the booming far below as the waves crash and gnaw at the soft shale and sandstone.

10. The perfect pint
Pouring a Guinness is an art form in Ireland, and no trip is complete without at least one pint of the black stuff. Savour an expertly drawn pint at John Kavanagh (‘the Gravediggers’) or Mulligan’s in Dublin, Matt Molloy’s in Westport, County Mayo, or Tigh Neachtain in Galway. Just avoid touristy pubs where they commit the sacrilege of drawing a shamrock on the head of your beer.