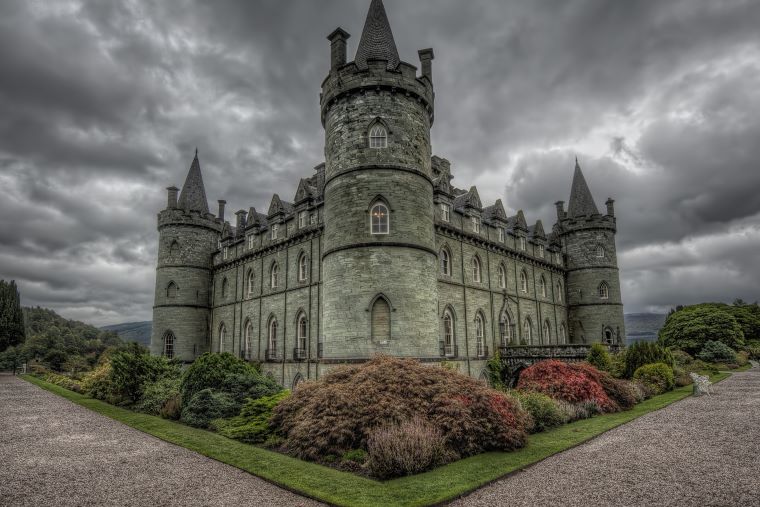 Eilean Donan
Eilean Donan is a small island in Loch Duich in the western Highlands of Scotland. Connected to the mainland by a footbridge, the island is dominated by a picturesque medieval castle. The original castle was built in the early 13th century as a defense against the Vikings. Today, the castle is one of the most photographed monuments in Scotland and a popular venue for weddings and film locations. It has appeared in such films as Highlander and The World Is Not Enough.

Edinburgh Castle
Edinburgh Castle is a magnificent example of Scotland’s architecture, ideology, political tact and military importance. High up on the summit of a dormant volcano lurks this dominating structure. Its presence is visible for miles in every direction. Intimidating all who would challenge them, the Scottish utilized Edinburgh Castle for all of their major battles and military strategizing. A strong standing symbol of their perseverance and struggle for independence, Edinburgh Castle is one of the top tourist attractions in Scotland.

Ben Nevis
Situated deep into the highlands of Scotland, Ben Nevis is the British Isle’s highest summit. Offering stunningly spectacular views and historical malice, Ben Nevis attracts viewers, hikers and climbers alike to celebrate the tranquility of the surrounding nature. The mountain is readily accessible via a man-made path which zig zags up its south westerly face, while the rock face on the north west of the mountain is strictly for experienced mountaineers only.

Loch Ness
One of the most famous lakes in the world, Loch Ness is the second largest loch in Scotland after Loch Lomond (and due to its great depth it is the largest by volume). About a mile wide at most places it holds the legend of an infamous sea monster. The most notorious mythical creature of modern time, Nessie, is said to dwell in the lake. With an air of mystery, the intriguing area of Loch Ness should not be missed. You might even get a glimpse of Nessie! 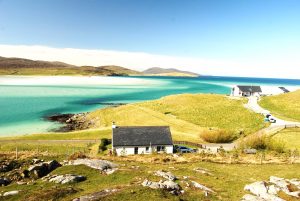 Luskentyre Beach
Luskentyre beach is situated on the spectacular west coast of South Harris in the Outer Hebrides. One of the most beautiful color-washed coastal areas of Scotland, its blue-green seas shimmer against creamy sands and the vibrant green hillside. Peaceful and timeless, Luskentyre Beach has been voted Britain’s best beach.

Stirling Castle
Stirling Castle is one of the most spectacular castles in all of Scotland. High up on the vertical rock mass of Castle Hill, it rests, defensively positioned along the steep surrounding cliffs. Experience the art, culture and status that encompassed 16th century in Scotland. History lovers will not want to miss this popular tourist attraction.

Skara Brae
Located on the main island of Orkney, Skara Brae is one of the best preserved Stone Age villages in Europe. It was covered for hundreds of years by a sand dune until a great storm exposed the site in 1850. The stone walls are relatively well preserved because the dwellings were filled by sand almost immediately after the site was abandoned. Older than Stonehenge and the Great Pyramids, it has been called the “Scottish Pompeii” because of its excellent preservation.

Cuiillin Hills
Located on the most northern island of Skye, the beauty of the rolling peaks of the Cuiillin Hills is undeniable. These hills are made up of two diverse formations. The Red Cuiillins are a red granite formation, which are softer and more inviting in appearance. In opposition, the Black Cuillins are more harsh in appearance with sharp, jagged peaks of volcanic rock that scale the skyline and warn off those who are unwelcome.

Melrose Abbey
Melrose Abbey was founded in 1136 by Cistercian monks, on the request of King David I of Scotland. This grand ruin with lavish masonic decoration is thought to hold the embalmed heart of Robert the Bruce, another king of Scotland. Truly a place of legends, Melrose Abbey is one of the most historically significant architectural structures in Scotland.

Broch of Mousa
One of the most prestigious and well-preserved brochs in the Shetland Islands, this impressive structure is a rotund tower lined with stone internally and externally to provide the optimum strength as a defensive structure. The tower was built around 100 BC and is the only broch which is complete right to the top, including the original intramural stair.