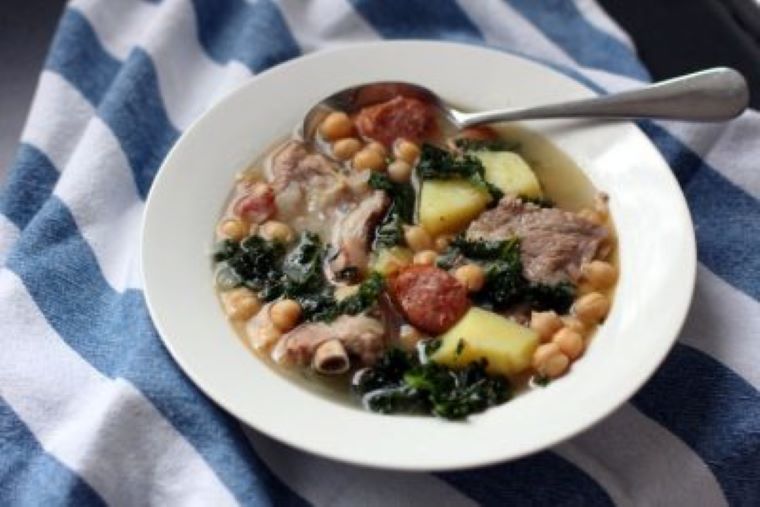 Traditional Galician Stew is scrumptious anytime of the year, but it is particularly warming during the long winter months.

Cabbage comes in different colours throughout Spain but, be it red, white or green; the largest are grown in Galicia. They are enormous. Cabbage can be used in a wide range of soups and in stews, as is the case with this recipe. It is for a traditional Galician stew.

Cabbage is far from the only ingredient. When you look at the meat that is included, you might be tempted to think it is not the most important. But two Galician chefs told me that this stew could, if so desired, survive just fine without the meat. But that, without the cabbage and chickpeas, it would not be anywhere near as good. This is a filling and warming stew that is served throughout this very distinctive corner of Spain.

Soak the chickpeas overnight in cold water. Bring the beef, pig’s head, bacon and ham knuckle to the boil in three liters of salted water. Cover and simmer for around one hour. Cook the chickpeas in a pan with some of the meat stock for one hour. In a second pan boil the cabbage in some meat stock for up to 30 minutes. After one hour remove the ham knuckle and add the potatoes to the meat. Then place on the chorizo and cook for a further 25 minutes. Then lift the meat, potatoes and sausages from the stock. Drain the chickpeas and cabbage. Arrange all the ingredients separately in a preheated serving dish and serve immediately.

Ith do shàth!
Cabrini
P.S: I would like to invite all our readers to send me their favourite recipe – and their favourite memories that go with it – to cabrini@celticlife.ca