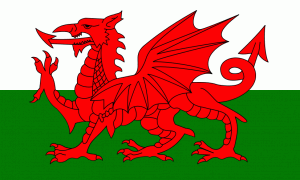 Wales is a country that is part of the United Kingdom and the island of Great Britain, bordered by England to its east and the Atlantic Ocean and Irish Sea to its west. It has a population of three million, and a total area of 20,779 km2 (8,023 sq mi). Wales has over 1,200 km (750 mi) of coastline, including its offshore islands; the largest, Anglesey (Ynys Môn), is also the largest island in the Irish Sea. Wales is largely mountainous, with its highest peaks in the north and central areas, especially in Snowdonia (Eryri), which contains Snowdon (Yr Wyddfa), its highest summit.

During the Iron Age and early medieval period, Wales was inhabited by the Celtic Britons. A distinct Welsh national identity emerged in the centuries after the Roman withdrawal from Britain in the 5th century, and Wales is regarded as one of the modern Celtic nations today. Gruffydd ap Llywelyn was recognised as King of Wales in 1057. Llywelyn ap Gruffydd’s death in 1282 marked the completion of Edward I of England’s conquest of Wales. The castles and town walls erected to ensure its permanence are now UNESCO World Heritage Sites. Owain Glyndŵr briefly restored independence to what was to become modern Wales, in the early 15th century. Wales was subsequently annexed by England under the Laws in Wales Acts 1535–1542 since when, excluding those matters now devolved to Wales, English law has been the legal system of Wales and England. Distinctive Welsh politics developed in the 19th century. Welsh Liberalism, exemplified in the early 20th century by Lloyd George, was displaced by the growth of socialism and the Labour Party. Welsh national feeling grew over the century; Plaid Cymru was formed in 1925 and The Welsh Language Society in 1962. The National Assembly for Wales, created in 1999 following a referendum, holds responsibility for a range of devolved policy matters.

Wales lies within the north temperate zone, its changeable, maritime climate making it one of the wettest countries in Europe. It was an agricultural society for most of its early history, the country’s terrain making arable farming secondary to pastoral farming, the primary source of Wales’ wealth. In the 18th century, the introduction of the slate and metallurgical industries, at the dawn of the Industrial Revolution, began to transform the country into an industrial nation; the UNESCO World Heritage Sites Pontcysyllte Aqueduct and the Blaenavon Industrial Landscape date from that period. The south Wales coalfield’s exploitation in the Victorian era caused a rapid expansion of the Welsh population. Two-thirds of Wales’ three million population live in south Wales, mainly in and around the cities of Cardiff, Swansea and Newport, and in the nearby valleys. Another concentration live in eastern north Wales. Cardiff, Wales’ capital, is the country’s most populous city, with 317,500 residents, and for a period was the biggest coal port in the world. Today, with the country’s traditional heavy industries (coal, steel, copper, tinplate and slate) either gone or in decline, Wales’ economy depends on the public sector, light and service industries, and tourism.

Although Wales shares a close political and social history with the rest of Great Britain, it has retained a distinct cultural identity. Wales is officially bilingual, the Welsh and English languages having equal status. The Welsh language is an important element of Welsh culture, and its use is supported by national policy. Over 580,000 Welsh speakers live in Wales, more than 20% of the population. From the late 19th century onwards, Wales acquired its popular image as the “land of song”, attributable in part to the revival of the eisteddfod tradition. At international sporting events, such as the FIFA World Cup, Rugby World Cup and the Commonwealth Games, Wales is represented by national teams regulated and organised by over fifty national governing bodies of sports in Wales. At the Olympic Games, Welsh athletes compete as part of a Great Britain team. Although association football has traditionally been the more popular sport in north Wales, rugby union is seen as a symbol of Welsh identity and an expression of national consciousness.