A Taste for Travel 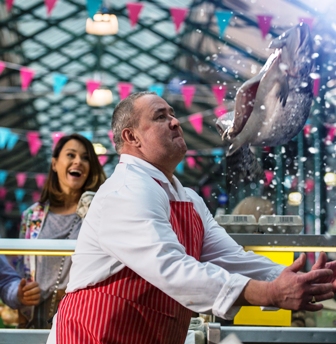 Northern Ireland celebrates a Year of Food & Drink in 2016. As Celtic Life International correspondent Eimear O’Callaghan explains, a culinary revolution is satisfying both area residents and visitors, and feeding the local economy

Steaming, inky-blue mussels in Armagh cider, served in a white enamel pot, followed by slow-cooked beef cheeks and braised red cabbage, warm both heart and belly. It is midweek in the middle of a Northern Ireland winter, and the local boats have only put to sea twice in five days, but Harry’s Shack is buzzing.

The Shack is one of the most talked-about new restaurants in Northern Ireland — famed for its location as much as for its food. Weeks after it opened in 2014, a rare combination of exceptionally high tides and huge winter swells brought the sea to two feet above its internal floor level.

“Debris was flung at us. Even a car washed past us,” laughs owner Donal Doherty. “I knew that what I’d done was either madness or genius.”

‘Local’ and ‘fresh’ could be bywords for this converted National Trust ‘shed’, nestling at the top of Portstewart’s glorious mile-and-a-half-long beach, and as near to the sea as it can get without being swept away. As the waves roll in and seasons change, diners hankering after fabulous fish, spectacular scenery, ocean smells and the grinding of sand beneath their feet, happily travel miles regardless of the weather.

‘If it’s not fresh, we don’t serve it,” Donal insists, “and we guarantee that every bit of fish we serve is brought ashore on the north coast, the first pick of the day.”

“In summer, fishermen bring lobster from the harbour five minutes away. The rest of our fish comes from boats that land at Greencastle across the bay. All year round, we’ve fabulous mussels from Grade A waters three bays away. And we grow our own vegetables and leaves organically, in our two-acre walled garden.”

Translucent white hake with tomato, chorizo and baby potato stew, and haddock in buttermilk batter, are the most popular dishes on his menu. Plaice, megrim or lemon sole, and brill and black sole in summer, are fried simply in creamy, yellow butter or in the delicate, award-winning Broighter Gold rapeseed oil, produced just fifteen miles away.

Five years ago, Donal couldn’t have sold ten per cent of the whole fish that now comprise 80% of the menu produced by his chef, Derek Creagh. ‘People are trying new things, wanting something different. They know it’s local. They know it’s fresh. They trust us. They’re eating fish like gurnard and megrim that we’d have struggled to sell two years ago.”

What’s happening at Harry’s Shack is indicative of a new excitement that’s sweeping through Northern Ireland. Peace has dawned, the night-time economy has recovered, tourists are visiting in droves and well-travelled locals, inspired by experiences abroad, are demanding more from producers and chefs.

For many years, high-end dining was virtually non-existent here, but the last few years have witnessed a proliferation of fabulous new restaurants which pride themselves on locally-sourced, seasonal produce. Last September, Ox and Eipic at Deanes — both in Belfast city centre — brought prestigious Michelin stars to Northern Ireland for the first time in five years. Five other restaurants feature in Michelin’s Bib Gourmand listings.

As the saying goes, a rising tide lifts all boats. James Street South, Mourne Seafood Bar, Brown’s in Derry, the Ramore complex in Portrush, the Boathouse in Bangor, and dozens more, testify to higher standards and wider choices. From pop-up street traders to farm-shops and farmers’ markets, from pub grub to high-end dining — chefs and restaurateurs are upping their game and exploiting the riches around them.

Twenty-six-year-old Dara O hArtghaile and his wife Ciara are typical of the new generation of innovative and enterprising producers re-inventing Northern Ireland cuisine. After a year in New Zealand, being ‘wowed’ by the vibrancy of its cafe and artisan culture, they returned to the picturesque, County Antrim seaside town of Ballycastle determined to introduce the same thing there. 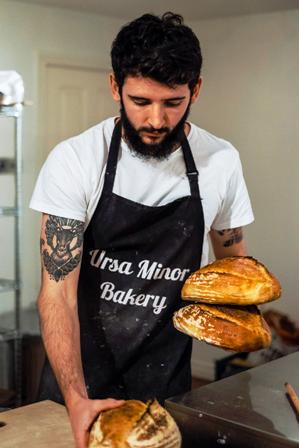 Dara taught himself how to bake ‘real’ bread.  Two years ago, at 4 a.m. on a cold February morning, he placed four organic, sourdough loaves in his mother’s oven and paced the floor anxiously, waiting to see what would emerge.

“Baking those loaves for a new cafe in Coleraine was the most terrifying thing I’d ever done,” he laughs, recalling his first foray into professional bread-making. He needn’t have worried.

After operating the Ursa Minor bakery from their home kitchen for fourteen months, demand from restaurants and the public forced them to move to new premises. Dara works through the evenings, growing starters, resting dough, folding and hand-shaping loaves in a traditional process that takes up to 36 hours.

While her husband honed his bread techniques, Ciara gave birth to their son and perfected her patisserie skills. She now runs the Bakehouse Cafe, offering “real bread, real coffee and real cakes” three days a week.

The tiny cafe, with its pastel-coloured chairs and stripped timber floor, has been closed all day and feels chilly. But when Dara arrives, carrying two loaves straight from the oven, the aroma of freshly baked bread warms it instantly.

He watches closely as Ciara cuts into them – the rugged, golden crust cracking open and emitting a sigh of steam. “Leave it to cool and let the crumb set,” he suggests. But the temptation to dunk a thick slice into golden olive oil and balsamic vinegar, and savour its sourness and ‘wheatiness’, proves irresistible.

Ciara, meanwhile, tantalizes with the promise of French-inspired patisserie, made in summer with Northern Ireland apples and berries. In winter she specializes in cream-filled almond éclairs, topped with burnt caramel and toasted, flaked almonds.

Stressing the ‘honest, fresh, local, seasonal, no additives’ nature of their produce, Ciara observes that, “Organic food is what my grandparents used to call ‘food’. People want to trust what they’re eating. They’re asking what’s in it and why.”

A few days earlier, the couple had experimented by adding kelp, harvested on Rathlin Island and smoked at the North Coast Smokehouse, to their loaves. “It was salty, smoky and exciting,” says Dara. “With natural resources like that, why shouldn’t our food be up there with the world’s best?”

Awards and certificates adorn the walls and mahogany sideboards of Armagh’s 250-year-old Newforge Country House, testifying to the quality of food served by chef, John Mathers, in what’s been his family home for five generations.

“Our philosophy is simple: honest food using the best ingredients we can find,” he explains. “I bake my own wheaten bread every day. Fresh from the oven and spread with the famous Abernethy butter, produced just 14 miles from here. What could be better?”

A deep, creamy round of horseradish panna cotta trembles on my salad of smoked Lough Neagh eel and sea trout, cured and hot-smoked by John himself. The natural yoghurt and cream used to make it come from Clandeboye Dairy – 40 minutes away – and are infused with horseradish from his garden. Shavings of pickled, home-grown vegetables and slivers of radish and beetroot add to the starter’s elegance.

“We don’t use local produce just for the sake of it. But when it’s fantastic and warrants a place on our menu, it’ll be there.”

A look-over the Newforge menus bears this out: Glenarm Estate shorthorn beef that’s been salt-aged at the internationally-acclaimed Hannan’s Meats a mile away; pale-smoked hake; artisan cheeses made an hour’s drive away from unpasteurized cows’, ewes’ and goats’ milk; vegetables from the Mathers’ farm; home-made apple and rhubarb chutneys and, for breakfast, Moyallon dry-cured bacon, and eggs from hens which roam the Mathers’ orchard. 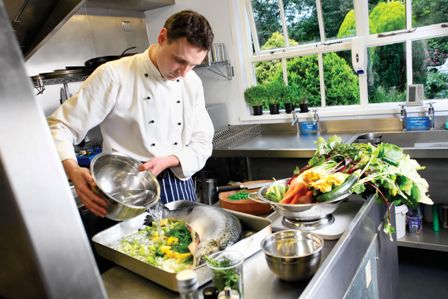 John believes Northern Ireland is finally on the map as a food destination. “We were insular for far too long but times have moved on and the negative coverage that we endured during 30 years of the Troubles has gone. People are realizing how good our produce is and we’re making headlines for the right reasons.”

“If you’re sitting in the sunshine of Tuscany, looking out over the fields and sipping red wine, it’ll taste pretty good,” John says. “But when you’re here on a crisp, sunny day in autumn, with a glass of Armagh cider made from apples grown half an hour away – that’s fantastic too. Location makes for a better fit.”

It’s also fitting too that exactly 170 years after ‘an Gorta Mór’ — the Irish famine — when a million people died and two million emigrated, chefs and producers are confidently declaring their food among the best in the world. Words like ‘local’, ‘trust’ and ‘honest’ keep recurring.
“We’ve been slow to shout about how good we are,” says chef and author, Emmett McCourt. The Derryman’s book, ‘Feast or Famine’, was named Best Culinary Travel Book at last June’s Gourmand Awards in China.

“We’re surrounded by a wealth of natural resources,” he continues. “Great Atlantic shores and a luscious landscape. We’ve grass-fed cattle and lamb, an abundance of fish and shellfish, and a fantastic new generation of culinary talent. We treasure a connection with the land that goes back generations — and that sets us apart.”

Emmett, whose earliest food memory is the smell of freshly-baked bread wafting across a rubble-strewn Derry street at the start of the Troubles, agrees that three decades of violence held Northern Ireland back. Food scares have damaged public confidence. 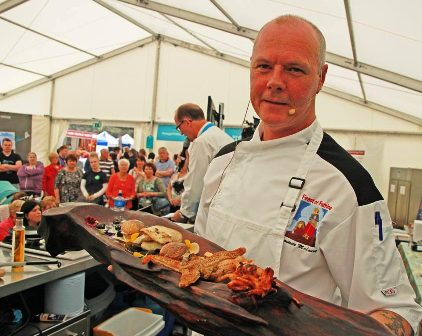 “People care now about the provenance of what they’re eating and they want a shorter food chain. They want to know their bakers and butchers, to hear their stories and build relationships with them.”

Emmett’s excited by the new confidence that’s inspiring chefs and encouraging consumers to demand more. “Northern Ireland food and drink are finally coming of age. At long last, we and our heritage have found our rightful place in the kitchens of the world.”