A TASTE FOR TRAVEL TOO 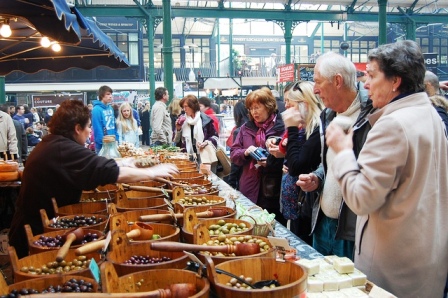 Farm-shops and farmers’ markets are springing up, and being supported, in towns and villages across Northern Ireland. Shoppers throng Belfast’s 19th century St George’s Market at weekends and arm themselves from its mesmerizing array of local produce.

The mouth-watering aromas of sizzling pork, freshly-baked breads, ripening cheeses and freshly-brewed coffee intoxicate Saturday visitors, and a band with the risqué name, The Folkin’ Eeejits, entertains them enthusiastically with favourites like Dirty Ol’ Town and Galway Girl.

Chris McNabb, from Silverfin Seafood Specialists in Newry, is busy at one of the five fish stalls. Gone are the days when, for religious reasons, many people only ate fish on Fridays. Despite rising daily at 5 a.m. to check the catches at County Down’s fishing ports, he’s chatty, cheerful and on first-name terms with customers.

Lobster, landed that morning in Kilkeel, twitch on a bed of ice. Air bubbles oozing gently from whole crabs show that they too are still alive. Mussels from Killough, King Scallops from Portavogie and a huge range of North Atlantic fish — including cod, hake, sea trout and haddock — glisten with freshness.

As two French visitors splash a dash of tabasco on their chilled oysters before downing them, Chris’s pride is obvious.

“We’re an island nation surrounded by an ocean, with the world’s best fish and its cleanest waters. We’ve wild salmon in our rivers and Lough Neagh eel and pollen. No additives or preservatives — straight out of the sea and off to the market. It’s the last thing on the planet that’s taken straight from nature.”

Raising her voice above the clamour of music and trade, Polish-born Alicia describes how she arrived in Northern Ireland as a student in 1998.After staying through the summer to pick strawberries in Armagh, “he caught my eye and I caught his. All the rest his history.”

‘He’ is her husband, Seamus Breslan. Together, they farm beside the lazily meandering Blackwater River between Armagh and Tyrone, on land first cultivated in the 17th century.

“The hedgerows are rich with heirloom apples, plums and greengages. I forage for fruit and herbs to make our Amberline syrups and preserves.”

Although its winter, their wooden tables sag beneath a cornucopia of root vegetables and brassicas, still speckled with earth and damp with Northern Irish rain. Carrots, artichokes, celeriac, beetroot, parsnips, green and purple broccoli are piled high in blue plastic crates, alongside boxes of herbs, and orange and gold nasturtium flowers.

“There’s a dawning appreciation of local produce,” says Alicia. “Restaurants, like Deane’s, approach us as growers, looking for unusual vegetables, funky tomatoes, different leaves, herbs and edible flowers. They take small amounts to start, play and experiment with, and draw up their menus seasonally. It challenges them to be creative.”

Feeding beer to cattle was County Antrim farmer, Nigel Logan’s creative response when he wanted a more tender and succulent Wagyu-style beef that ‘ordinary customers’ could afford. “We brewed buckets of stout to feed to our rare breed, shorthorn cattle,” he explains, keeping an eye on the queue of customers snaking round his stall. “The animals devoured it and the customers loved it.”

The enterprising farmer represents the fourth generation of his family to have farmed at Hillstown, near Ahoghill, but he’s the first to run a farm-shop, supplying dry-aged beef, pork from rare-breed saddleback pigs, free-range turkeys and fresh brown eggs from Black Rock hens.

“Everything we do now is geared towards the farm-shop,” he says, acknowledging his customers’ desire for greater traceability and shorter food chains.

“Northern Ireland food is very safe and we grow grass like nowhere else in the world. People arriving at our shop can watch our cattle and sheep grazing in green fields beside it.” 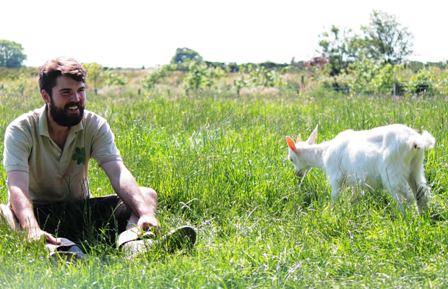 An abundance of green grass was one of the factors influencing Charlie Cole’s decision, aged just 23, to embark on goat production as a low-cost entry into innovative farming. ‘Lashed by our rain, bashed by our winds’, proclaims a poster beside a freezer filled with cuts of his Broughgammon kid goat and veal.

Four years after starting out, Charlie and his 26-year-old wife Becky are rightly proud of their thriving farm, in lush countryside a few miles inland from North Antrim’s stunning coastline. He wipes his hands after a morning’s on-site butchering and accompanies her across the farmyard to where builders are finishing the vast double barn that will soon accommodate 150 hand-reared goats. 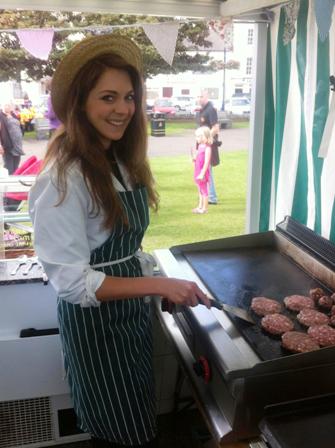 Becky, struggling to be heard above the contented bleating of dozens of frisky animals, outlines Broughgammon’s philosophy. “The last five years have seen phenomenal demand for goats’ milk products, so females are much in demand. But billy-kids are being put down at birth. We buy them and rear them till they’re eight months old. Cabrito, or kid goat meat, is up there with chicken in terms of healthiness — low calorie, low fat, high in iron and protein.”

As I step backwards to stop a kid nibbling my coat, Charlie admits to going “a bit goat crazy” since buying his first herd of thirty. “They’re ridiculously nice animals, personable and inquisitive”.

He knew he was undertaking something unheard of in that part of Northern Ireland but, with a spirit of entrepreneurship characteristic of the region’s young producers, he calculated he had little to lose.

“Seventy-five per cent of the world’s population use goat as their primary meat. We’re showing local people that billy-kids are a viable, healthy food source. We’re also giving our growing ethnic population a taste of their childhoods.”

Food doesn’t come much healthier or more ethical than this. As we wander along a mucky lane, past geese and chickens which provide the family’s eggs, Becky explains that Broughgammon rear milk- and grass-fed male dairy calves in the same ethical way, before dispatching them to meet the growing demand for free-range, rose veal.

Their success means the Coles now devote four days a week to butchery — preparing pheasant from local estates, butchering one deer a week to satisfy demand for venison, and getting orders ready for restaurants, hotels, ten farmers’ markets a month, and their ‘billy-burger’ van.

“A food revolution’s definitely underway,” says Becky. “People care about nutrition and the welfare of the animals. They’ve discovered how good local produce is and they’re celebrating it.”

Broughgammon is venturing down a totally new path but others contribute to the ‘revolution’ by breathing new life into traditional practices.

When Boston-born, Julie Hickey, showed her straight-talking father around her new dairy in the Sperrin Mountains, he suggested less than reassuringly, “If the cheese doesn’t work out, use the vat as a hot-tub.” 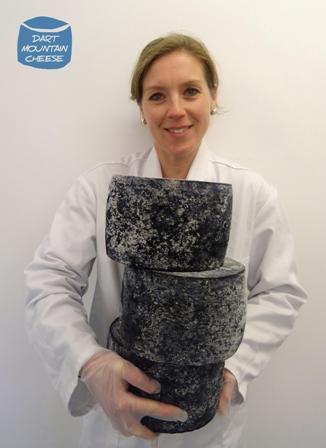 Several years later, wearing green protective coat, white rubber boots and blue hairnet, Julie proudly slides back the lid of the gleaming, 500-litre, stainless steel vat and savours the fresh, milky smell of curd. In under six months, it will be transformed into sixteen five-kilo wheels of her award-winning blue cheese.

Dart Mountain Tamnagh Foods, which Julie runs with her husband, Kevin, snuggles in a picturesque valley between the grassy, heather-covered Dart Mountain and the fast-flowing River Faughan. The names of its cheeses evoke the spirit of the landscape: Sperrin Blue; Dart Mountain Dusk; Kilcreen (a town-land nearby), and Banagher Bold, named after the family’s parish and wrapped in the colours of the local Gaelic football club. Tirkeeran – Irish for ‘dark place’ – will be released later this spring.

“There’s no greater food alchemy in the world,” Julie enthuses. “We get milk – a 100% natural product – and change it into thousands of cheeses that are unrecognizable from one another. Hard, crumbly, stinky, bloomy. I’ll just keep inventing them and I’ll never get bored.”

Nor, it seems, will her customers. Dart Mountain cheeses are steadily making their way into shops, hotels and restaurants. A range of granola she produces “to kill time while the cheeses age” is on sale in Harrod’s of London and exported to Switzerland.

Julie concedes that her father’s initial skepticism was understandable, but adds that people’s tastes have changed “unbelievably” since she and Kevin ran a restaurant ten years ago.

“Back then, huge wholesalers’ trucks delivered to everyone and you couldn’t get local products. But we’ve come on leaps and bounds and, in terms of what we can do, the sky’s the limit.”

Julie harbours ambitious hopes for food trails and agri-tourism, and wants to strengthen connections with other producers. Her Banagher Bold – Ireland’s only ale-washed cheese – is the result of a collaboration with Northbound Brewery in Derry, one of a host of emerging micro-breweries that are challenging traditional drinking habits. 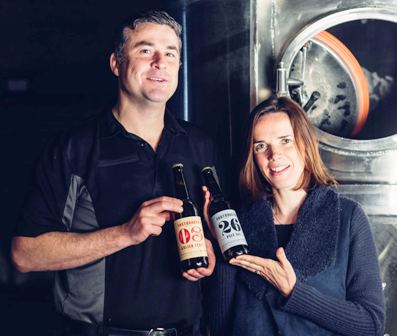 “In 2007, there might have been a dozen craft breweries on the whole island of Ireland, but now there are probably close to 100,” says Master Brewer, David Rogers, watching carefully as a pallet of his beers is loaded onto a lorry bound for Dublin. “We were trailing the rest of the world but we’re catching up now at a rate of knots.”

Scottish-born David acquired his brewing expertise while living at Bondi Beach and working in a Sydney brewery. Like the owners of the Ursa Minor bakery, he and his wife Martina returned to Northern Ireland fired up with new ideas for hand-crafted produce.

“This is beer as pure and natural as can be,” he says, standing on a viewing platform, towering over shiny, stainless-steel tanks. “Water, yeast, hops and knowledge. From the mash tun, to the hot tank, to the fermentation vessels, I brew every part of it. There’s no filtration and no pasteurisation, and it is bottled on site after a journey of only two meters.”

Northern Ireland, on the other hand, has travelled a long way and its food sector’s eyes are fixed firmly on the future. Producers and chefs who’re in the spotlight in 2016 hope they’re on the cusp of something great.

The omens look good. Tens of thousands of visitors will descend on Northern Ireland in 2019 when the British Open Golf Championship is staged at Royal Portrush, just five miles from Harry’s Shack.

“The Year of Food and Drink is just the start of it,” says Donal Doherty confidently. “It’s timed perfectly. We’ve new producers and new restaurants, and we’re ready for it.”