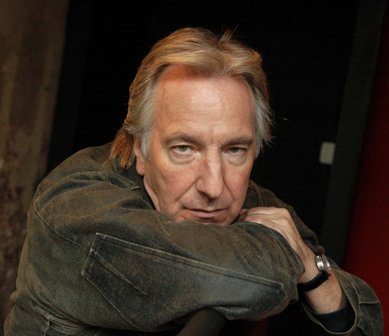 Depending on when you first encountered him, Alan Rickman was the villainous Sherriff of Nottingham Forest, the mastermind terrorist Hans Gruber in Die Hard, Russia’s notorious Rasputin, or Severus Snape, a hostile but complex half-blood wizard from Harry Potter.

Rickman’s family confirmed he died of cancer on Jan. 16, 2016 at the age of 69. His career spanned four decades on radio, television, stage and film. His death comes shortly before the release of a new film titled Eye in the Sky in which he stars with Dame Helen Mirren. His final work, as the voice of Abselom the Caterpillar, in Alice Through the Looking Glass, will be out in spring.

British actress Emma Thompson, with whom he co-starred in Sense and Sensibility and Love Actually, saw him just before he died and kissed him goodbye.

“What I remember most in this moment of painful leave-taking is his humour, intelligence, wisdom and kindness. His capacity to fell you with a look or lift you with a word,” she said in a written statement carried in the Britain’s Daily Mail.

She described him as “the ultimate ally in life, art and politics.”

“The intransigence which made him the great artist he was – his ineffable and cynical wit, the clarity with which he saw most things, including me, and the fact that he never spared me the view.”

Atlantic Magazine credited Rickman with being an actor who could “take even the blandest roles and spin them into something wonderful. But offered more to work with, he was unforgettable, portraying countless distinctive characters until his death.”

He was, according to the magazine, one of the finest stage actors of his generation, “blessed with a silky, mellifluous voice that became his trademark.”

BBC News also zeroed in on the voice, describing it as “sonorous and languid,” adding it was his calling card, “making even throw-away lines of dialogue sound thought-out and authoritative.”

Alan Sidney Patrick Rickman, of English, Irish and Welsh descent, was born to a working class family in London in 1946. The second of four children, his father died of lung cancer when he was eight years old and his mother raised the family.

“She was a tigress,” Rickman once told the BBC. “She could do anything. She had various jobs, trained in various others. She always reinvented herself.”

At school he excelled in art and drama, later attending Chelsea College of Art and Design and the Royal College of Art. He initially believed graphic design was a more sensible pursuit than acting but he eventually gave in to his passion for drama and found work with a variety of repertory companies.

He became known to British audiences on television before breaking through with the role of Vicomte de Valmont in Christopher Hampton’s a stage production of Les Liaisons Dangereuse.

The Guardian, in its original review, called him “a drawling sexual connoisseur who slips sly and inscrutable through the action like a cat who knows the way to the cream.”

His next role, as Hans Gruber in Die Hard, brought him international attention and provoked a bit of a showdown when he balked at stage directions, claiming they were inconsistent with his character. Rather than being widely branded as difficult, he came to be known as a serious, thoughtful actor.

David Heyman, producer of the Harry Potter franchise, noted to the BBC that Rickman’s sensitive portrayal of Severus Snape hinted at the character’s anguished past long before author JK Rowling revealed it in books.

“He had a real understanding of the character and now, looking back, you can see there was always more going on there – a look, an expression, a sentiment – that hint at what is to come. The shadow that he casts in these films is a huge one and the emotion he conveys is immeasurable.”

Rickman also excelled at directing, most notably the award-winning  play My Name is Rachel Corrie about the American student who was killed by an Israeli army bulldozer on the Gaza Strip. In recent years, the eight Rowling films robbed him of the time necessary for directing.

For all his successes and awards, Rickman was notably private about his family and disliked comparisons of his characters. For him, it was never so much about whether he liked a character as whether the character came across as truthful. As a rule, he brushed off questions about the nuances of acting, claiming it was too difficult to articulate.

Speaking to British Academy of Film and Television Arts last year he simply described his craft as “the act of giving yourself over to once upon a time.”