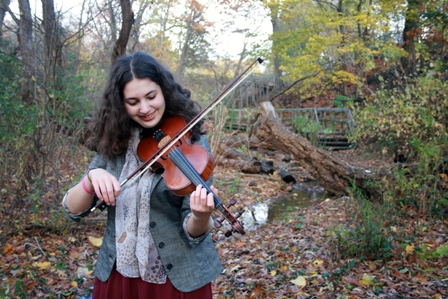 A student of music, as well as a performer, the Toronto resident can also deconstruct pieces for in-depth analysis.

Cline began studying the classical violin at the age of seven, but Cape Breton fiddling soon caught her fancy.

“I don’t have any family roots in Cape Breton but my father, musician Leigh Cline, was friends with (renowned Cape Breton musician) John Allan Cameron, who put us in touch with Sandy MacIntyre who taught me Cape Breton fiddle for years.”

She notes that her father was the director of the Mariposa Folk Festival when Cameron, MacIntyre and Winston “Scotty” Fitzgerald were hired for their first major performances outside of Cape Breton.

As a teenager, Cline attended Colaisde na Gàidhlig (The Gaelic College) in Nova Scotia for a memorable summer of practicing and playing with Cape Breton fiddlers. In 2008, she was the first Canadian to be accepted to the Meitheal School of Irish Traditional Music in Limerick.

“After attending Meitheal I fell in love with Irish music and started to play more Irish music as well as Scottish music. I was lucky enough to study with Maeve Donnelly, who has won multiple All-Ireland titles.”

“While the sound and style of Irish music differs from Cape Breton music, there are many similarities in the types of tunes played, as well as in playing techniques. I grew to have a particular interest in the music of Donegal, as the music there has a lot of Scottish influences in it.”

Cline has been combining Irish, Scottish and Cape Breton styles to create a distinctive Celtic sound of her own, but she also enjoys playing Greek and Turkish sets with her father, and the duo is in the process of compiling their first full length album.

“I work mostly with my father, who accompanies my fiddling on guitar, and because of his influence and style of playing, we play real dance-style music. We include some Balkan tunes in our sets as my father has played Greek and Turkish music for decades, as well as Celtic music. Because of this, there are some Greek violin techniques that I incorporate into my Celtic fiddle style.”

Whether it is a fiddle tune or a song with words, the key is the melody, Cline insists.

“It doesn’t necessarily have to be a complicated melody – some of my favourite songs have relatively simple melodies, but they are incredibly sing-able and have memorable lyrics.”

She admits that her inspiration is most likely to strike after spending time searching for new tunes and techniques, as well as practicing and listening. Over the past few summers she has taught fiddle at a children’s camp and been delighted to find so many children genuinely excited to learn the instrument.

Between her family background, attending an arts high school and studying music in university, Cline has had great opportunities to appreciate various forms of music, but she is always happy to see the attention generated by Celtic music.

“A lot is being done to preserve and promote Celtic culture generally, whether it is through Celtic music, dance, arts, language or other facets of Celtic culture.”

While she hopes to tour with her father in 2016, one of the highlights of her career to date has been running a session at An Sibin Pub in Toronto .

“When the pub opened in 2012, I was asked to organize and lead a session and it has been running successfully ever since. We have many musicians from different styles of Celtic music at the session, and several major Celtic artists have dropped in.”

Playing Canada Day performances in Toronto at Yonge-Dundas Square and at Mel Lastman Square is always a highlight, and Cline frequently appears at Ontario festivals such as Trenton Scottish Irish Festival and Music Niagara.