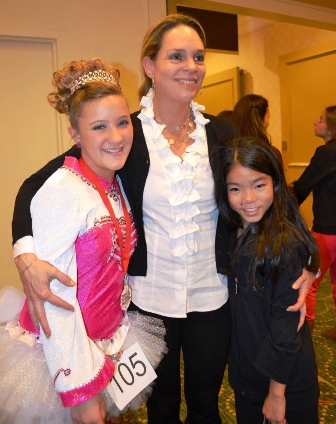 And it was Riverdance, the acclaimed Irish music and stage production, that brought Mosti to the abrupt crossroads in her career. While her love affair may have been ignited by Moya Doherty and John McColgan’s Irish musical, which premiered in Dublin in 1995, it is a passion that continues to burn vibrantly. For more than a decade, she has been teaching young and not-so-young students to step it out in Irish style. In places such as Mexico City, Tijuana and Cancun, where modern commerce, historical sites or splendid beaches beckon, it is no longer unusual to be entertained by youngsters kicking up their heels and tapping their toes to songs such as I’ll Tell Me Ma.

“I was dancing professionally and teaching ballet until I saw the Riverdance show in 2000,” explains Mosti. “I dropped the ballet career and started training as an Irish dancer until I took my exams in 2002. I was so in love with the dance I just had to bring it to Mexico, as nobody was dancing it here then.”

Enthralled by the high energy and drama of Riverdance, which put Irish dancing on an international stage and became one of the most successful dance productions in the world, Mosti began to recognize pleasing similarities with Mexico’s regional dance forms.

“Irish is such an appealing dance, practically and visually, and given the Spanish background in the Mexican people – flamenco and Spanish regional dances are based on treble steps – Irish dancing comes easily to talented Mexican dancers.”

Many aspiring Mexican dancers get their first exposure to Irish dance through video presentations of Riverdance or Lord of the Dance, another Irish musical and dance production created, choreographed and produced by world-renowned dancer Michael Flatley. What they see triggers an interest in learning, either to perform a few steps for their own satisfaction or to become a competitive Irish dancer.

Mosti points out that a show called Jarocho was choreographed by Riverdance’s Richard O’Neal, and it captures the essence of Mexican traditional dance. She also acknowledges it is possible her ethnic origins predispose her to have an appreciation of Irish dance.

“We are the only Mosti family in Mexico and my background is a mix of Italian, French, Spanish and Irish from all grandparents.”

Growing up in a family that appreciated music, she was exposed to a wide variety of styles. But because she began ballet at the age of three, classical was foremost. Her own 17-year-old daughter began Irish dance at an early age, and today is an open champion, while three of her sisters’ children were all accomplished dancers before going off to university.

Mosti estimates that she has taught more than 2,000 students over the years, and many return for lessons. Recently some of her early pupilss have opened branch studios in association with her school, Irish Dance de Mexico, helping to spread Irish dance across the country. Some of the instructors continue their regular lessons with Mosti.

“We handle traditional Irish dance, so they start with the soft shoe dances such as reels and light jigs, and then we go to the hard shoe dances starting with the treble jig, then hornpipes.”

Her own favourite dances, which are not for beginners, are non-traditional, including The Wandering Musician and The Hunt.

As well, for the past 10 years, Mosti has been organizing Feis de Mexico, an Irish dance competition which has grown to include 400 dancers performing in categories from Under 8 to adult.

“It is a large event with a high standard of competition and international judges. Dancers come from all over Mexico to compete.”

She, herself, is currently working to get her certification as an Irish dance judge.

“Irish dancing is growing, it is getting big. I have my fingers crossed on becoming a judge.”

While Mosti’s engagement with Irish culture is confined to dance, the Irish are generally well-regarded in Mexico. This is partly due to the celebrated St. Patrick’s Battalion which was part of the Mexican army that fought against a United States invasion between 1846 and 1848.