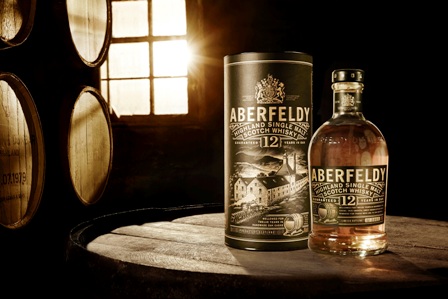 In 2014, Bacardi finally decided to get on the single malt bandwagon. Of the five single malts it produced, only Aberfeldy was well known to single malt drinkers. The famour rum company – which owns five distilleries in Scotland – then re-launched and re-branded Aberfeldy, alongside Aultmore, Craigellachie, Macduff (The Deveron) and Royal Brackla, as The Last Great Malts of Scotland.

Aberfeldy distillery was founded in 1896 in the Perthshire town of the same name. The distillery was built by brothers John Alexander and Tommy Dewar, whose family had been in the blended whisky business since 1846. The distillery was constructed near the ruins of an earlier site, Piltilie (1825-1867), in an effort to produce single malt whisky for the Dewars White Label blend. The first production took place in November of 1898 at the height of a major boom in Scotch whisky production. The distillery survived the Pattison Whisky Crash, which devastated the industry just two years later, and operated through most of the Great War.

In 1925, the distillery – and the Dewars blends – was acquired by Distillers Company Ltd. (DCL), a forerunner of Diageo, which is today the largest drinks and whisky company in the world.

Aberfeldy underwent a major upgrade and modernization in 1972, at the beginning of a new boom cycle in the scotch whisky industry. While modern facilities were created for production, including a new still house and tun room, the beautiful old stone maltings were preserved. More recently these have been converted into an informative visitor center, a lovely gift shop and good cafe.

In 1998, Diageo – who at the time owned nearly half of the active distilling capacity in Scotland – was compelled by competition authorities to divest itself of some of its distilleries and brands. As part of its downsizing, it spun off John Dewar & Sons to Bacardi. Thus, Aberfeldy, along with its four sister distilleries and the Dewars brands, were sold to Bacardi.

Only an hour’s drive north of Glasgow and Edinburgh, Aberfeldy distillery is very accessible. Just 10 minutes off the A9 highway, down a scenic mountain road, it is also near scenic Loch Tay and the tourist town of Pitlochry. The distillery’s visitor center has terrific exhibit detailing the history of the Dewars brand, and a lab where you can practice your own blending skills. Whisky pilgrims could make a day of it, combining a visit to Aberfeldy with one of a number of other nearby distilleries, including Edradour, Glenturret and Tullibardine.

Aberfeldy 16 Year – Darker and fruitier than the 12 year, with a creamy base and prominent sherry notes: dried fruits, fennel, coffee grounds, juicy orange and chocolate. $96

Aberfeldy 18 Year – This Duty Free release is similar to the 16 year old, with both American and European oak notes, but a few more years on it. £86.49 UK Duty Free

Aberfeldy 21 Year – Possibly the best value 21 year old whisky on the market right now, and the highlight of the range. It is creamy, rich and very smooth with layers of tropical fruit and decadent spices. $115