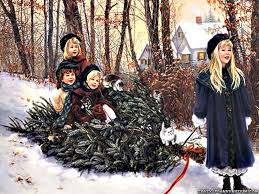 When Deirdre O’Malley looked out the window she saw chimney pots, roofs, cars and sidewalks bandaged in white fluffy snow. She was in bits trying to find a way to tell her three young children there will be no presents from Santa Claus this Christmas. She and their father had been separated for over a year. The court-ordered child support was always late or short.  Because it was Christmas, Deirdre thought he’d give her some money so their children would have a happy Christmas.  Instead, he left a message on her answering machine saying he was in Florida to celebrate Christmas and to play golf.

Here it was Christmas Eve in Buffalo, New York. Deirdre was 34 years old, and the only money she had was about 50 dollars in change. She was glad she got a turkey and all the trimmings for tomorrow’s dinner. She could hear the sounds and the aromas of Christmas in every house, except hers. There was no cleaning done or fruitcakes being baked. She had no Christmas spirit at all.

“I’ll put the cookies on Santa’s plate,” her twin sister, Caitlin, chimed in.

“Yes, we’ll go and get our tree this morning,” Deirdre said, and fixing her face into a huge smile.

When they drove into the YWCA’s parking lot, they saw that most of the good-looking trees were gone. They searched through skimpy trees with broken branches. Finally they agreed on a small, tubby fir tree that could grow tall and slim or stay short and fat.

“How much is this one?” Deirdre asked the man selling the trees.

“All the trees are now 50 per cent off the price tag. You can have the one you’re holding for five bucks.”

“We’ll take it,” she said, handing him the money.

The man helped Deirdre to get the tree into the trunk of her old station wagon.

Back at home, the children began to pull the branches into shape. Deirdre watched them playing together and a feeling of contentment came over her.

Barbara, a tenant who lived upstairs, said she would show Deirdre how to make the American Christmas cookies. About four o’clock, Deirdre had a strong urge to go to the mall. She knew she’d get the Christmas spirit there if she mingled with crowds of last-minute shoppers.  Barbara said she’d take care of the children while Deirdre went out again.

Back home in Ireland, many workers got paid on Christmas Eve and did their Christmas shopping that same day. The hustle and bustle created happy, friendly feelings as men and women rushed through the streets carrying parcels or calling out “Merry Christmas! Happy New Year!” Some shoppers would also carry a turkey or a goose under their arms.

While driving to the Boulevard Mall, Deirdre asked her guardian angel for help.

“At least we now have a turkey, a tree and we’ll make Christmas cookies.”

When she entered the mall, a store with the name Sattler’s caught her eye.  She went over to where there was a cluster of people filling out forms. Then the public address system went on and a man’s voice said:

“Good evening ladies and gentlemen. To make your Christmas the best ever, Sattler’s is inviting shoppers who don’t have a Sattler’s credit card to open one today. Yes…! You can get up to 300 dollars in instant credit. Just fill out an application. Show your driver’s license. We’ll give you a temporary card.”

Deirdre could hardly believe her ears. Three hundred dollars! She could charge up to 300 dollars! That’s 100 dollars for each child!

With her temporary card, she raced to the toy department and got trains and trucks for Kevin, a telescope and a doll that could talk for Fiona, and for Caitlin, she got a toy camera and puzzles. She bought several games and books. She rushed to the children’s clothing section and bought jeans, sweaters and socks. The PA system came on often, encouraging shoppers to get the instant credit.

“Sattler’s will close at 6 p.m. sharp tonight. Our staff can go home and prepare for their own family’s Christmas.”

With 15 minutes to go before closing, Deirdre walked fast to the women’s department and saw a beautiful red shirtwaist dress. With her blond hair and blue eyes, she looked great in red. It was not on sale, but she bought it anyway.  She also treated herself to a small bottle of Channel Number 5 French perfume. She spent a total of $295 on toys and clothes.

While driving home, Deirdre turned the radio up high and sang all the words of the Christmas Carols along with the singers. When she arrived back home, Barbara had the dough ready to make the cookies. They finished putting the lights on the tree. It did look like a Charlie Brown Christmas tree, and its pine scent seeped out into the living room.

When the children were asleep, Deirdre got the toys and clothes out of her car and she spent over an hour wrapping presents.

About five o’clock Christmas morning, Deirdre heard Kevin’s door squeak open. He went into his sisters’ room and woke them up.

“Santa Claus was here! He left bunches of toys outside our bedroom doors!” Kevin whispered.

Deirdre listened to her children’s happy sounds of animated whispering, wrapping paper being ripped and crinkled. After a while each sleepy child took one new toy from Santa’s stash and brought it back into bed. The family slept late on Christmas morning. When they awoke, all of them had the Christmas spirit and it was in every corner of the house.