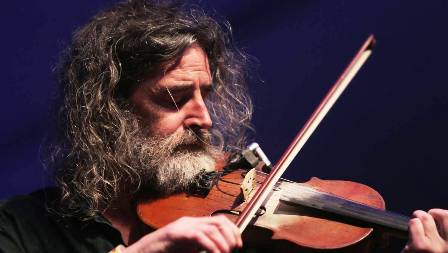 Grant picked up the fiddle at the age of five and took to the instrument immediately. His father, the renowned left-handed fiddler Aonghas Grant of Lochaber, was his first teacher. As a teenager, and under the spell of punk rock, Grant switched to the electric guitar.

“In those days, playing the fiddle was decidedly uncool,” states Shooglenifty’s webpage homage to their bandmate. “Ironically, something Angus did much to change in the next 30 years or so.”

Grant picked up his fiddle again to play in the small pubs along the west coast of the Scottish Highlands and in Edinburgh, before busking across Europe. It was a stop in Spain that inspired one of his best-known tunes, Two Fifty to Vigo. On his return to Scotland in the late 1980s, he joined friends in the punk/bluegrass combo Swamptrash. By 1990, the band had dissolved and Grant was beginning to embrace the tradition of his father’s music, soon infusing it with more contemporary influences.

“They were a rock band, with a fiddle player as a front man,” notes the band’s website, adding that their first album, Venus in Tweeds, “took the folk world by the scruff of the neck and they’ve kept shaking ever since.”

“For over 25 years Shooglenifty, with Angus as their quiet and unassuming front man, has led an exhilarating dance with their combination of trad jigs, reels and airs with deep driving grooves and haunting atmospheres,” says Neil McFayden on the website www.folkradio.co.uk. “Along the way, they inspired a new generation of musicians and earned a devoted following.”

Scotland’s The Herald described the band’s first album’s impact on the Scottish folk scene as “earth-shattering.”

“They also drew young people, especially but not exclusively in the highlands and islands, into traditional music – and Grant’s soaring, keening fiddle and his tunesmithery were a major part of the attraction.”

David Francis of Traditional Arts and Culture Scotland agreed that Shooglenifty brought something fresh to the folk scene.

“Instantly recognizable, Angus was at the very center of all that. With an unarguable fiddling pedigree, he brought a high level of musicianship and a sense of cultural rootedness which he never felt as a restriction. He was a free spirit, a great musician and his loss will be keenly felt.”

Grant composed some of Shooglenifty’s most memorable tunes, including She’s in the Attic, Nordal Rhumba, Glenfinnan Dawn and Fitzroy Crossing, the haunting closing track on the band’s most recent album.

Jim Gilchrist, writing for The Scotsman, noted the group entranced audiences from Glasgow to Australia and South Africa to Japan.

“However, Grant remained as happy playing in a pub session in Glenuig as he was in a rain forest festival in Borneo. Highland fiddle music was in his blood.”

Drummer James Mackintosh, Grant’s friend since childhood, told The Scotsman that his bandmate was a private man.

“He didn’t use a mobile phone or any modern technology. He just did his thing. He loved the west coast and he’d spend as much time up there as possible. He would just love to go and play a tune in Arisaig or Glenuig, or go out to Eigg. For Angus, everyone who played in the band just became family to him.”

Grant himself once described his band mates as brothers, “Or worse – wives.”

“The Shoogle front man was a flighty and mercurial figure,” adds the band’s website. “He lived on the breeze, loving to disappear on walkabout – or, more often, hitchabout – in the Highlands, to pop-up into far-flung bars and drop by for random visits with much-loved friends. He lived without ties or responsibility, but was devoted to his music, his family and his fellow musicians.”

Grant passed away recently at the age of 49 after a short bout with cancer.