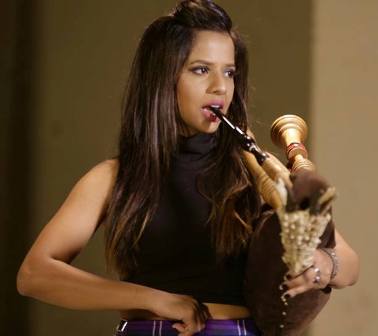 Archy J – aka The Snake Charmer, as she is known on social media channels – is getting rave reviews for her piping skills, particularly her unique takes on popular music, including songs from the Gladiator and The Walking Dead soundtracks.

The daughter of a middle class family, the attractive 25-year-old was a well-known vocalist and an accomplished acoustic guitar player before the bagpipes captured her fancy.

“What completely inspired me and caught my attention was watching the folk-metal band Eluveitie on YouTube,” she shares via email. “They had a bagpiper – I had never seen or heard anything quite like it before.”

Determined to be “as cool as” that group’s piper, J gave up fast-tracking a career in international e-commerce and financing to teach herself to play the chanter in late 2012. Within two years, she had a handle on the instrument.

“Learning to play without a teacher was no joke, and I knew I had to put in more effort and time than anyone else; practicing twice or thrice a week was simply not going to cut it for me.”

She credits strangers who responded to her e-mails and messages with guiding her through the early days of learning, when she often felt overwhelmed. Five days of instruction from Finlay MacDonald at Scotland’s National Piping Centre put polish on her basic mechanics, and she returned home ready to take the next steps.

“I was told that Mr. Finlay would be the right instructor for me, as he employs a lot of unconventional styles of playing. He understood what I wanted to do with my piping, and taught me the appropriate techniques. I have utmost respect for him.”

Currently, J plays a semi-electronic bagpipe called Redpipes – an instrument suggested to her by champion Canadian piper Jim McGillivray on a visit to Canada in 2013.

Her method, she acknowledges, is anything but traditional.

“I mostly play the chromatic style, but since I have already broken some of the traditional playing rules I might as well go all out and experiment with everything and see how it works on the bagpipes.”

She is aware that there may be those who are not sold on what she does.

“I find the bagpipes beautiful and unlike any other instrument out there. It is only a matter of presenting them in the right way by blending them with different genres or styles of music. That’s what I am heading for, and I am sure people are going to love it.”

“Love it” might be an understatement; her YouTube channel has already racked up more than 1 million views, and she is counting on the popularity of those videos – where she appears as both a solo artist and with a number of musical collaborators – to warm up audiences at home.

“Bagpipes are very new to India, and my hope is to start pulling people here toward this new sound.”

Recognition outside of her home country has been building steadily since her video version of AC/DC’s Thunderstruck went viral, grabbing global attention, and inviting interviews by BBC Radio Scotland and The Express UK.

“To be recognized like that by the foreign media was quite a pleasant surprise and gave me my first sense of real achievement,” she notes, adding the American metal band Lamb of God also publicly shared her version of one of their songs.

In addition, California-based composer Bear McCreary – whose credits include the soundtracks for Outlander, Assassin’s Creed, and The Walking Dead – recently acknowledged her work on the pipes in several of his compositions.

J admits that being raised in India means that she is not as well-versed in Celtic music as many pipers, but she is impressed with the Celtic music she has been exposed to in recent years. She considers the late Piper Duncan Gordon, of Pitlochry, Scotland, a particular inspiration.

“Also, initially, I did not know the importance and relevance of the kilt to piping and to Celtic culture, and wore it just because it looked so damn good! And people here in India are really fascinated with it as well.”