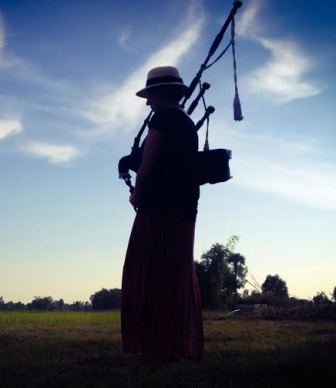 Irene Robinson is travelling 50,000 miles in 50 days across 7 continents, playing her bagpipes at 12 iconic locations to raise funds and awareness for two worthwhile causes; Julia’s House – a children’s hospice caring for children with life-limiting illnesses from diagnosis to death and beyond for the whole family – and The Royal Navy and Royal Marines Charity, which supports both serving and former members and their families. Recently she spoke with Celtic Life International.

What inspired you to start?
My piping days started when I was thirteen years old after a visit to Chessington Zoo in Surrey with my family. It was a sunny day and we stopped to look at a band of young girls marching and playing the bagpipes on the lawn outside the main colonial house. My father was extremely taken with their performance and when they had finished playing he turned to me and pronounced loudly, “Irene you are going to be a piper”. He then walked over and introduced himself to the leader of the band. They turned out to be The City of London Girl Pipers managed by Mr Roach, a proud Irishman like my father. To my surprise the band practiced at my old primary school, St Anne’s in Vauxhall, London and that is how my piping journey began.

Are they the same reasons you continue to pipe today?
Yes I still enjoy playing the pipes as much as I did when I started.

What kind of pipes do you play?
I am taking a set of McCallums Poly Acetyl pipes which they have kindly donated to me on The Challenge as they will cope with extreme temperatures. I usually play a David Naill set.

Are you a traditional piper in terms of style & sound?
Yes.

What inspired Bagpipe the World?
After volunteering for three months in Cambodia last year at a children’s school teaching English, I decided shortly after my return that I could do something bigger in terms of fundraising.

What has the response been like so far?
It was a brilliant launch day on January 10th playing on HMS Victory in the historic dockyard in Portsmouth, England. Since then The Challenge has been gathering momentum, through a live radio interview and even a mention on the television. BBC Radio Solent are planning to follow me through the journey and I understand that there may be live coverage on BBC television on my return.

Will this be an annual event?
This is a once in a lifetime undertaking for me!

From your perspective, are young people today still interested in piping?
I have a friend who is a tutor in Dorset, England and he is teaching four young people at the moment – so I’m hopeful that there will continue to be interest in the pipes amongst young people.

What are your piping plans for 2016?
I usually attend the St Patrick’s Day Parade in New York with the New York Corrections Department Pipe Band and I will do my best to make it again this year.