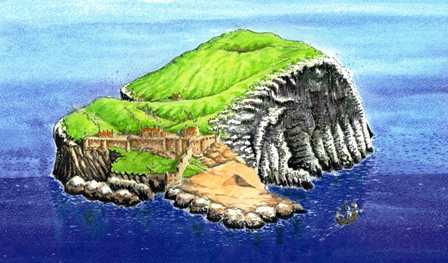 Known as the ‘Scottish Alcatraz’, the Bass Rock has held royals, ministers and a few Jacobites for good measure. The near impenetrable rock made it the perfect place for a prison.

The first known prisoner of the Bass Rock was Walter Stewart, Earl of Atholl who was King James I cousin, who was to be held there for a year until being executed for treason.

It was originally owned by the Lauder family, who were gifted the island by King Malcolm III of Scotland until Cromwell reclaimed the island as “property of the crown” during his invasion of Scotland.

Many of its first mass prisoners were Covenanters – religious and political opponents of the Stewart’s interference in the Presbyterian Church. Between 1672 and 1688, around 40 political and religious prisoners died in the dungeons.

One of the more infamous Covenanters held on the rock was Prophet Peden.

Peden was a preacher, best known for wearing a cloth mask and wig to hide his identity.

Captured in 1673, Peden was sentenced to four years’ imprisonment on the Bass. But as was the norm with unruly prisoners, he was forced into life in exile in America after his sentence. However, an American captain, in discovering he and 60 others were being banished for religious reasons, released everyone.

Peden made his way north again and divided the remaining years of his life between his own country and the north of Ireland, dying in a cave on the River Lugar.

On June 16 1691, the prison was almost deserted. Coal was brought to the island using a crane, which the soldiers had to go down to the water front to meet.

The delivery of coal that night coincided with the absence of the 50-strong garrison, as well as the castle governor, who were on the mainland. The remaining men went down to assist the collier, leaving the prison walls.

The four Jacobite men managed to overpower the rest of the guards and locked the prison gates, leaving them in charge. The captured guards were put to work, and with the help of the prisons canon, forced the soldiers outside the gates to return to the mainland with the supply boat.

At the same time, on the mainland, four Jacobite men stole a longboat loaded with provisions including a large cask of brandy, barrels of beer, butter, salt, vinegar and enough fish to keep them going for months.

The government sent troops the next morning down to the coast, to stop any more men making it to the island, while two boats were sent to circle the island to stop any approaching ships.

But it proved near impossible to stop small boats making it to the island, bringing a constant supply of provisions – and even women.

The Jacobites also raided incoming ships who were unaware of the takeover, including a Danish one, who were stripped of supplies before being sent back on their way.

News of the prison’s capture reached France, where they were supporting the Jacobite cause to restore a Catholic monarch, and they sent a few ships to deliver more supplies.

The government grew tired of the takeover, and sent two warships to deal with the growing number of rebels – but the ship’s cannons couldn’t pivot high enough to do any damage to the prison or its walls – instead, all they achieved was to supply the Jacobites with 500 more cannon balls.

Guards were set up, with warships patrolling the water continually – but nothing could be done to stop boats arriving, slipping easily beneath the protection of the fortresses cannons.

The Jacobites held the island for three years, until government forces were finally able to intercept a ship.

Lieutenant Middleton began negotiations to return ownership of the castle and an agreement was reached. The Jacobites were granted a full pardon, as well as any coconspirators. They could keep all their weapons, sell their stolen goods and leave to wherever they pleased. They were also offered transport to France, should they wish it.

The terms were accepted and the Jacobites returned the castle, facing no further consequences.

The prison remained in use for several more years until it was demolished at the beginning of the 18th century and the rock sold to Sir Hugh Dalrymple.

From then up until the First World War, the rock was let out to tenants who earned money by fishing, grazing sheep and collecting eggs.

Bass Rock is now a nature reserve, home to 10 per cent of the world’s Northern gannets.