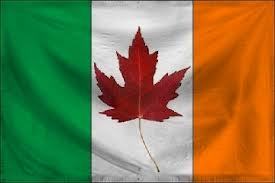 Irish Canadians are immigrants and descendants of immigrants who originated in Ireland. 1.2 million Irish immigrants arrived, 1825 to 1970, at least half of those in the period from 1831–1850. By 1867, they were the second largest ethnic group (after the French), and comprised 24% of Canada’s population. The 1931 national census counted 1,230,000 Canadians of Irish descent, half of whom lived in Ontario. About one-third were Catholic in 1931 and two-thirds Protestants.

The Irish immigrants were largely Protestant before the famine years of the 1840s, when the Catholics arrived in large numbers. However, most Catholic Irish after 1850 usually headed to the U.S., England and Australia.

The 2013 census by Statistics Canada, Canada’s Official Statistical office revealed that the Irish were the 4th largest ethnic group with 4,354,000 Canadians with full or partial Irish descent or 14% of the country’s total population. This was a large and significant increase of 531,495 since the 2001 census, which counted 3,823,000 respondents quoting Irish ethnicity.

Irish have a long and rich history in Canada dating back centuries. The first recorded Irish presence in the area of present day Canada dates from 1536, when Irish fishermen from Cork travelled to Newfoundland.

After the permanent settlement in Newfoundland by Irish in early 19th century, overwhelmingly from Waterford, increased immigration of the Irish elsewhere in Canada began in the decades following the War of 1812. Between the years 1825 to 1845, 60% of all immigrants to Canada were Irish; in 1831 alone, some 34,000 arrived in Montreal.

But the peak period of entry of the Irish to Canada in terms of sheer numbers occurred in the 1830–50 period when 624,000 arrived, or 31,000 a year; smaller numbers arrived in Newfoundland. Besides Upper Canada (Ontario), the Maritime colonies of Nova Scotia, Prince Edward Island and New Brunswick, especially Saint John, were popular destinations.

During this time, Canada was the destination of the most destitute Irish Catholics cleared from land estates and leaving the crowded docks of Liverpool, numbering in the hundreds of thousands. Passage fares to Canada were much lower than those to the United States, Australia, and New Zealand, due to such factors as distance and the use of empty, returning timber ships to transport the masses.

Today, the impact of the heavy 19th-century Irish immigration to Ontario is evident as those who report Irish extraction in the province number close to 2 million people or almost half the total Canadians who claim Irish ancestry. In 2004, March 17 was proclaimed “Irish Heritage Day” by the Ontario Legislature in recognition of the immense Irish contribution to the development of the Province. Further, Ontario is home to the only Gaeltacht or “Irish language speaking area” outside of Ireland, as is recognized by the Irish government.

With the downturn of Ireland’s economy in 2010, Irish people are again coming to Canada looking for work. Some are coming on work and travel visas.