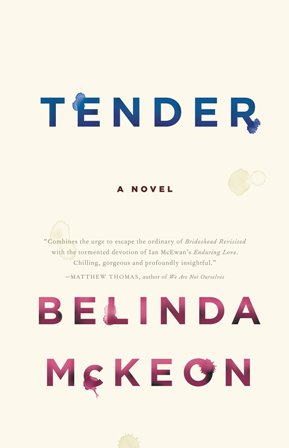 Over 15 years ago, Irish author Belinda McKeon put pen to paper and began what would eventually become her second novel, Tender.

“I think it was too complex to write about at that stage, for me – I was too young,” Belinda McKeon shares over the phone. “I didn’t do anything more than some brief sketches, and didn’t think about it for a long time.” ­­­­

Mckeon’s first novel, Solace, was published in 2011.  The bittersweet love story not only won the 2011 Faber Prize, but was also voted Irish Book of the Year. In addition, Solace was shortlisted for both the James Tait Black Memorial Prize and the Kerry Group Prize.

It wasn’t until after Solace reached completion that McKeon reached back to her other narrative. The recently released Tender tells the tale of an intense friendship between two characters, Catherine and James.

“It’s the kind of friendship you can only really have in your late teens, or early 20s,” shares the scribe. “It’s about that time in life when two people connect and find something in each other. At first, it looks like that’s going to be a very happy and fulfilling experience for both the characters…but, for various reasons, it becomes more complicated and the friendship becomes ultimately quite obsessive.”

Set in Dublin during the late 1990s, the plot takes place not long after homosexuality was finally decriminalized in Ireland. The protagonist, James, is gay. And though Catherine tries to be supportive, her internal prejudices become an issue between them.

“She’s actually inadvertently trying to hide his sexuality rather than be open about it,” notes McKeon, adding that while those longstanding biases still exist in present-day Ireland, James and Catherine were part of the first generation to come-out and “come of age.”

“Obviously, the shadow of decades of intense oppression and silencing is still hanging very heavily over them.”

McKeon based the work on her own personal experiences. She stressed that while the “spark” of the story was autobiographical, the book is by no means a memoir.

“The novel, as it evolved, became a world of its own. That’s what I do – I spend years in the company of my characters and try to follow them wherever their story goes.”

Bringing aspects of her life into a fictitious plot, she explains, was an “irresistible challenge.”

“I hadn’t really read about that kind of relationship. It was such an intensely powerful experience for me, however, that I knew it needed to be written about.”

Originally from County Longford in the Irish midlands, McKeon also drew upon the lush landscape of her homeland for inspiration.

“I think when you’re from a place, it arises naturally in your work,” she muses.

At 17, she left the midlands to go to University in Dublin. “That place is just in my bones,” she explains, quick to note that it isn’t really something she consciously chooses to do.

For the last decade, she has been living in New York City.

“I suppose that after heading on to 11 years here, this place is starting to get in there as well. More and more of my work presents itself to me as being in New York. It’s only been in the last year or so – when I sit down to write fiction – that the city will naturally and organically surface as a setting.”

McKeon says that the subconscious is where her writing comes from.

“I do try not to push those decisions – not to force, but to let them arise organically.”

In addition to being a novelist, she is an essayist and short story writer. Her work has appeared in the New York Times, the Irish Times and the Guardian. This year, she will publish short stories in Granta and The Singing Fly literary journals.

McKeon is also working on a play commissioned by the Abbey Theatre in Dublin. She has started work on a third novel as well, but it is still in the “murky, long-hand dreaming phase.”

“My process is generally of immersion and of drafting – it is a lengthy period of experimentation. And that shaping part will last as long as it needs to last.”