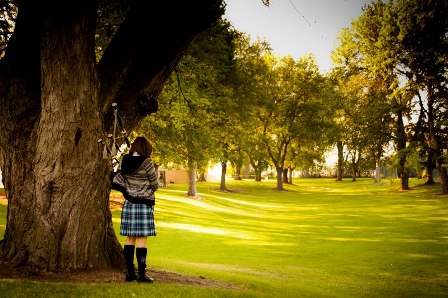 Celts of all sorts will connect in Hamilton, Montana this coming weekend for the annual Bitterroot Celtic Games and Gathering. Recently we spoke with Laura Reichart of the Bitterroot Celtic Society about what attendees can expect.

What are your own roots?
I am part German (Surname Schau on my Father’s side) and part Irish & Scots. My Irish ancestors on my Mother’s side (surname Conyngham) I have traced further back to the Scots that settled County Donegal Ireland during the Ulster Plantation era. They made their way south to Cork over the years and eventually immigrated to America in the 1800’s. I am currently a member of Clan Cunningham international.

When and why did you get involved with the Festival?
I volunteered one summer to help out selling T-shirts and I did such a good job, they won’t let me leave! Seriously; I was so thoroughly impressed and moved by what I saw and experienced, I knew right then and there I had to be further involved in the event. I tracked down one of the chairpersons at the time, joined the Bitterroot Celtic Society, started attending meetings and the rest is history! I am currently a board member and the Secretary of the Bitterroot Celtic Society.

What are your roles and responsibilities there?
I still sell T-shirts! There is a group of about 15 of us that organize the Bitterroot Celtic Games and Gathering. Though we all have numerous little tasks, my main committees are the merchandise tent, organizing the Scotch and Whiskey tastings, helping with the sponsorships and advertising, and I assist with the Facebook and website traffic.

What are the challenges involved?
The biggest challenge we have is being a small town in Montana.  Unlike some of our neighbors in Spokane, Boise, & even close by in Missoula- we don’t have a big pool of sponsors available. Being a non-profit, we rely on fundraisers and sponsors in order to put on the BCGG every year. Plus, unlike the major events on the East and West coast, most Pipers & Drummers, Athletes and Dancers have further distances to travel to compete in our event and the expense to do so is a deterrent for some.  Booking bands can be a challenge, there is only about 5 in the whole state to draw from and have pretty busy summer schedules. At the same time being a small town in Montana is also one of the best things about our event! It’s not held in open field at a fairground, or on a hot paved street, we are blessed with being able to use the historic Daly Mansion grounds under the 100-year-old oak trees with breathtaking views of the Bitterroot and Sapphire Mountains.  Usually once competitors do come, they are hooked, and come back year after year.

What are the rewards?
Simply put it is seeing the enjoyment of the attendees, the comradery of the athletes, the jocularity and bond of the clans and having the chance to have a pint with your friends. More sincerely, witnessing people participate in and experience the traditions of their ancestors and the seeing pride involved is extremely fulfilling.

Why is it an important event for your community?
It’s important in 2 different ways, one of course is bringing people to the Bitterroot Valley here in Montana is a great financial boost to the community. Every hotel, gas station, and restaurant benefits from the influx of people in the valley. More importantly is the further education and participation in of great Celtic Heritage in Montana. In the 1800’s, the many copper, silver, and gold mines in the area brought a huge wave of miners and settlers to out west, with a substantial about being Irish. Montana has a rich Celtic history with the most known area being Butte, Montana. The Daly Mansion, where are event is held, was one of Marcus Daly’s homes, he being one of the famous “Copper Kings” and an Irishman himself. The University of Montana in Missoula (45 minutes North of Hamilton) has a great Irish Studies program and also a boasts a Hurling team. It’s important for the community to know their roots and know the area’s history and pioneers.

Who traditionally attends the festival?
The largest group being from the Pacific North West, Wyoming, Canada (BC & AB), and of course Montana! Our age demographic is pretty widespread due to the events we hold. There is both traditional and also more ‘rock’ Celtic music. The highland games are for all ages including a kid’s competition. We have Scotch, Mead, and Whiskey tastings for the more adventurous and dancing and herding demonstrations for the more spectator type. Of course there is food and vendors covering a wide range for all.

What can they expect this year?
Along our usual events, Highland Games, dancing, music, tastings, food, vendors, etc., we are also holding a few more “hands on” events. Elizabeth Coyle, world renown instructor and judge, will be putting on instructional Highland Dance work workshopson Sunday and will also be assisting with our Ceilidh Saturday evening. Also on Sunday, attendees can jump in and be a part of a Skillet Toss for the lassies, a Bonnie Knees contest for the lads, and also a Tug o’ War and a Beards ‘n Braids contest for all. We also have two new demonstrations going on both days; Dog Herding, and an instructionalof Hurling, Ireland’s national sport.

How has this event evolved over the years?
We’ve learned from our mistakes on what works and what doesn’t and have grown from there. We’ve learned that people don’t what to be a constant spectator, but want to jump in and be a part of the action and experience. We have evolved into a cultural event people can be involved in, not just be an observer. We try to add or change something every year to keep it an event to keep people coming back time and again for the experiences.

Will you remain involved with the event in the years ahead?
Yes, until my husband Hal can’t take it anymore! He doesn’t see much of me during the month of August, but he and our kids have always been supportive and will chip in and help when needed. (Hal especially likes to help monitor the beer quality during the Gathering) As long as I throw a big Oktoberfest at our house every year and recognize the German sideof our family, he said he’s willing to let the other 11 months be Celtic.  The kids love it and our proud of my involvement and I see myself doing this for many, many, more years.

How else are you involved with the Celtic community there?
Our Bitterroot Celtic Society also puts on a St. Andrew’s Day potluck, A Burn’s Night formal dinner, A St. Patrick’s Day brunch, we try to get together at a local pub every Tartan Day, you will usually find us at every parade or local event when possible, plus we have publication in our local newspaper called the Celtic Corner offering monthly educational tidbits.

Is enough being done to preserve and promote the Celtic culture generally?
I do see a change happening and people becoming more interested in their roots and ancestry, especially here out west. Where I grew up in Pennsylvania the different cultural traditions were more preserved and celebrated. As pioneers moved west and cultures become more combined, a lot of that became lost. What we, The Bitteroot Celtic Society, are doing, what the Montana Gaelic Society in Butte is doing, along with those groups in Spokane, Denver, & Edmonton, are doing is rekindling the Celtic traditions, and educating the public with the hopes they will continue to be passed on for further generations.

What can we be doing better?
Education and Exposure. Celtic Life International Magazine is a great example of that! Crafts, recipes, stories, music & dance are all things if not continued, that will get lost with time.  The more events and publications offered to the public will keep interest high and the Celtic culture alive.