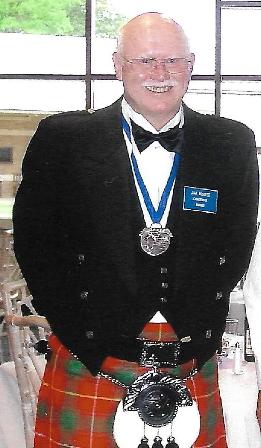 Celts of all ages will gather in Georgia this weekend for the annual Blairsville Scottish Festival & Highland Games. Recently we spoke with festival coordinator James P. McAfee about what attendees can expect this weekend.

What is your own ethnicity?
I am of the Scottish clan MacFie whose ancestral home is the Isle of Colonsay off the western coast of Scotland.

When and why did you get involved with the Festival?
I was one of the original committee members in 2002 when our local Chamber of Commerce was searching for an event to bring visitors to our area. Blairsville Scottish Festival & Highland Games was created in 2004 by the CoC to expand tourism and expand recognition of the Scottish culture in the mountains of North Georgia.  Many long-time families in this area have Scots-Irish roots. We are also fortunate to have a most beautiful Meeks Park in Blairsville to hold our events.

What are your roles and responsibilities there?
I was the Chairman of the Festival & Games for first ten years, and have been the festival coordinator for the past three years.

Why is it an important event for your community?
It brings thousands of visitors to Blairsville which in turn boosts the local economy.  It has also created interest among locals about tracing their own genealogy.

Who traditionally attends the Festival?
We have people from all over Georgia and the Southeastern states, but also from Canada and Great Britain.

How has the event evolved through the years?
The Chamber of Commerce continues to support BSFHG, but we are now a non-profit organization that puts on our own festival and games. The number of Clans and Societies in 2004 was 36 but we have had as many as 48 participating some years since. The number of Heavy Athletics competitors has steadily increased over the years. The numbers of Vendors who want to come has increased greatly but we limit them to Scottish or Celtic wares. We added a Golf Tournament prior to the weekend of festival and games. The number of local volunteers has been very good and we have good support throughout the community and from local government.

Will you remain involved in the years ahead?
Yes, in some capacity.  It is a project very close to my heart.

How else are you involved with the Celtic community there?
I attend other Scottish festivals in Southeast U.S., Burns Night Dinners, and participate in local parades and events representing BSFHG. Btw, we have been recognized by Georgia is one of the premier Music Festivals in the state.  2016 is designated the ‘Year of Georgia Music’ by the Department of Economic Development Tourism Division.  We are being featured in the ‘Georgia Travel Guide’ Magazine, getting special attention on their website and were honored at their Tourism, Hospitality and Arts Day at the Georgia Capitol.