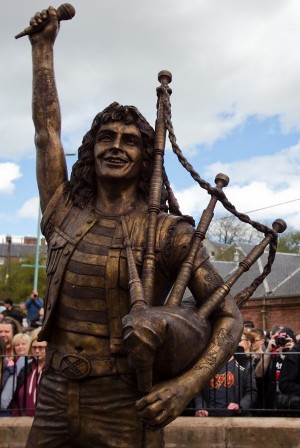 A few years back, when a friend asked me to play the bagpipes in a concert marking the 15th anniversary of Neutral Milk Hotel’s In the Aeroplane Over the Sea, I was thrilled.

In my experience, most people see bagpipe music as fitting for only two types of occasions: weddings and funerals. So it was heartening to be asked to use the instrument to help recreate that defining work of late-1990s hipster quintessence. But there was one problem. “Those aren’t my kind of bagpipes,” I told my friend. I tried to explain to him how the album features uilleann pipes, or Irish pipes, which look and sound very different from their more recognizable Scottish cousins, and also tune to a different key. But my friend waved my words aside. “We just need them for the noise,” he said.

With his casual remark, my friend inadvertently made a profound point about the instrument: The history of the bagpipes’ inclusion in rock music is, in many ways, a history of noise. Dozens of kinds of bagpipes exist throughout the world, but it’s the loud Scottish variety that are prominent in popular culture and that many associate with an iconic kind of racket. Scottish bagpipes are the noisiest un-amplified instrument on earth: A single set of pipes produces between 95 and 110 decibels of sound, putting them closer to a jackhammer (95 decibels) than to a piano (60 to 70 decibels).

Unlike with other instruments, this volume range is static, making the noisiness of the Scottish bagpipes both very public and impossible to ignore. The bagpipes don’t simply request your attention – they hold it hostage, which is why they work for ceremonial events like weddings and funerals. It’s also why they’ve historically worked so well with rock music. AC/DC’s first big hit, “Long Way to the Top,” notably used bagpipes during the era of its frontman Bon Scott, whose birthday is still celebrated in Scotland every year. In addition to being spectacularly anarchic-sounding, bagpipes have long been part of a tradition of protest – one that’s perfectly in line with the disruptive ethos rock was founded on.

For decades, rock musicians have been using bagpipe noise to amplify political messages in their work. Sometimes, this artistic choice works on two levels: First, there’s the visceral impact of the instrument’s unique sound, and second, there’s the bagpipes’ more subversive history of being associated with protest. Take, for example, Eric Burdon and The Animals’ 1968 hit “Sky Pilot,” which includes a full 60 seconds of Scottish bagpipes. The single was released in January of 1968, during a time that also marked the launch of the Tet Offensive and the escalation of the Vietnam War. In order to include pipes on “Sky Pilot,” Burdon covertly recorded a practice session of The Royal Scots Dragoon Guards pipe band—one of many groups that retains its links to British military units today. But the song the pipe band was playing was “All the Blue Bonnets Are Over the Border,” a tune linked with the Scottish Jacobite rebellion. The Jacobites were members of a Scottish rebel militia that rose against British forces in 1745, and historians commonly cite their resulting defeat as the end of the Scottish clan system and of traditional Gaelic culture in general.

The Animals’ inclusion of the pipes on “Sky Pilot” speaks to the way the instrument has been historically used to critique colonialist enterprises, in spite of its contemporary ties to those very enterprises. But so far as the use of bagpipes in rock music is concerned, “Sky Pilot” constitutes more of an exception than a rule. The song stands alone in permitting the bagpipes to function as an instrument, rather than simply as noise or backdrop. In “All Is One,” the final track on The Animals’ album The Twain Shall Meet, the bagpipes appear again, but this time as part of a discordant soundscape that also contains sitar (another instrument summoning histories of colonial oppression), electric bass, and drums.

Most rock records, if they use bagpipes at all, tend to downplay the instrument. The result is that people hear chaos in these recordings without really recognizing the bagpipes. The Patti Smith Group’s 1978 album Easter is one such record. I listened to it for years before I even noticed the bagpipes, which appear amongst the din of the title track. The bagpipes in “Easter” sound a lot like the pipes in The Animals’ “All is One” and, for that matter, like the uilleann pipes in Neutral Milk Hotel’s “Holland, 1945.” In these songs, bagpipes form but one part of a many-layered cacophony, and so are downplayed to the point of inconspicuousness. Which prompts a question: Why include them at all?

Easter is probably best remembered as the album that finally got Patti Smith on the radio. Smith’s recording of “Because the Night,” which she co-wrote with her fellow New Jerseyan Bruce Springsteen, was a Top-20 hit. But the rest of Easter stays true to the kind of anti-authoritarian critique that has made Smith a central figure in punk rock. The bagpipes, which surface at the tail end of the very last track, cap off a record in which Smith rails against social sanction, proclaiming that “outside of society / that’s where I want to be.” And at the close of the title track “Easter,” the bagpipes sound a final, rebellious note against a wall of church bells and organ, symbols of institutionalized religion. The resulting dissonance is intentional on Smith’s part: The bagpipes can only play in one key, B-flat, whereas Smith’s “Easter” is in the key of C. That there’s a whole step of interval separation between Smith’s guitar and the bagpipes amounts to pure sacrilege in the eyes of music theory.

In this way, the bagpipes have earned a reputation for being impolite. The B-flat key setting means that they just don’t play nice with other instruments, and, with their range limited to only nine notes, that key setting is not negotiable. This is why AC/DC, on what is probably the most famous rock single featuring bagpipes, opts to meet the instrument on its own terms. 1975’s “Long Way to the Top” was written and recorded in the key of B-flat to accommodate Bon Scott’s bagpipe breakdown, which appears mid-song and features a kind of “call and response” between the pipes and the guitar.

Scott, being Scottish-born and Australian-bred, had grown up playing in Scottish pipe bands (though as a drummer), and his inexpert performance on the pipes forms the core of “Long Way to the Top.” In the bagpipe world, the lawnmower-like entrance of the bagpipes’ drones would mark the player as an amateur, but this song seems engineered to complement Scott’s vocals. After all, we’re talking about a track that celebrates the virtues of the hard-rock lifestyle in all its demented, self-destructive glory. To commemorate Scott, his hometown of Kirriemuir in Scotland erected a statue of him this year—grinning widely, with a set of bagpipes tucked under his left arm.

The bagpipes have earned a reputation for being impolite.

Renegade aesthetics also prove par for the course with Tom Waits, a singer who has staked his career on probing the boundaries of musical acceptability. Scottish bagpipes crop up halfway through Waits’ album Swordfishtrombones (1983), where they seem to ooze out of a sonic blackness and then to loop and overlap, the result of double-tracking. Here, as elsewhere in rock history, a bagpipe intro sets the tone for the song which, in the case of “Town with No Cheer,” is about a small Australian town that has run out of alcohol. Waits, though, has admitted his frustrations about working with the instrument. “It’s hard to play with a bagpipe player,” he explained in a 1983 interview with Rock Bill Magazine. “It’s like an exotic bird.”

It’s fitting that rock music has repeatedly embraced the “exotic” qualities of the bagpipes in spite of the practical difficulties involved. This pattern suggests a natural affinity between the instrument and the genre. “True” bagpipe music—or piobaireachd, as it’s called in Gaelic—also has a history of defying aesthetic norms in the service of political subversion. Piobaireachd music descends from an oral tradition and so doesn’t conform to standard musical time signatures or systems of notation. In this way, it pushes against the comparatively more modern, institutionalized reputation of the bagpipes, the one that includes military pageants and St. Patrick’s Day parades.

The piobaireachd tradition fell into decline at the end of the 18th century following the Jacobite defeat but, recently, it has been enjoying a revival, as has Gaelic culture more generally. This leads one to wonder if Patti Smith and her ilk saw something in the bagpipes that even pipers themselves had, for years, been encouraged to forget.

“Listening to music,” observes the French theorist Jacques Attali, “is listening to all noise, realizing that its appropriation and control is a reflection of power, that it is essentially political.” The bagpipes speak the language of power in its many forms; that’s why even mainstream figures like Rod Stewart and Paul McCartney have found a use for them in their music. But the history of the instrument means that, with regards to rock, they are still most at home among the Patti Smiths and Tom Waits of the world—that is, among those branches of culture that seek to buck the status quo and give it a swift kick in the ear.