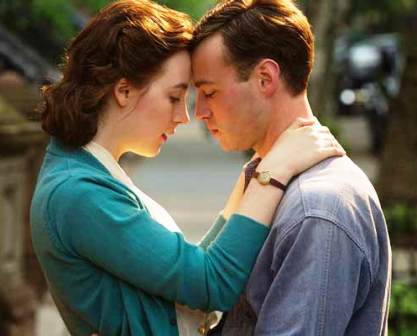 A new Irish film, John Crowley’s Brooklyn, is up for three gongs at the Academy Awards next week. Brooklyn is in the running for Best Picture, Best Actress (New York born Saoirse Ronan) and Best Adapted Screenplay (based on Colm Tóibín’s novel). Already a runaway box office hit in North America, Brooklyn’s chance to consolidate that commercial success with critical accolades in LA next month is very real.

Set in the 1950s, the film centers on the journey of Eilis Lacey, who hails from Tóibín’s hometown and oft-used fictional setting, Enniscorthy. Lacey gets an opportunity, with the help of a parish priest, to immigrate to Brooklyn. The stimulating but desperately lonely experience of being an Irish emigrant provides the dramatic context for the film.

Yet this film is so much more than an Irish-American story: this is Brooklyn as metaphor; it is Kearny NJ, it is Boston’s Southie, it is any part of the urban United States where emigrants arrived and started to assert themselves, to jostle for position and to realize that becoming American comes with a painful severance from  home. However wrenching the yearning for one’s original home, however strong the sense of identification with it or raw the homesickness for it, reversing the decision of transatlantic emigration in the mid 20th Century was hugely problematic and often impossible.

The film weaves into the story the rivalry and spite between ethnicities then streaming into the United States, and how romantic love helped to transcend it. Lacey falls for an Italian man and, invited to her new boyfriend’s family’s house for dinner, she has to negotiate her otherness. That gets trickier, however, when a younger brother pipes up helpfully: “I should say that we don’t like Irish people”.

Facing life’s inevitabilities provides this film with its plot points:    the loss of Lacey’s beloved sister, Rose, plunges her into self-doubt about where she can make her life. She does return to Ireland where, to vex things further, a man in Wexford vies for her affections, while her boyfriend back in Brooklyn keeps writing letters without receiving a reply. Watching this film I recalled again and again a statement that Gabriel Byrne made in interview, in June 2008: “life is about the acceptance of loss.” Byrne, a Dublin man, transposed to New York and apt to meditate on the consequences of that life decision, could have had a part in this film?

So much of the tapestry of emigration is captured here that to isolate one of the film’s strengths alone is invidious. Still, the portrayal of Ireland, deserves especial credit. So often in period dramas, a soppy unreality of the place mars a film’s ability to capture its audience. Not so here. The author, Colm Tóibín, had a flag-waving reaction to the film’s setting and design: “There’s also an authenticity about it. Often an Irish film is just made for the global market, and the only place it cannot be shown is Ireland, because we just go, ‘It’s not like that here’. This film was shown in my home town, where I am right now, Enniscorthy, last night. It was shown to two audiences of 200, and not one person said that”.

The myth of Brooklyn for the Irish has evolved since the 1950s, and there are more novels and films where this came from. For instance, in the 1970s and 1980s Irish bars in Brooklyn were the destinations of choice for many Irish emigrants employed in stuffy corporate jobs in Manhattan on Friday nights. They found that, as with home so too with Brooklyn, there were constraints and pressures of tribal identity: the mandatory purchase of the An Phoblacht newspaperin Irish bars being one such pressure, and the assumption that accompanied it, that to be present at the bar was to be a fellow-traveller in the armed struggle in Northern Ireland. Today, despite Brooklyn’s having been brilliantly appropriated by young people seeking an alternative life, the place remains abuzz with Irishness. The last time I stopped into a bar in Brooklyn I met a Donegal native and ended speaking to him in Gaoth Dobhair Irish with him for half the night.

Despite the much deserved praise for this story, I still think that Colm Tóibín’s greatest fiction featured a man who traversed the Atlantic, going the other way: The Master, published in 2004, details the novelist Henry James’ sojourn in Europe which had such an effect on him and the development of his writing. And James, as Tóibín traces in that novel, had Cavan ancestry.

Back in November 2014, this column reviewed John Michael McDonagh’s film, Calvary,and lamented that McDonagh saw fit in the promo for the film to state in an interview: “I’m not a fan of Irish movies, I don’t find them to be that technically accomplished and I don’t find them that intelligent… So I’m trying to get away from the description of the movie as an Irish film in a way”. Not McDonagh’s finest hour (and in any case he should be judged on his work more than his fulminations). But the point he made was quite unfair and untrue. This film, which could potentially garner several Oscar awards, is an eloquent counterargument. Those nominated, and those who supported them throughout, richly deserve all the plaudits they may receive.