Catching Up with Ewan McGregor 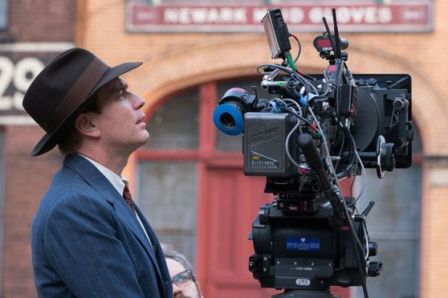 Since we least spoke with Ewan McGregor, the Scottish actor has been busy plying his trade and directing his first feature film, American Pastoral.

American Pastoral tells of a family living in America in the boom years that followed the end of World War Two.

Its hero is one Seymour “The Swede” Levov, a high-school athlete and all-round golden boy who marries a beauty queen and sets up home with her in rural New Jersey.

The couple, who are soon joined by a daughter called Merry, appear to be living the American dream. But cracks appear when Merry grows up to be a teenage radical fiercely opposed to the Vietnam War.

From here the film – based on Philip Roth’s Pulitzer Prize-winning novel – takes a violent turn that leaves the illusions that underpin both The Swede’s life and that of his wife Dawn in tattered disarray.

With its detailed focus on the profound changes that rocked American life in the latter half of the 20th Century, Roth’s novel offers formidable challenges to any film-maker who might choose to adapt it.

One might well wonder, then, why the Perth-born, Crieff-raised McGregor picked the project for his feature directorial debut.

“It sort of chose me in a way,” says the actor, who also stars in the film alongside Jennifer Connelly, who plays Dawn, Dakota Fanning, who is the grown-up Merry, and David Strathairn as the story’s narrator.

“I wasn’t asked to do it, I asked to do it. I wanted to play The Swede, and when I felt the opportunity might be slipping away I suggested myself as the director.”

McGregor was attached to the project for some years before the director’s chair became vacant – long enough, he says, to feel he was up to filling it.

It was, says Jennifer Connelly, just what the film needed. “Ewan was very bold and confident in the choices he made,” she declares. “He clearly has a lot of experience on film sets and felt very much at home.

“Everyone loved working with Ewan. He’s gracious, kind and supportive and he collaborates with the cast and crew in a very meaningful way.

“I was attached to the film many years ago in a different iteration and I was very excited when it all came back together.”

Having spent more than two decades as an actor, McGregor is indeed no stranger to film sets – or to directing, having previously made a short film, Bone, in 1999.

“I’ve been on sets for 25 years and I’ve learned what works and what doesn’t work for me,” he says. “I didn’t want to mirror anybody, but I thought I could only direct in the way I like to be directed.”

McGregor, meanwhile, only has to bring up the example of frequent collaborator Danny Boyle to bat away suggestions that, as a Scot, he might be in any way unsuitable to film such an all-American story.

“Danny’s a northerner and he made Trainspotting, one of the most Scottish films of all time!” he laughs.

“I don’t think nationality should matter really. As artists, it doesn’t define or confine us.”

‘I regret falling out with Boyle’

The mention of Trainspotting is a timely one, as McGregor recently reteamed with Boyle and the rest of the film’s cast to shoot a long-awaited sequel.

The actor says he enjoyed working once more with the Oscar-winning director, with whom he clashed over 2000 film The Beach.

Having made three films with Boyle – Shallow Grave, Trainspotting and A Life Less Ordinary – McGregor had hoped to be cast as The Beach’s lead, but was passed over in favour of Leonardo DiCaprio.

“Danny and I did have a falling out and we didn’t have any interaction for many years, which I regret,” McGregor admits.

“But it was great to be back with him and we totally picked up where we left off.”

T2: Trainspotting is one of a number of films the 45-year-old has in the can or in the works, with others including Disney’s live-action remake of Beauty and the Beast.

Ewan will be heard with a French accent as Lumiere, the talking candlestick voiced by the late Jerry Orbach in the film’s 1991 animated predecessor.

In the long term, though, a return to television may be on the cards – starting with the third series of Fargo, in which he will portray twin brothers Emmit and Ray Stussy.

It was television, of course, where the actor got his big break, playing a singing interpreter in the Dennis Potter drama Lipstick On Your Collar.

After Trainspotting, McGregor went on to appear in such big-budget productions as Moulin Rouge!, The Island and George Lucas’s Star Wars prequels.

More often than not, though, he has been seen in movies like American Pastoral – modestly-budgeted, adult-themed dramas, which he says are increasingly at risk in today’s blockbuster-dominated marketplace.

“The mid-budget, character-based drama in which I mainly lived is the area that seems to have taken the biggest kicking of late,” he sighs.

“That sort of world is seeping more into television. To get an opportunity to play this kind of drama on film is sadly getting rarer and rarer.”

For Connelly, American Pastoral offered the chance to tell “the story of a family who seem to have everything going their way, and then everything gets derailed”.

“I thought the story was very compelling, and I was also interested in the larger philosophical questions it raises,” she says.

How the film will fare at the box office, or during the upcoming film awards season, remains to be seen. As far as McGregor is concerned, though, the film is everything he hoped for.

“There are always moments here or there, but when I watched the final version I felt it was the film I wanted to make,” he says.

“I was never compromised or forced to cut a scene I liked. What you see is my intention.”