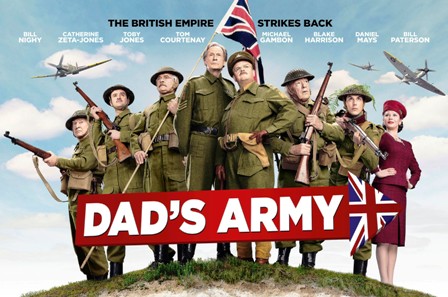 Catherine Zeta-Jones was looking stunning on the red carpet in London’s Leicester Square for the recent world premiere of her new film, Dad’s Army. Despite the wet and windy weather in the capital, the Hollywood star oozed glamour in a plunging blue dress that was split to the thigh. The Welsh actress was then joined on the red carpet by fellow stars of the film, including Sir Michael Gambon, Blake Harrison and Toby Jones.

Dad’s Army is directed by Oliver Parker and based on the 1970s TV series which was set in 1944 as World War II reached its climax. Zeta-Jones plays a journalist, Rose Winters, who arrives in Walmington-on-Sea to write an article about the Home Guard.

Speaking on the red carpet about her latest film, the thespian noted “It was so much fun. It’s great to be a part of this one. It’s great to have something that’s literally so dear to my heart. It’s an homage to the original series, but it has its own thing going on as well.”

The mother-of-two also spoke about glamming up ‘40s fashion for her role, what it was like filming back in the UK, what her family thinks of the movie and more.

Welcome home Catherine.
My dress is soaking! Thank you. It’s nice to be here. When the water seeps up your dress you know you’re home you know?

Well you look absolutely beautiful!
Thank you so much.

Sorry the weather couldn’t be better for you.
I know, well it could be snow I guess. I did come in especially for the premiere from New York. So I got in ahead of time before that big storm. I didn’t want to miss this night at all. So I came in on Friday, and I’ve had a lovely weekend with my family here.

You must be proud of this movie.
It’s great to be a part of this one. It’s great to have something that’s literally so dear to my heart. It reminds me of my great childhood and I really did have a great childhood, and Saturday nights were watching the show. My family is the kind of family, and I’m sure there’s many out there, that can recite scenes verbatim. My memories are just wonderful, warm and nostalgic – and so it has a really, wonderful tender place in my heart. So when Oliver (Parker) asked me to do it, I had to do it. So I was really happy to be a part of it with a great bunch of actors.

It must have been a fun movie to make.
It was. It was so much fun. It was everything and more than I wanted it to be. To be with this calibre of actors, you know they know their lines, they know what to do, they’re going to have fun and they are professionals down to the wire. And it was just wonderful. I wanted to do more. They shot my scenes pretty much altogether so I had finished and was like, ‘Can you fit me into anything else?’

And did the boys behave themselves on set and look after you?
They were naughty, flirting with me and I loved every minute. Ha. No, it was wonderful. They were so welcoming and I would just sit in the make-up chair with them and listen to their stories and their banter. It was hilarious.

Blake Harrison said he ate a lot of mints before kissing you on screen. Did you put him at ease?
Yeah, it was such a funny scene that we wasted half the day laughing through takes unfortunately, to my director’s horror. Because we were up against the clock from the moment we started shooting, so yeah.

Tell us about your character.
I play a journalist, Rose Winters, who is doing an article on the Home Guard for some lady magazine or something of that nature. And she goes into Walmington-on-Sea and really creates havoc.

It’s a very glamorous role – did you enjoy the make-up and outfits?
Yeah it was. I got to wear all the lovely ‘40s cut suits, I love that fashion era. It was wonderful.

Rose is a new character that we haven’t seen in the original. Did you feel like that was an advantage because you didn’t have boots to fill?
For sure, I didn’t have any comparison, of course yeah. So it was an easy out for me in that way. I probably didn’t have so much of, ‘Oh you’re playing that one, who played that in the original?’ You know? The guys really threw themselves into these characters individually – they did such a great job. And it’s turned out to be a real hoot, it’s wonderful. And it’s so nostalgic, you know, it’s an homage to the original but it has its own thing going on as well.

You had to step into the sea?
I had a swim in the sea yeah.

It must have reminded you of Mumbles Bay?
Yeah it’s like childhood memories.

What was it like being back filming in the UK?
It was everything I hoped it to be. It was all these great actors, so professional, that knew what they were doing – we were laughing all the way through it. It just reminded me how much I love being in the UK to work and to be with British actors. It’s nice to come home.

Have any of the family seen the film yet?
Yeah my son’s seen it and my husband’s seen it but we saw it all together, so I’m looking forward to seeing it tonight with an audience because this is the kind of movie you want to see with an audience, and literally I’m excited. And all my family, my mum and dad and my brother… my niece came in from Berlin this morning, so we’re all going to be en masse watching it just like the old days.

Do you think comedy acting is one of the most difficult skills to master?

Yeah, for sure, and it never gets enough credit as it should. The way that, you know, me watching Toby (Jones) play with the material is just fantastic. It was so much fun.

You’ve been involved in so many blockbuster films, do you think this film will have an American following?
Oh I hope so but you never know, but I hope so. I mean since I’ve made the movie, I’ve been around, not literally around the world, but I’ve been to so many places and met expats and they’re all excited, you know, the expats around the world. But I think it’s such a charming, heart-warming story. Even though it’s extremely British, there’s something very, very touching about it.

Did you feel much pressure taking on a role in what is possibly the most beloved sitcom of all time?
No I didn’t. I think it’s because it’s such a wonderful heart-warming story. It needs air to breathe on the big screen, it does, and it does it beautifully in the film. This is not a copycat, this is not actors impersonating. The cast in this film is incredible. It’s a wonderful homage to the original but it has a real special sense of its own. It’s just a lot of fun. I think it will inject a whole new generation of lovers of Dad’s Army.

So the rest of the year Catherine, what’s the plan for 2016?
Oh I’ve got so much to do. I’m excited about this one.