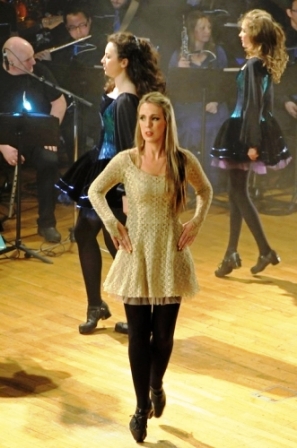 Dance instructor Catriona Newcombe sees her younger self in the faces of her students.

Whether in Singapore or Hong Kong, where she runs branches of her Echoes of Erin dance school, Catriona Newcombe sees the eagerness and curiosity of her young students and is reminded of her own childhood in Northern Ireland.

“I was eight years old when the Chieftains and Michael Flatley came to Ballycastle in County Antrim to perform in our town hall,” she recalls fondly by email. “Being a very small town, we had never seen anything like it. I was simply in awe of the spectacle, and I remember going backstage afterwards to get Flatley’s autograph. I knew right then and there what I wanted to be when I grew up.”

As grand as the performance was that particular evening, it wasn’t Newcombe’s first exposure to the ancient Irish art form.

“I started dancing at two and one-half years old. From when I can remember, I watched my older sisters practice steps for hours on end. I couldn’t wait to get started.”

Today, at 42, she has made it both her passion and profession.

“I have worked most weeks, seven days a week – and I have loved every minute. To be able to share my love for Irish dancing with the world brings me an amazing sense of accomplishment.

“It’s not only about teaching Irish dance though – at times I feel like an ambassador for Irish music and language.”

Her claim carries weight; Newcombe has danced and taught in Ireland, Scotland, England, France, America, Dubai and Taiwan, as well as in Hong Kong and Singapore.

At first, traditional Irish dance was all that was available to her.

“I went on to study performing arts and dance as part of my honors degree, and based my dissertation/thesis on the history and development of Irish dancing since the 12th century. I shadowed Riverdance, which had only just formed, and I was hooked.”

She points out she was trained as an Irish festival dancer, like lead dancer Lauren Smyth of Riverdance fame.

“It is a style that most people have never heard of, and I was even told it wasn’t “real” Irish dancing many times. It has been great to see someone like Lauren showcase this style so brilliantly, a true emissary for festival dancing.”

Highlights of her own career include being named a champion festival dancer, a European champion, and runner up in the world championships. It was only natural that Newcombe would transition into teaching, first in Florida and California, and then opening her own dance school in the United Kingdom. Later, she founded the very first Irish dancing troupe in Asia, The Celtic Bauhinia.

“We have performed alongside Brian Kennedy, Davy Spillane, The Chieftains, Cara Butler, and more recently with Mairead Nesbit (Celtic Woman, Lord of the Dance) and Stephen Scariff in Hong Kong.

“I love to reach out to the local kids as much as possible. I now teach a large range of multicultural children, and to witness them becoming so interested and involved is more than rewarding – it is empowering.”

She notes that interest in Irish dancing and culture is much more widespread than when she was a youngster.

“It is increasingly popular in Asia, for sure. This year, our Hong Kong feis welcomed dancers from Japan, China, New Zealand, Russia and beyond. And Singapore recently hosted its first feis.

“I am also encouraged to see that kids are really drawn to the actual performance side of it. They realize that it isn’t all about competition, rules, big wigs and fake tans.”

She explains that – as school standards are very high in Asia and students work exceptionally hard on their studies both in the classroom and at home – dance offers them a healthy outlet.

“What we do is about trying to take the stress away from the kids and help them find a balance between school and leisure. However, that doesn’t mean the standard of our performance is any lower.”

Newcombe says she enjoyed great support from both the Hong Kong Irish community and the St. Patrick’s Society. And though she now resides in Singapore, she returns to Hong Kong every few weeks to work with the instructors at her dance school.

“I am very new to Singapore, but am confident that the community here will take us under its wings in the near future.”