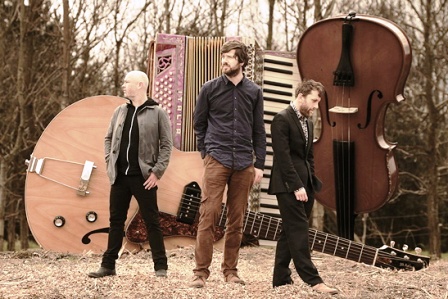 The world’s largest winter celebration of Celtic music opens this week in Glasgow with a celebratory concert bringing together a line-up of Scottish singers that will never be repeated, as well as more than a thousand school children enjoying a free morning concert.

Throughout the rest of the city musicians are rehearsing for an incredible first weekend of concerts and events – for only the first of 18 incredible days making up Celtic Connections 2016.

2,500 world, traditional and roots musicians from countries around the world will gather for concerts, ceilidhs, talks, art exhibitions, workshops, free events, late night sessions and a host of special one-off musical collaborations on 26 stages across Glasgow.

This morning more than 1,200 children saw the first of the festival’s free morning concerts as part of Celtic Connections’ award winning Education Programme. Pupils from across Scotland – including school groups from as far away as Dunoon, Fife and Ardrossan – will come to the Main Auditorium at Glasgow Royal Concert Hall  to enjoy a fantastic set of traditional music by two-time winner of Scots Singer of the Year Siobhan Miller and her six-piece house band. For many of the children this will be their first experience of seeing a professional band live.

This evening the Opening Concert for Celtic Connections 2016, The Carrying Stream, celebrates the 50thanniversary of the pioneering and hugely influential Traditional Music & Song Association of Scotland (TMSA). A stellar line up of Scottish singers including Arthur Johnstone, Sheena Wellington, Jimmy Hutchison, Barbara Dickson, Shepheard, Spiers & Watson, Kris Drever, Adam McNaughtan, Mischa Macpherson and Malinky, along with international guests Sam Lee, Thomas McCarthy and Rayna Gellertwill take to the stage of the Main Auditorium. Led by musical director Siobhan Miller, this show seeks to capture the unique spirit of TMSA concerts that have been a hugely important part of her life, and the lives of thousands of musicians across Scotland.

During the day, The Chieftains and special guests including John Sheahan and Declan Ò Rourke will be rehearsing for their Friday night concert at Glasgow Royal Concert Hall, Ireland 2016 which is also taking place as part of the Culture Ireland 2016 Centenary Programme.

Glasgow three piece the Errors are getting ready to play on home turf at the O2 ABC on Saturday evening, while Canadian roots fusion combo The Duhks make a hugely welcome return to Celtic Connections at their Saturday night concert at the Old Fruitmarket.

Sunday night’s concert at Glasgow Royal Concert Hall will bring together Malian Kora soloist Toumani Diabaté, whose music is built on a 700-year tradition, with the Royal Scottish National Orchestra in one of many unique collaborations featuring throughout the festival.

The weekend also sees a diverse range of shows by artists including star of New Americana Sturgill Simpson, the first Welsh winner of in the contests history of a Radio 2 Folk Award of the Year, 9Bach and the passionate Nashville-based singer songwriter Ron Pope and his band The Nighthawks.

Other highlights this year include performances by Rickie Lee Jones, Lau, and The Unthanks; Robert Plant and Bernard Butler among a line-up giving tribute to Bert Jansch, one of the most influential British guitarists; Kris Kristofferson and former Be Good Tanya Frazey Ford on the bill for Roaming Roots Revue. A selection of some of the most acclaimed traditional musicians will also, as always, continue take centre stage throughout the festival including Skipinnish, Anne Lorne Gillies, Gillebrìde MacMillan & Kyle Carey, and Blazin’ Fiddles.

“From the newest talent and cult leaders to the scene’s legends and greats, Celtic Connections 2016 is once again bringing a cross section of both the vibrant Scottish music scene and world’s leading trad, folk and world music artists, to venues across Glasgow for 18 amazing days,” says Donald Shaw, Artistic Director of Celtic Connections.

“As well as presenting fantastic music, the festival every year seeks to bring together different cultures, countries and communities through the shared experience of music, to share, to learn, and to celebrate together.

“It will be hugely enjoyable and I’d encourage everyone to join us, especially if you’ve never experienced Celtic Connections before.”

Councillor Archie Graham, Chair of Glasgow Life, agrees. “Once again Celtic Connections promises to be an incredible celebration of the very best of Celtic music and culture, showcasing not only leading Scottish talent but also an eclectic mix of artists and performers from across the world.

“Year on year the festival continues to grow and with such a diverse program there is something for everyone. This year is no different with artists from across Scotland and as far as New Zealand and Ghana coming together for 18 days of sensational performances. That is why Celtic Connections remains one of the world’s best loved winter music festivals.”

Ian Smith, Head of Music, Creative Scotland, adds “Celtic Connections is one of the world’s great music festivals and to have established such a global presence in a comparatively short time underlines its place as one of Scotland’s creative treasures.

“With a truly international program the festival represents all that’s great about Scotland’s cultural identity expressed so brilliantly through its music.

“Don’t miss out on a chance to be thrilled and inspired by fantastic music from around the world over the next few weeks in Glasgow.”