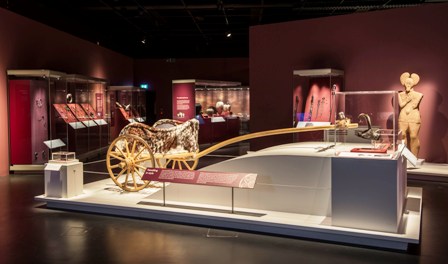 On Thursday, June 23 of this year, I had two important entries in my diary. The first was to visit the Celts exhibition at the National Museum of Scotland in Edinburgh. The second was to cast my vote in the referendum to decide if Britain would remain part of the European Union or would leave in what has become known as Brexit. As I drove to Edinburgh that day these two things seemed unconnected, but as I walked into the gallery housing one of the most stunning exhibitions I have seen in recent years they became inextricably linked in a way I had never considered.

Celts is an incredible exhibition with more than 300 stunning objects brought together from across Europe, spanning a period of 2,500 years. It is as thought-provoking as it is mesmerizing.

I imagined the speed of the reconstructed Newbridge chariot – the original was built around 400 BC and was part of the first recorded Iron Age chariot burial in Scotland, and the oldest in the UK. Elegant and sleek, its sensuous, wooden curves and colourful hide-clad carriage bear all the hallmarks of the iron-age equivalent of a modern day sports car. I sensed the strength of the German Glauberg warrior immortalized in a frightening life-size statue, and I heard the terrifying sound from a carnyx – a tall, decorated horn used to intimidate enemies in battle. The feeling of power of a warrior-people was further emphasized in elaborate shields, swords and oversized headgear.

All of this was counterbalanced by the delicacy and exquisite artistry of the many smaller exhibits. Switching my gaze from the gold brooches – featuring warriors and wild animals to the elaborate geometric patterns in gold filigree, silver and amber of the Hunterston brooch – it was difficult to fathom the skills needed to create such masterpieces. Similarly, the craftsmanship evident in the four gold torcs discovered in Blair Drummond, Perthshire in 2009 was astonishing. These magnificent items of jewelry – found by an amateur metal detectorist on his first outing- show artistic influences and skills from Scotland, Ireland and southwest France.

Along with being a collection of amazing Iron Age objects, the exhibition asks the deeper question; who were the Celts?

It was the ancient Greeks who first coined the term Celts around 500 BC. Herodotus, the father of history, used it to describe people living near the source of the Danube. Later, Julius Caesar became the nemesis of the tribes of Gaul, noting that some referred to themselves as Celts. Subsequently, other historical documents place the Celts or their influence across much of modern mainland Europe stretching to the fringes of the former Roman Empire on the Atlantic coast.

As such, are we to assume that a single group of Celts spread across the whole of Europe, bringing a cultural and artistic homogeneity with them?

The case presented in the exhibition is that there is no archaeological evidence to support the concept of a unified Celtic people. Recent DNA profiling also confirms that there is no common ancestry amongst the people of lands that regard themselves as Celtic. Yet the objects on display, which were gathered from across a huge geographical area and over a large time span, display many similarities of ideas, shared technical skills and stylistic interpretations. So what is happening?

Prior to the expansion of the Roman Empire, and the Christian religion that came with it, the tribes of Europe were evidently well connected. Many of the pieces in the Celts exhibition have been created with materials found far from the source of the object’s discovery. Similarly, some of the skills used to create these items belonged to craftsmen in distant lands. Many of the exhibits symbolize power, wealth and status, and are the consequence of important trading routes and the sharing of artistic styles and cultural diversity. Thought processes – such as chariot burials – are shared amongst distant peoples, and torcs made in southwest France appear in Scotland. These are only some of the many examples that exist. The Romans brought with them even greater trade benefits, along with further erosion of former boundaries. People were adapting to influences from afar, but interpreting them in ways that still permitted their own unique character and culture to show.

Perhaps the stunning Gundestrup cauldron found dismantled in a bog in Denmark best exemplifies what was going on at the time. Dated between 150-50 BC, it measures 69 cms (27 ins) in diameter and 42 cms (17 ins) in height. At first glance this is a truly impressive feasting vessel. But it is also much more significant in that the cauldron is constructed of seven outer and five inner silver plates, into which have been hammered or stamped enigmatic scenes depicting gods and goddesses, sacrifices, animals, warriors and carnyces. These characters, stories, myths and legends are the foundations of a belief system that was immensely important to the vessel’s creators and users. This was a highly treasured piece that had been carefully hidden and possibly given up as a votive offering in a bog – an ancient place of spiritual significance. Although the Gundestrup cauldron displays what we regard as Celtic influences, its imagery also draws from many other traditions and cultures, including some from the Middle East. It represents a powerful fusion of cross-cultural ideologies and craftsmanship. Furthermore, the materials and skills used to craft it were located far from Denmark. The silver and the method of manufacture suggest it was created in modern day Romania or Bulgaria.

This is where Celts presents a conundrum; one can conclude that the concept of Ireland, Wales, Scotland, Cornwall, Isle of Man, Brittany and Galicia being Celtic lands is an erroneous 18th century attempt to explain the cultural similarities between these territories and also their differences when viewed as part of the wider European picture. It is an impression further compounded by romanticized, Victorian myths. So the message of Celts is that there was no unifying European Celtic race or culture.

However, this is at odds with what I saw. There are torcs, bizarre animals and musical instruments on the Gundestrup cauldron that I saw on other exhibits from across Europe. Likewise, sophisticated and remarkably similar geometric patterns appear on apparently unconnected shields, jewelry and headwear. So, if I was not witnessing the art of a definable Celtic people then I was witnessing several groups of people that are connected intrinsically through trade, art and culture while still retaining elements of their own individuality and uniqueness.

To what extent do cultures and peoples have to overlap before they become defined collectively?

The lands at the western extremities of the Roman Empire relied less on difficult trading routes across occupied territories than on the easier option of trading across the seas. All the modern, so-called Celtic lands are connected by relatively short sea crossings and so it could be expected that while retaining their own cultural identities they would be influenced by what was going on in the lands of their immediate sea-faring neighbours and partners. In this way, a sense of a shared identity evolved. That is not to suggest that the wider European picture did not influence them, for undoubtedly it did.

As I drove home that evening I considered the Victorian, romanticized notion of the Celts and the artifacts of a stunning exhibition. Perhaps it is our cultural connectedness rather than any genetic grouping that defines us as Celts. Maybe it is the cross-cultural sharing between a group of sea-faring lands on the edge of the Atlantic Ocean that makes us what we are. I believe that each of the Celtic lands has a unique but shared heritage, and even if it is a romanticized view, I am happy to call myself a Celt. Erroneous as the origins of that modern title may be, it provides a sense of identity and the opportunity to embrace and celebrate what it is that sets us apart from other cultures. But I also know that my Celtic heritage is connected to and – at least in part – born of a wider European history and diversity.

I called in at the polling station that evening, collected my voting slip and made my mark. I concluded that I am proud to be labelled a Celt from a unique country that shares its cultural roots with a cluster of like-minded coastal lands that in turn are connected historically and inextricably to modern day Europe. The following morning I arose to the news that the political map of Europe was changing again, and although the full implications of Brexit will only become apparent in the months and years ahead, I take solace in the fact that the Celts – whoever they were and are today – have helped shape a continent for over 2,000 years and will continue to do so for a very long time to come.

Celts at the National Museum of Scotland until September 25