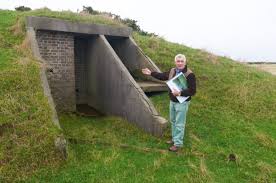 Born and raised on the Isle of Man, Charles Guard left home as a student but returned to make a 25 year contribution to preserving and sharing his native culture.

A talented musician, broadcaster, film-maker, recording engineer, editor and public speaker, Charles Guard recently retired as an officer of the Manx Heritage Foundation – now known as Culture Vannin – but his newly found time off sounds strikingly like more of the same.

“I am involved in a number of new projects, including a film using the latest drone technology. I will be publishing two more books and giving a series of lectures, as well as fulfilling a commission for the Isle of Man Symphony Orchestra.”

In acknowledging his many contributions, current chairman of Culture Vannin Phil Hawke said that Guard had helped the island people “reinterpret and rebuild our understanding of what it is to be Manx.”

Guard credits “the loose way” in which the parliamentary act that established the cultural foundation was written with giving him the freedom to branch out creatively.

“It allowed me to be very creative in dealing with academics and authors, designing and publishing books, making films and composing music and much else. All these activities would have been my hobbies if I had simply worked in a dull job. However, as it turned out, they were what I was paid to do.”

As a student at the Royal College of Music in London, Guard was taught English folk songs.

“It was then that I decided to explore the traditional music and culture of the Isle of Man. It wasn’t something I had been taught at school, so I was very surprised to learn there was a huge untapped wealth of distinct Manx culture to explore.”

After a couple of years in Ireland studying the Irish harp, he returned to his homeland. He credits a job at Manx Radio, where he hosted a daily current affairs program, for turning him on to local history and culture. From radio he moved on to work with a film company making documentaries and dramas for British television.

“I was an associate producer and wrote a lot of the music for the programs. I also started making my own documentaries as writer, presenter and editor. A position became available to run the Manx Heritage Foundation. I took the job and was able, over 25 years, to develop the foundation and expand it to the organization it is today.”

Convincing politicians, who pinch the purse strings, that the preservation and promotion of culture should be taken seriously by a nation was a never-ending challenge.

“When I took over the job there were few resources for island schools to use when teaching Manx culture and history,” he notes. “Over the years we have rectified this with many videos and publications. More than 30 books have now been published and circulated around the world to the Manx Diaspora.”

Guard recalls the excitement that came with the delivery of each new resource.

“I think the moment a pallet of newly printed books arrived, or a case of new DVDs were delivered, was always one of anxious delight. When you open the first box to check the stock, seeing how marvelous it looks, but dreading in case there is a spelling mistake on the sleeve that you only now discover.”

Because of these efforts, he is certain that the interest in Manx history and culture continues to grow.

“It is all a matter of making material available to people, creating the opportunities for workshops, performances and other outlets, and offering encouragement, sometimes financial, wherever possible.”

“The challenge is also to make the old tunes, the language, the things regarded as in the past, fresh and relevant for today, using all the latest social media and technological advances.”

There is much still to be done, he concedes, but the past few decades have brought a remarkable resurgence.

“The whole scene of Celtic culture has changed beyond recognition. The number of festivals, government support groups, recordings and videos has grown exponentially and everything is now on a much more secure footing.”