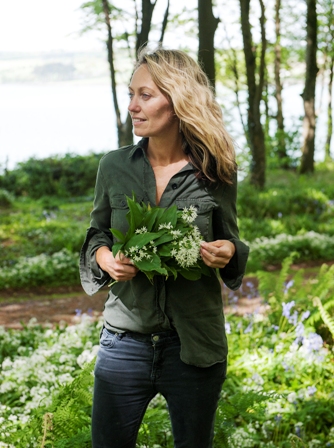 Sitting in The Old Triangle pub in Halifax, Nova Scotia, Chef Clodagh McKenna reminisces about her childhood in Cork, Ireland. McKenna is in town to film a television appearance featuring recipes from her latest book, Clodagh’s Irish Kitchen. The now-renowned restaurateur began her culinary journey as a youngster.

“I grew up in a house where we cooked every meal at home,” she recalls. “On Saturday mornings it was baking: we would bake the rock buns, bake the sponge cake, bake breads or biscuits.”

McKenna emphasizes that although she savoured shuffling around the family kitchen, it was hard work.

“It was done because my mom just wanted to make sure that we had good wholesome food in the house. To this day, I still remember the smells of those rock buns.”

Rock buns, as she describes them, are savoury and sweet scones made with nutmeg, cinnamon and dried fruits. McKenna has a version of the recipe in her new book.

“When I make it, and that smell is around the kitchen, there’s nothing else that can transport me back to my childhood. That is one of the things that is so beautiful and so evocative – and so important – about food.”

McKenna still loves traditional Irish dishes, but after almost two decades of cooking, her catalogue goes well beyond rock buns. After graduating from New York University, she returned to Ireland for formal culinary school and chef training. There, she fostered her fondness for farmers’ markets, before leaving to study at the Slow Food University in Italy, where she remained for three years.

“What was great about living there is that the Italians are so focused on seasonal food, and on the origin of their ingredients. That is the biggest thing I took from my time there.”

After returning to her home country, McKenna opened Clodagh’s Kitchen restaurant in Dublin.

“It was then that I really started to concentrate on my interpretation of Irish food,” she explains.

“I have a real passion and love to create dishes and recipes that people from all around the world will be able to make and enjoy.”

Today, McKenna splits her time between her Dublin, London and New York, making regular television appearances to share her fervour. She has appeared on various cooking and talk shows, and has starred in her own television series as well.

“It was never something I even thought about doing; television just really happened organically. I was so immersed in the food scene, that when the opportunity arose, it all just happened naturally.

“I love television. I love what you can communicate and I love making people feel good,” she continues, pointing to a recent UK television spot, during which she made a variation on her bread and ice cream. Within two days, over 300 people had contacted her through Twitter with photos of the bread they had made.

“That gave me so much pleasure,” McKenna smiles. “It’s why I do it. I know how food can enrich people’s lives.”

Soda bread, a full Irish breakfast, and potato dumplings with spicy Cashel blue sauce are just a few of the finds in her latest literary effort.

“It’s a fresh take on traditional recipes,” she says of Clodagh’s Irish Kitchen. “These would be considered your ‘go-to dishes’.”

And though she has seen a deep appreciation for Irish culture across the globe during her travels, McKenna wishes food played a bigger role in that love of the Emerald Isle.

“What I want is for people to go beyond the beer culture of Ireland, which is actually a very small aspect of life there. The real deal in Ireland is the cooking. When you visit, and you stay there for a time, you come to understand that everything revolves around the kitchen table.”

As it is at home, she encourages people to create their own culinary customs.

“If you don’t already have a cooking tradition in your family, you can start one. My hope is to help push that process along; people can make my soda bread every week, or make my Guinness cake on different occasions.

“I would love to see more people cooking Irish and bringing that food into their life.”